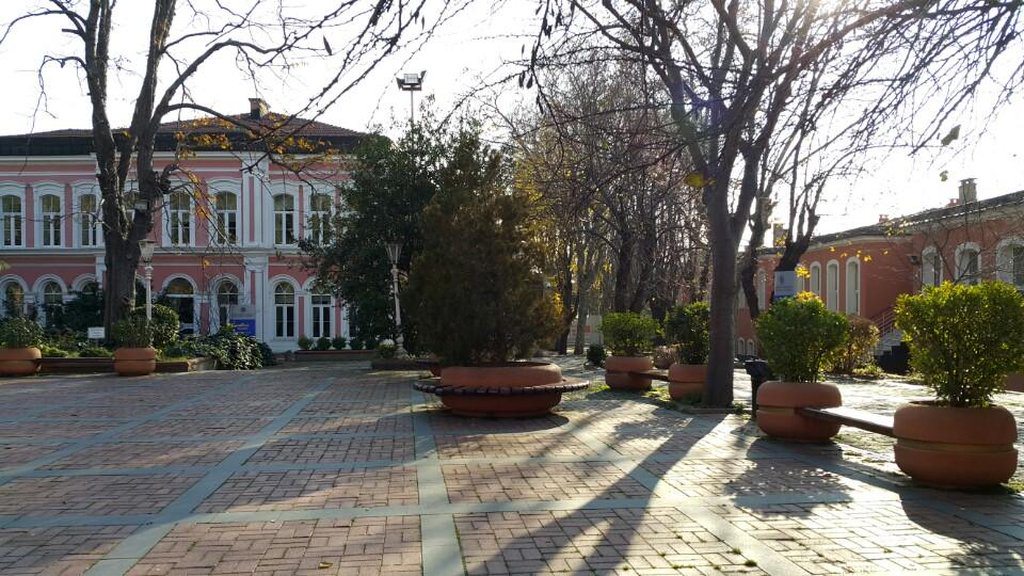 The grove on Beşiktaş Hill was first used as a hunting area by Ahmed I, who had a small pavilion built here. When Sultan Abdülhmid II acceded to the throne he moved to Yıldız Palace in 1877 since he did not find Dolmabahçe Palace, where his brother and uncle were dethroned, secure enough.

Yıldız Palace is the fourth permanent residence of Ottoman sultans and it is actually a complex within gardens and the grove comprising palaces, pavilions, administrative, security and service buildings and parks whichcovers an area of approximately 500,000 square meters expanding from the Beşiktaş coast towards the north-west encompassing the entire hillside.

The so called “Yıldız Palace” is not a single palace but rather a series of palaces, pavilions and gardens, spread out in a 500 000 m2 wooded area in Beşiktaş district of Istanbul. The history of Yıldız Palace and environs goes back several centuries, but the renovation and construction of new buildings which started during Sultan Abdulmecid’s reign in the Nineteenth Century climaxed with Sultan Abdulhamit’s coming to power in 1876.

During his thirty three years in power Yıldız area was decorated by the Palace Architect Sarkis Balyan; with two Neo Gothic style mosques, several pavilions and kiosks and gardens. However starting with 1894 the Italian architect Raimondo D’Aronco made a lasting effect in Yıldız with his Art Nouveau style buildings. The most significant of D’Aronco’s buildings in Yıldız is without a doubt is the Ceremonial Pavilion of the  three unit Chalet Palace. The third unit of the palace was constructed for the honor and use of Kaiser Wilhelm II  during his second visit to Istanbul in 1898.

This palace unit  with it’s sixty rooms and four meeting halls is an extension  of  Sarkis Balyan’s second unit and in perfect harmony with it. The Palace Theater and Opera Building also inaugurated during Kaiser Wilhelm’s visit, is one of the best examples of D’Aronco’s Art Nouveau style in the interior decoration of buildings. Sultan Abdülhamit not only entertained his family here by bringing opera and theater companies from Europe but also foreign dignitaries  and important visitors were often invited to enjoy these shows.

One of the most beautiful buildings he designed in Yıldız , with the wooden window shutters and engravings on the eaves, is the Yaveran pavilion. This two story wooden unit was built to accommodate high ranking officers and aides decamp and officers of the palace. The Lemon Nursery, the glass building  right at the entrance of the Harem gate in Yildiz is also one of his very creative designs.

Another example of his mastership in the implementation of  Art Nuoveau is the Island Kiosk by the lake in the Imperial gardens built for the recreation of the Sultan. Finally there is the Yildiz Porcelain factory rebuilt by D’Aronco in 1896 after the earthquake. All of the equipment and technology  for the brick building was imported from the French porcelain factories of Serves and Limoges. The porcelain platters and vases made here by artisans were used in decorating the imperial  palaces of  or presented to members of European dynasties.

The Istanbul State Engineering and Architectural Academy and affiliated schools of engineering and the related faculties and departments of the Kocaeli State Engineering and Architecture Academy and the Kocaeli Vocational School were merged to form Yıldız University in 1982. The new university incorporated the departments of Science-Literature and Engineering, the Vocational School in Kocaeli, a Science Institute, a Social Sciences Institute and the Foreign Languages, Atatürk Principles and the History of Revolution, Turkish Language, Physical Education and Fine Arts departments affiliated with the Rectorate.

Our university was renamed into Yıldız Technical University in 1992. The Engineering Faculty was divided into four faculties and restructured as the Electrical-Electronics, Construction, Mechanical and Chemical-Metallurgy Faculties and also included the Faculty of Economics and Administrative Sciences within its organization. The Kocaeli Faculty of Engineering and the Kocaeli Vocational School were released from our university to be restructured as Kocaeli University.

The Hünkar Dairesi (the Sultan’s Chamber, also known as Valide Sultan Köşkü, the Pavilion of the Sultan’s Mother, or Hünkâr Sofrası, the Sultan’s Table) was given to the newly established Yıldız Technical School in 1937 and is today used as the Rectorate Building of Yıldız Technical University. The Çukursaray (the Hollow Palace, also known as Hanım Sultanlar Dairesi, the Chamber of the Sultan’s Wives), the Bekar Sultanlar and Şehzade Pavilions (the Bachelor Sultans and Prince’s Pavilions), Sünnet Köşkü (the Pavilion of Circumcision Ceremonies), Damatlar Dairesi (the Chamber of Grooms), Agavat (the Pavilion of Aghas) and the Kiler-i Hümayun (the Royal Cellar) are the other buildings used by our university.

These scripts and photographs are registered under © Copyright 2018, respected writers and photographers from the internet. All Rights Reserved.
Posted by ISTANBUL, Extended On Two Continents at 7:08 AM