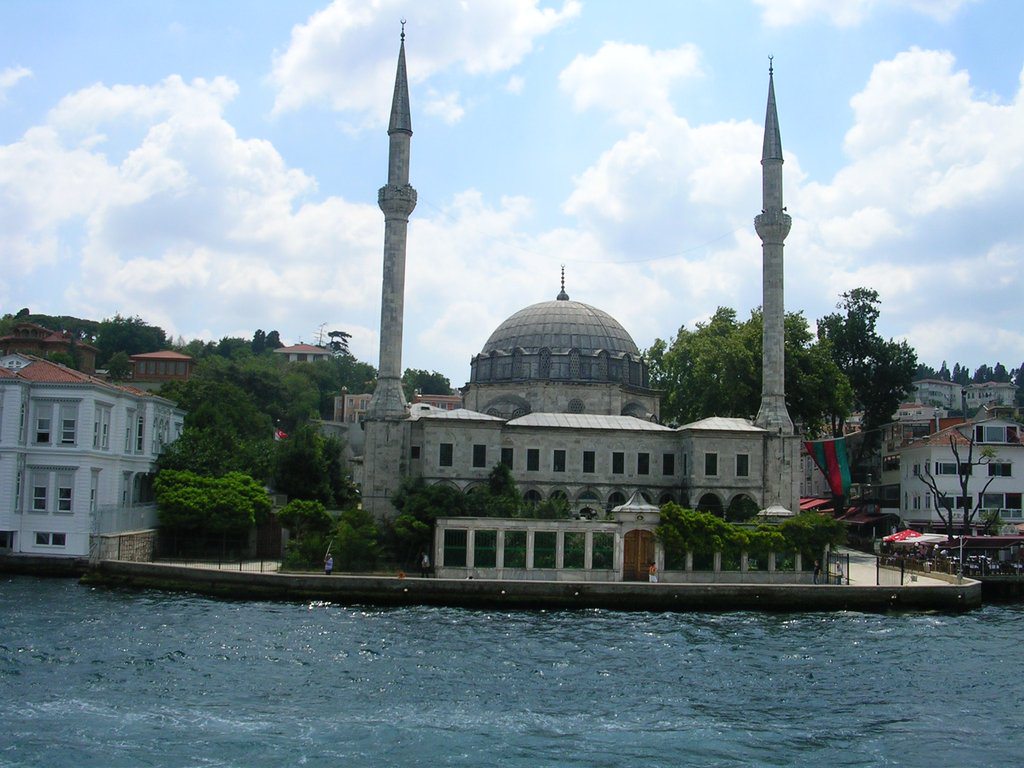 Beylerbeyi Mosque (Hamidi Evvel Mosque) is located on the Anatolian shore of the Bosphorus next to the Beylerbeyi quay. The mosque was built by Sultan Abdülhamid I (1725-1789) in memory of his mother, Rabia Sultan, in the middle of the 18th century. The architect, Mehmed Tahir Ağa, started the construction in 1777 and completed it in 1778. Abdülhamid I and his son Mahmud II usually performed Friday Prayer in this mosque.

After the collapse of the Istavroz (Cross) Palace in the middle of the 18th century, which had previously been standing on the present site of the Beylerbeyi Mosque, the Beylerbeyi Mosque was built on the site of the Hırka-i Şerîf Chamber (private chamber of the cloak of the prophet Muhammad pbuh), which had been carried to Istavroz Palace by Sultan Ahmed I (1590 -1617).

The last prayer section of the Beylerbeyi Mosque was converted into its present state, the single minaret was pulled down, and instead of the previous single minaret, two new minarets were erected on both sides of the mosque during the period of Sultan Mahmud II (1784-1839). Additionally, Sultan Mahmud II added a muvakkithane (time-keeping room) as well as a fountain located on seaside of the complex.

The mosque is constructed in Baroque style, of cut stone. It is octagonal in shape with two minarets and 55 windows. There is just one dome with the area in front of the mosque niche covered with a half-dome. The interior is decorated with inscriptions and engravings. The mosque is covered with both Ottoman and European glazed tiles. It is a fine example of the meeting and merge of different cultures.

The last prayer section of the Beylerbeyi Mosque was converted into its present state, the single minaret was pulled down, and instead of the previous single minaret, two new minarets were erected on both sides of the mosque during the period of Sultan Mahmud II (1784-1839). During renovations conducted in 1810, a room for the mosque’s timekeeper (muvakkithane) and a fountain were added.

Sultan Mahmud II added a time-keeping room as well as a fountain. The ceiling of the central prayer area of the mosque has a size of 14.60 by 14.60 meter. The ceiling consists of one large dome and five half domes. The part of the mosque containing the large dome is extraordinarily placed on two cranks and twenty windows illuminate the interior of the mosque. The windows create a beautiful, sacred atmosphere.

Because of this unique feature, the mosque has become a popular landmark for tourists. There are two fountains on each side of the gate that opens on Yalıboyu Street. To the left of the entrance is a mounting block made of granite that was used by the Sultans. On the left there is a bathhouse. Across from the mosque there is a fountain that has two façades, one facing the sea and the other the street. It was built by Sultan Mahmud II in the memory of his father Sultan Abdülhamid I in 1811.

These scripts and photographs are registered under © Copyright 2018, respected writers and photographers from the internet. All Rights Reserved.
Posted by ISTANBUL, Extended On Two Continents at 3:23 AM