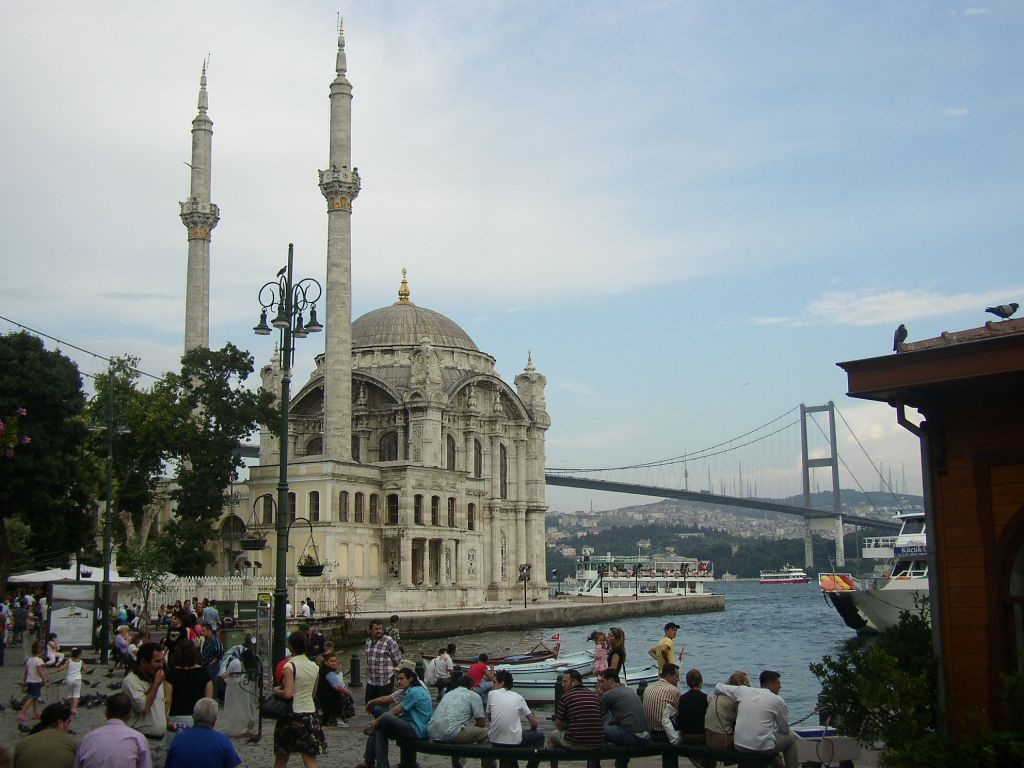 The Ortaköy Mosque (Büyük Mecidiye Camii) is situated on the waterside of the Ortaköy pier square in the Beşiktaş District, one of the most popular locations on the Bosphorus. The mosque was built on the order of Sultan Abdülmecid I (1839-1861), the ruler of the Ottoman Empire, and was constructed by the Nigoğos Balyan in 1853. Ortaköy Mosque, officially the Büyük Mecidiye Camii (Grand Imperial Mosque of Sultan Abdülmecid) in Beşiktaş, Istanbul.

It was during the same century that the mosque rose to a higher level of importance on the European side of Istanbul. It is also known as “Great Mecidiye Mosque” and is one of the most beautiful samples of the Baroque architecture in Istanbul. Previously, there was a little mosque built by Mahmut Ağa, the son-in law of the Vizier Ibrahim Paşa, on the former site of the mosque. The little mosque built in 1721 but was destroyed during the revolt of Patrona Halil in 1730.

The current mosque, which was erected in its place, was greatly damaged during the earthquake of 1894, and the spire of the minaret needed to be rearranged. When it was understood that the building was in danger of collapsing in 1960, ground reinforcement efforts were carried out. After the conflagration in 1984, it was completely restored and reattained its previous magnificence.

Designed in a neo- Baroque style, its wide, high windows let the ever-changing light reflections of the Bosphorus shine in the mosque. It is composed of a Harim (sanctum sanctorum) and a Hünkar Kasrı (sultan’s summer palace). The Harim section is composed of a square-shaped main chamber with an edge length of 12.25 m, and the middle chamber which passses through the main chamber. The ceiling of the Harim section consists of a dome construction covered with pink mosaics and the dome was placed on the main wall.

The stair cased building has two minarets with single balcony each. The walls are made of white hewn stone. The walls of the single dome are made of pink mosaics. The mihrab again is made of mosaics and marble and the mimbar is made of porphyry coated marble, all products of an elegant workmanship.  Designed in a neo- Baroque style, its wide, high windows let the ever-changing light reflections of the Bosphorus shine in the mosque.

Ortaköy Mosque, which is composed of parts of prayer hall and the sultan, was built to reflect the lights of Bosporus inside with its wide and high windows. The walls of mosque were made of white hewn stones and the walls of dome were made of pink mosaics, all of them are hand works. The mosque has a whiter appearance thanks to water conditions and the blue waters of Bosporus.

The mosque has two minarets with a single sherefe (minaret balcony) each, the niche is made of mosaic and white marble, and the pulpit is a marble craftsmanship covered with porphyry. The two-storey house, with its elliptical stairs at the northern entrance, is called Hünkar Kasrı. The Ortakoy Mosque, built in the 19th century, has reached our times as the main component onlooking the Bosphorus.

These scripts and photographs are registered under © Copyright 2018, respected writers and photographers from the internet. All Rights Reserved.
Posted by ISTANBUL, Extended On Two Continents at 5:06 AM