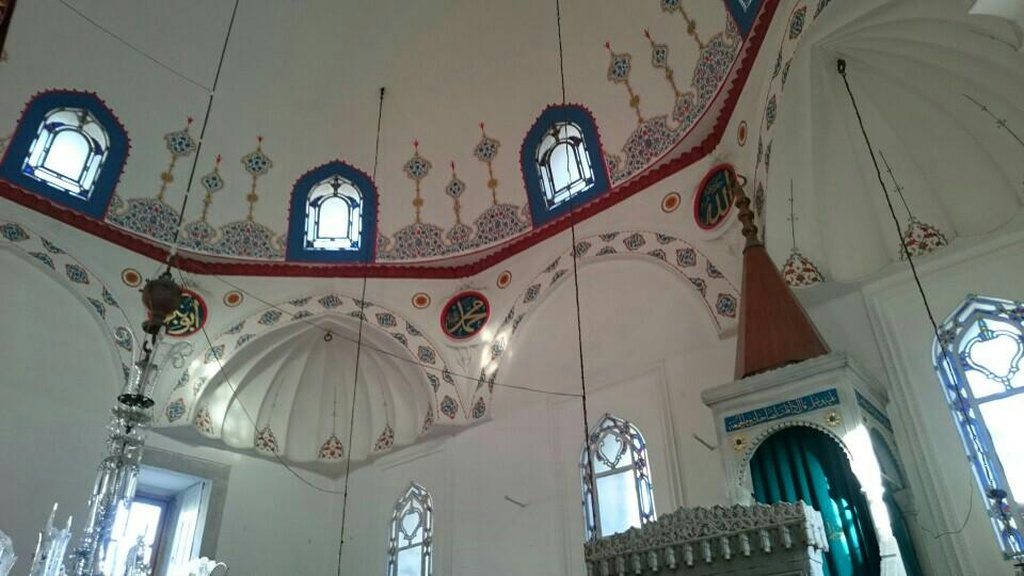 The Ahmediye Mosque Complex on Gündoğumu Street in Üsküdar, according to its epitaph, was built on the site of the ruined Kefçe Hoca Mosque by the Dockmaster Eminzade Ahmet Ağa under Sultan Ahmet III, between 1721 and 1722. The architect Mehmet Ağa constructed this out of the rubble mosque. It underwent restorations in 1864 and 1888.

One classroom of the L shaped madrasah consisting of 11 rooms is above the gate of the dervish lodge. According to records dated to 1918, soldiers and immigrants stayed in some of the rooms of the madrasah. The madrasah’s rooms were used as a hospice by the Red Crescent (Kızılay) in 1945. Today, they are used as the office of the Üsküdar Mufti. Today, some part of the medrese is used as a Qur'an learning centre and the other part is used a a soup kitchen for the poor.

A notice indicates the Ahmediye mosque was built for Maktul Ibrahim Paşa (Grand Vizier of Sultan Süleyman) for the first time. It was built in the middle of the lodges for the Janissaries. For this reason it was also called the Orta Mosque (Middle mosque). After a Ahmet Fevzii Paşa quelled a riot of the Janissaries the mosque was often called Ahmediye. The building was ruined over time, and rebuilt in an octagonal shape in 1912. A fountain in its front was built for Damat Ibrahim Paşa, the last vizier of Sultan Ahmet III. Dome, minbar, rostrum and mahfil are made of wood. Under the mosque there is a Byzantine cellar.

Ahmet Ağa, a prominent statesman who built countless fountains throughout İstanbul, the fountain is entirely made out of marble. Its very top, referred to as the crown, features rumî motifs while its outer border is made of a repeating pattern of flowers and the inner border of stylized tulips. Underneath the crown are four couplets written in Ottoman Turkish, and an additional couplet underneath them whose second half carries the tarih, the date in which this fountain was built.

Ta'liq script was used, as was usually the case when writing poetry. The letters are illuminated with gold leaf on a green background. Ahmediye Cami, added to the Üsküdar landscape during the reign of Sultan Ahmed III when it was built in 1722 for Eminzade Hacı Ahmed Paşa. The mosque itself is not especially dramatic architecturally but there is a fine sebil (water dispensary) attached to the wall outside, and the medrese and kütüphane still survive overlooking a garden courtyard.

Situated at the corner which both streets intersect, the mosque is in square form and built by unhewn stones; the minaret on the left is put up with hewn stones. The layout is rectangular and the interior was embellished with calligraphic script.  The dome of the portico is a diognal vault, and the marble mihrab and the capitals of the columns look like a ladder upwards (mukarnas) and downwards.

The wooden exterior praying ground, which is said to have been built in 1931, was removed and hasn't been renovated since then. The exterior praying ground on the left of the portal has a mihrab. On the inscription with five calligraphic lines of the year 1722, the fact that Kepçe Hoca Mescid reduced into ruins and Hacı Ahmet Ağa built this mosque in the place is written.

The other inscriptions of the mosque complex are written in "ta'lik" (a form of Arabic writing). The dome of the mosque rests on sliced squinches, each side of the octogonal frame has a window. The mihrab is a simple niche made of plaster. the marble minber is small but is a fine work of its age.

The mosque has seven windows downstairs and eight windows upstairs. The upper window on the left of the gate is also considered to be a gate to the screened-off place from the exterior praying ground.

Roughly square in layout, it has the porticoes and cells of the medrese along two sides; the library, one entrance portal, and the mosque occupy a third side, while the fourth has the main gate complex with the dershane above and a graveyard alongside; but the whole plan is very irregular because of the alignment of streets and the rising ground.

The Madrasah placed in the courtyard of Ahmediye Mosque was built between 1721 and 1722 by Eminzade Ahmet Ağa. Religious sciences; fiqh, hadith, Koran commenting, feraiz (law of inheritance) has been taught in its classroom. There is a Turkish bath adjacent to it. It's been used as a soup kitchen for a while after Republic.

At the entrance, the medrese situated on the left of the mosque's portal has two sides and eleven rooms. In front of the rooms, a doomed and round gallery is present. Each room owns a dome, two windows opening to the gallery and the courtyard, a cabinet and a cooker. At the back of the medrese, there is a toilet and there are also nine faucets for ablution on the left of the entrance.

The building of the library whose front is covered with three galleries and a dome is situated near the second door of the mosque complex in Esvapçı Street. The capitals of the columns are rhomboid. The building has eight windows below, six windows above, a cooker and two cabinets. A toilet opening to the gallery is also available. Today a public toilet is still in use under the building.

At the end of Gündoğumu Street, in a close distance to the corner, there is another unadorned fountain without an inscription. It is said that the small section on the left of the fountain is the timekeeper's clock room.

There is covered tomb of the person that had built the mosque and the complex, Kefçe Dede's open tomb and graveyard in the courtyard of the Madrasah. The cemetry in which the gravestone of Eminzade Ahmet Ağa (1730-1731) and the tomb of Kepçe Dede is located in the northern part of the mosque.