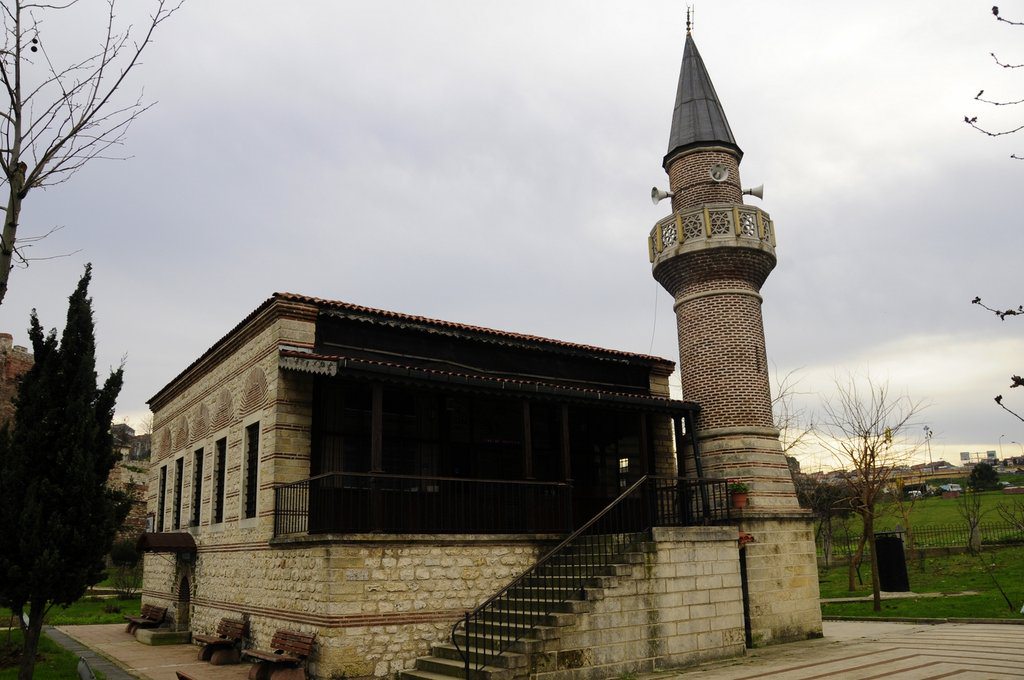 It is also called Small Mosque of Hacı Hüsrev and Small Mosque of Ümmi-Hân. The temple is out of Eğrikapı (Bent Door) and it is between this door and  Yâvedûd Tomb, in the place where Yenimahalle Street and Hacı Hüsrev Mosque Street intersect and on the right corner of Hüsrev Street. During the construction of Golden Horn Bridge and its connecting roads, it was removed together with the whole area, District of Abdülvedûd, Tokmaktepe and cemeteries excluding a couple of streets.

Since the temple was built on slanting land, it was located on the top. It is massive stone construction. On its right side, its door, its minaret made of thin bricks and facing the last assembly, only its body and bottom part of its balcony are seen. Its wooden roof was covering the temple and last place of assembly. It has no inscription.

The mosque which has remained under Golden Horn Bridge was dismantled by Istanbul Metropolitan Municipality in 1996 and moved to the point where Ayvansaray City Walls ended, near Kaab tomb and its transfer construction and restoration was completed. The mosque was rebuilt here by government decree after the nearby bridge over the Golden Horn was built in 1988.

Alongside green gardens, fountains, roses and flowery trees, the Hacı Hüsrev Mosque in İstanbul boasts the tombs of four known companions of the Prophet Muhammad as well as the tomb of a famous Ottoman soldier who died during the conquest of the city. In order to reach this mosque, you must head to the district of Eyüp, and from there, when you see the signs for Feshane and Ayvansaray, turn right immediately and park your car.

To one side of this old mosque lie the historical walls of Byzantium, while on the other side lies a modern highway. Across from it is the Golden Horn. The structure is made of stone and is actually in many ways quite modest. Most importantly, the Hacı Hüsrev Mosque offers up a unique island of calm and serenity for those who need a break from the rapid pace of İstanbul that races around them.

The moment you step into what may appear at first to be the very carefully kept grounds of a park, you will be struck by the beauty of the red roses, which may cause you to leave your cares and fatigue at the entranceway. This garden is full of fruit trees and flowers. Walk a bit further and the mosque you are looking for will be on your right. You might want to stop first at the tombs of the companions of Prophet Muhammad though. Pass the fountain to reach the tombs and look to your right.

After passing through the gate in this wall, you will have arrived at the tomb of Shaybah al-Khudri, the “milk brother” of the Prophet Muhammad. Next to this tomb are the tombs of Abu Ahmed al-Ansari and Hamidullah al-Ansari, both companions of the Prophet. And of course, at the end of where these tombs lie, there is another notable resting spot, this one of the martyr Toklu İbrahim Dede.

Right next to the mosque lies yet another tomb. This is Ka’b’s tomb. He, too, was a companion of the Prophet. This tomb looks like a tiny little mosque. In one corner of this tomb lies the empty coffin of Ka’b, while there is also an area to pray and even a mihrab (niche showing the direction of Mecca).

The Hacı Hüsrev Mosque is located across the Golden Horn with the historical walls of Byzantium on one side and a modern highway on the other. It is not quite clear exactly when this mosque was built, although the date on the Mehmet Ağa fountain that lies right next to it - built in 1691 - gives us an idea. And making things even more complicated, this mosque was originally not even here, since it was badly damaged in a fire that took place in the 1970s.

The path to the mosque lies between the Mehmet Ağa and Hacı İbrahim Efendi fountains. Just like its exterior, the interior to the mosque is both simple and serene. The windows on the left open up to the Golden Horn while those on the right give you a view of the Byzantine walls.

These scripts and photographs are registered under © Copyright 2018, respected writers and photographers from the internet. All Rights Reserved.
Posted by ISTANBUL, Extended On Two Continents at 1:11 AM