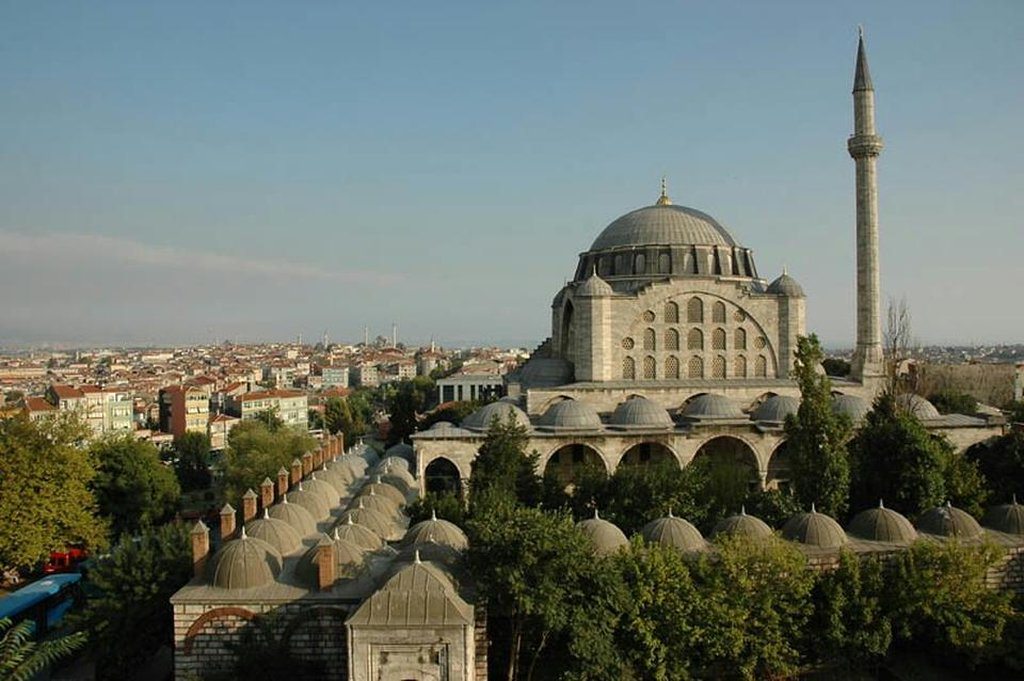 The Mihrimah Sultan mosque is located on Fevzi Paşa Street at Edirnekapı neighborhood in Fatih.. The mosque was built between 1562-1565 by the architect Sinan by the order of Mihrimah Sultan, daughter of Süleyman the Magnificent. Its construction was continued from 1562 to1565 and it had a a large amount of damage during an earthquake in 1719. The complex is composed of a large mosque, madrasah (theological school attached to a mosque), Ottoman elementary-primary school (Sıbyan Mektebi), tomb, bath and bazaar.

The complex is located on Fevzi Paşa Street at the entrance to Edirnekapı by the city walls. It is built by Sultan Süleyman, the Magnificent for his daughter Mihrimah and designed by Architect Sinan. Altough the exact date is unknown, it is thought that construction of the complex was completed in the 1560's. It was composed of a mosque, medresse, double hamam, shrine, market and primary school, many of which no longer remain today.

Built near the walls of the old city entrance and standing on one of the highest hills of Istanbul, this mosque in Edirnekapı is the second mosque in Istanbul built for Mihrimah Sultan. Commissioned by her father, Süleyman the Magnificent (1520-1566), it was designed and built by Architect Sinan and completed between 1562-1565.

The Mihrimah Sultan Mosque is an Ottoman mosque located in the Edirnekapı neighborhood near the Byzantine land walls of Istanbul, Turkey. Located on the peak of the Sixth Hill near the highest point of the city, the mosque is a prominent landmark in Istanbul.

The Mihrimah Sultan Mosque was designed by Mimar Sinan "Sinan the Architect" for the favorite daughter of Süleyman the Magnificent, Princess Mihrimah. Its building took place from 1562 to 1565. The complex has been severely damaged by earthquakes several times (including 1719, 1766, 1814 and 1894), and although efforts were made to restore the mosque, its attendant buildings received less attention. The dome was further damaged during 1999 İzmit earthquake, and required restoration, along with the upper half of the minaret.

The mosque was built on a terrace overlooking the main street. A large courtyard (avlu) whose interior portico is divided into individual cells forming a madrasah surrounds the mosque. In the center of the courtyard is a large ablution fountain (şadırvan). Entry to the mosque is through an imposing porch of seven domed bays with marble and granite columns. The mosque itself is a cube topped by a half-sphere, with symmetrical multi-windowed tympana on each of the four sides. The dome is supported by four towers, one in each corner; its base is pierced by windows. The single minaret is tall and slender; during the 1894 earthquake it crashed through the roof of the mosque.

The interior is a cube under a dome 20 m in diameter and 37 m high. On the north and south sides, triple arcades supported by granite columns open onto side aisles with galleries above, each with three domed bays. A vast amount of surface area is covered by windows, making the mosque one of the brightest lit of any of Sinan's works. Some of the windows contain stained glass. The interior stencil decorations are all modern. However, the mimbar in carved white marble is from the original construction.

The diameter of the dome of the mosque is 20 meters, and the height is 37 meters. It has an area of approximately 1000 square meters in the middle of the mosque. It has a rectangular-shaped marble pulpit (minber), and the stained glass of the windows strengthen the aesthetic appeal of the mosque. It has only one minaret with a single sherefe (minaret balcony), and that falls outside of the profile of the Sultan Mosques which were built by the architect Sinan.

It differs from other mosques of the period in that it has a single minaret. Another distinction is the large number of windows: 101 in all. The marble pulpit is one of the finest of the period. The shutters of the window and door are made of wood inlaid with ivory and mother-of-pearl.

Just behind the portico, the dominating single dome of the mosque rises thirty-five meters above the ground. Spanning 20 meters, the dome is carried over an almost skeletal system composed of four "elephant feet" (massive piers) and the arches between them. These polygonal piers, mostly projected on the façade for creation of a more spacious interior, rise to the level of the drum and increase the total mass available to support the load of the dome.

An innovative design, this addition of these structural piers allows for a shift from purely load-bearing to thinner, heavily fenestrated walls. Thus, all four tympana feature three rows of windows with seven arched windows at the bottom, five arched and two circular windows in the middle, and three arched and two circular windows at the top. The dome itself also features twenty-four windows, greatly increasing the quantity of natural light within the interior; the total number of windows in the prayer hall is close to two hundred.

Along the east-west axis, the mosque has side bays, each of which are topped by three domes. Measuring six meters in diameter, these domes sit on columns with carved stalactite capitals. The height of these side bays is almost half that of the central space, and they include three rows of windows, the same number found in the large tympana of the main dome. The mosque has a slim minaret with a single balcony constructed of stone that corresponds to the western bay of the portico.

The luminous interior of the mosque features a marble mihrab with muqarnas carvings; the minbar, also of marble, stands to the west of the mihrab niche. Chasings, restored in the last renovations, and stained-glass windows add to the interior ornamentation.

The single domed mosque, which is the only monumental and grandiose structure in the complex, has been severely damaged by a series of earthquakes in 1719, 1814, and 1894. According to records, these quakes caused a crack in the dome; the minaret and the portico collapsed. Judging by its architectural style, the portico was probably rebuilt in the 19th century. In 1719, the upper part of the minaret collapsed during an earthquake and was rebuilt. After discovering the extnet of the destruction of the domes in this earthquake, it is doubtful that central dome with many windows was rebuilt in a way of consistent with its original character.

The mosque was partially damaged in several earthquakes, including in 1648, 1690, 1714 (when its domes were destroyed), and in 1894, after which it was temporarily closed. The Mihrimah Sultan mosque was most recently restored in 1956 and 1957. The dome of the mosque, which was further damaged recently during 1999 Marmara earthquake, and restorated. The minaret is rebuilted from halfway up.

As built, the Mihrimah Sultan Mosque had a külliye (complex) which included (besides madrasah) a double hamman, tomb and a low row of shops under the terrace upon which the mosque was built, whose rents were intended to financially support the mosque complex. The complex does not include the grave of Mihrimah Sultan herself (which is located at the Süleymaniye Mosque, but a ruined türbe which is also a work of Sinan) behind the mosque houses the graves of her son-in-law, Grand Vizier Semiz Ali Pasha, as well as many other members of her family.

The Mihrimah Sultan Mosque is part of a complex, situated on a platform above its site, which includes a madrasa, a mausoleum, baths, and stores. The site is accessed via stairs leading to the courtyard through the portico. Its courtyard measures about fifty-seven by twenty-one and a half meters, and is surrounded on three sides by a portico that is one bay deep. Each bay has its own dome, for a total of thirty-six.

A medresse is located in two corners of the inner courtyard. Interestingly though, there is no schoolroom section. It is not known whether there were no schools originally or if they were removed during renovation of repairs. Apart from this, the medresse has survived intact. A building with covered by three domes in the complex is called the Ottoman elementary-primary school (Sıbyan Mektebi). The building just next to it is the tomb of Güzel Ahmet Paşa. The primary school and tomb of Güzel Ahmed Paşa are found in the right hand corner of the mosque's kıblah, a structure indicating the direction of Mecca.

A double hamam is found in the same area, but is separate from the complex. The twin bath house of the complex has lost most of its original features except its plan and its exterior walls. There are twin baths (çifte hamam) that were active until the first quarter of the 1900s.

The inner courtyard consists of 19 rooms and 2 eyvans, a vaulted room with one side open to a courtyard. The south end of the courtyard is framed by the portico of the mosque. Surmounted by seven domes, each 6 meters in diameter, the portico of the mosque contains larger bays than the enclosure portico. These 7 domes are carried by 8 columns on the north, and rest on octagonal drums.

Eleven student cells are found behind the eastern portico and nine are located behind the western portico; however, because of the site constraints, no student accommodation was built behind the northern portico. In this configuration, the madrasa functions as an enclosure, and classroom activities are shifted to the mosque.

In the complex there was a madrasah and bazaar that do not exist today. Some of the 63 shops in the bazaar are located near the northern wall of the courtyard.