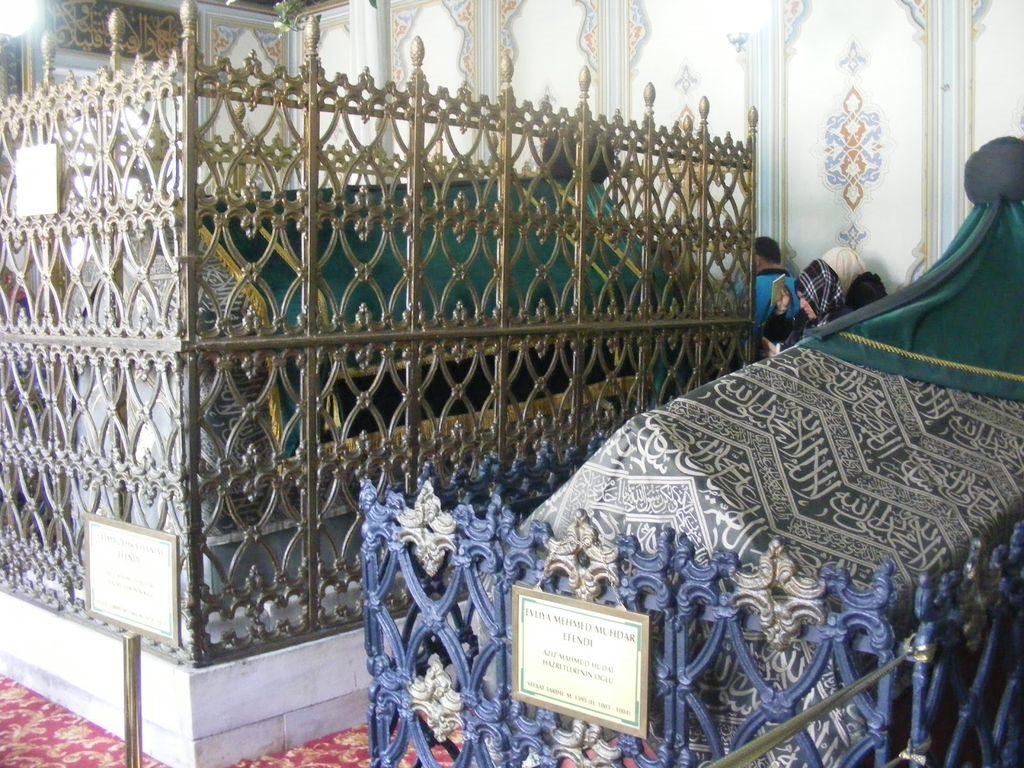 Aziz Mahmud Hüdayi (1541–1628), (b. Şereflikoçhisar, d. Üsküdar), is amongst the most famous sufi saints of Turkey, mystic, poet, composer, author, statesman and Islamic scholar. He was the Sheikh of Sultan Ahmed I who constructed the famous Blue Mosque and especially gained the respect of Sultan Murat III. He read the first Friday prayer in this Mosque on its opening.

Born in Şereflikoçhisar, he completed his studies in a medrese in Istanbul. Aziz Mahmud Hudayi served as Qadi in Edirne, Egypt, Sham (Syria), and Bursa. He was a murid and khalifah of Üftade Hazretleri.  Aziz Mahmud Hudayi died in Üsküdar, Istanbul and is buried next to his mosque. He is something of the patron saint of Asian Istanbul.

The mosque was built in 1594 by Ayşe Hanım Sultan, the daughter of Mihrimah Sultan and by the Grand Vizier Rüstem Paşa for Azîz Mahmûd Hüdâyî; it is part of the complex that consists of a soup kitchen, a mausoleum, a library, a chamber for Sultans, a fountain, dervish rooms, a house for the sheikh and a bakery that occupy in total an area of 10,000 square meters.

The mosque was built in accordance with dervish lodge architecture, and took its final shape during the reign of Sultan Abdülmecid. Over the gate of the courtyard there is the ornamented monogram of Abdülmecid. To the right of this gate there is a fountain built by Mehmed Paşa, the son-in-law of Nevşehirli Damat İbrahim Paşa, in 1724.

One of the most frequently visited religious sites in Üsküdar, the lodge offers meals to the poor and students, as well as distributing meals to the homes of the poor.

The complex, excluding the tomb, underwent major restoration after a fire in 1850. The tomb itself was renovated based on its original architectural plan in 1855 by Sultan Abdülmecid Khan. There were also restorations in 1950, 1954 and 1990. The leaden coverings of the dome were stolen in 1962 and later replaced by türbedar (tomb keeper), who served this saint of God for over two decades and who was one of the greatest masters of paper marbling.

Aziz Mahmut's spiritual presence draws tens of thousands of people from across Turkey every year. People flock to Üsküdar's Doğancılar quarter, eagerly climbing the stairs or the cobble-stone hills to visit this saint of God, paying their homage to him by reciting the Holy Quran and hoping that the supplications they make in his presence will be accepted by God for his sake.

Jelveti is the name of a Sufi order that was founded by the Turkish saint Aziz Mahmud Hüdayi. It shares the same spiritual chain as the Khalwati order and thus there are many similarities between them. The two orders split however with Sheikh Zahed Gilani, where the Jelveti order then goes on to Hajji Bayram and Aziz Mahmud Hüdayi. The Jelveti order was not a very widespread order and did not extend much further than the borders of modern Turkey having a number of tekkes in the Balkans.

Tomb
The exact date of the tomb's construction remains unknown, but according to historical accounts it was Aziz Mahmut Hüdayi himself who bought the land and had the complex built in 1598, upon his arrival from the town of Bursa, where for years he had served his sheikh, Muhammad Uftade. Located beyond the main street and surrounded by modern apartments, the modesty of Aziz Mahmut's tomb is in harmony with the humble personality of this friend of God.

Aziz Mahmut's wooden sarcophagus lies at the center of the tomb, surrounded by gilt iron railings. The sarcophagi of his five sons, four daughters and granddaughter are also located around him. His tomb welcomes visitors throughout the week.

The small, rectangular tomb's single dome, standing on four marble columns, is adorned with classical Ottoman-style ornaments. It is made up of piled stones. The upper parts of the walls of the tomb, which is lighted by seven large windows as well as a Venetian-style chandelier hanging at the center of the dome, are decorated with several inscriptions. The dome consists of 13 equal segments, which also appear on the dark green top part of Aziz Mahmud's green turban, symbolic of the Sufi order he founded.

The glass-covered entrance to the tomb is through a small room that was built in 1918. There is also a marble well on the right side of the tomb's entrance According to many people - and many books that give accounts of real Sufi stories - the wells in every asitane are miraculously connected with the well of Zamzam in Mecca.

The sign above the doorway to Hudayi’s tomb says: "This burial place is where the pure souls gather together, who come here with courtesy (adab), Oh my heart, if you want to benefit from the Divine taste, you will surely get your portion when you enter through the door of Hüdayi."

His Written Works
Meanwhile, Aziz Mahmut is also known for his Sufi poems. He has 23 known works written both in verse and prose, seven of which are in Turkish. His divan has also been published. His manuscripts are preserved at the Üsküdar Hacı Selim Ağa Library. Hüdayi wrote many books, none of which are yet translated into English, and in them he makes many references to the teaching of Ibni Arabi and his followers.

His Dua
His dua, “Those who follow my path, those who visit my tomb and recite the Fatiha, are ours. May they not drown in the sea, and not experience poverty in their old age. May they only die after saying their testimony of faith. May they know the time of their death and inform their relatives”, has prompted many sailors of the Ottoman Empire to visit his grave before going out to sea.

Safe Sea Route
Aziz Mahmut Hüdayi was and is still known to work many wonders. He once set out to sea from Üsküdar on a small boat to attend the inauguration ceremony of the Blue Mosque on a very stormy day and made it to Sarayburnu (Seraglio Point) in safety, with all the waves becoming placid along the route he took. The route he followed is still known as the "Hüdayi route" and some old boatmen still follow it in harsh weather conditions. Still showing the way for sailors.

Sufi Lodge
Going up the hill above Üsküdar, you may come across the Aziz Mahmut Hüdayi Asitanesi - as the main lodge and gathering place of a Sufi order used to be called. It is one of the most frequently visited and prominent religious monuments of İstanbul's Asian side.

This lodge is actually a part of a complex that exemplifies the Tanzimat architectural style, which flourished in the second half of the 19th century. It is located within the courtyard of the mosque that bears the name of Aziz Mahmud Hüdayi,  which spreads over a large space with no unity in its design, since different parts of the complex were built in different times.

The tekke was closed in 1925 and its assets and library dispersed. It was reopened in 1985 and is now set up as a charitable foundation (waqf), which provides for the poor of the area. They feed 3-4,000 people a day, provide medical care and medicines, coal and clothing, houses for elderly people, student hostels and Quran schools. Some of the land around, which was originally part of the waqf but was sold off when the tekke was closed, is now being reclaimed. There are also charitable foundations in other places, such as Bangladesh, and there is now a Hüdayi village which was set up in southern India after the tsunami.