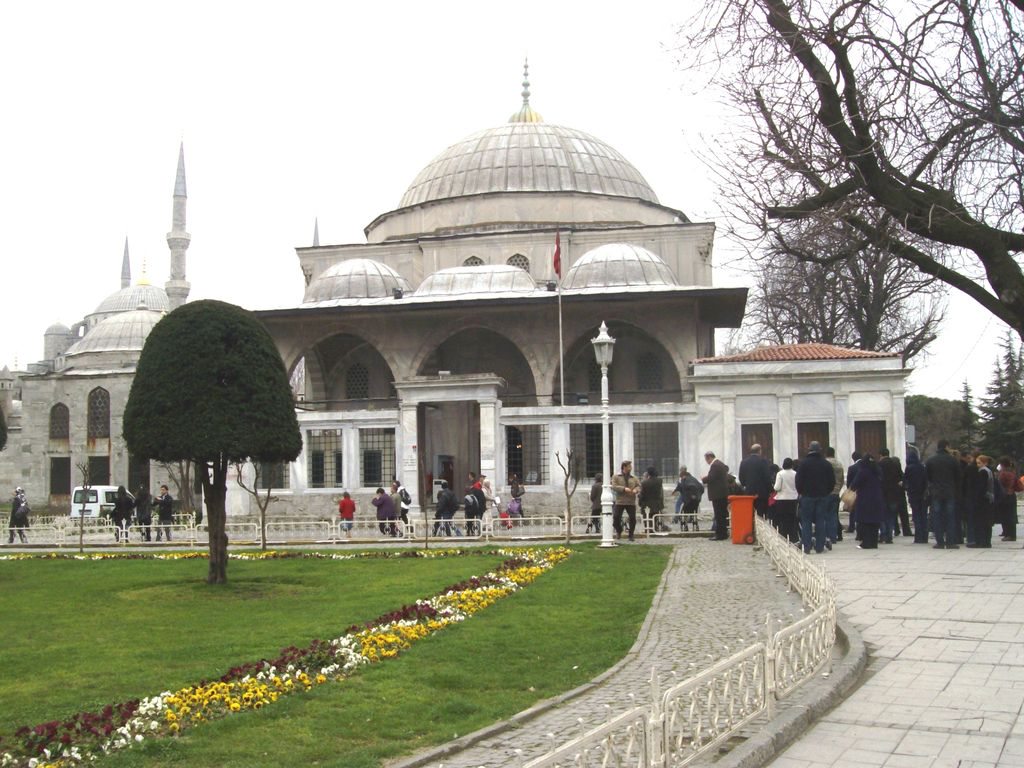 The Kara Ahmet Pasha Mosque is an Ottoman mosque along the city walls in Istanbul, Turkey. Dated 1558, Kara Ahmed Pasha Mosque, in Topkapı Street at Arpa Emini Slope. Kara Ahmet Pasha Mosque, also known as Gazi Ahmet Paşa Camii is one of Mimar Sinan's lesser-known achievements. He built it in 1554 for Kara Ahmed Pasha, a grand vizier of Sultan Süleyman the Magnificent. This is a great mosque complex which is one of the loveliest and most masterful of the works of Sinan.

This mosque is part of a külliye which is situated in the Topkapı district (alongt north-west city walls) and also includes a medrese, a primary school. The complex was built at the request of Kara Ahmet Pasha, one of Kanuni Sultan Süleyman's sadrazams (Prime Minister). The medrese and the mosque share the same courtyard while the primary school and the tomb remain at a distance from the mosque.

The courtyard is surrounded by the cells of a medrese and a dershane, or main classroom. Attractive apple green and yellow Iznik tiles grace the porch, while blue and white ones are found on the east wall of the prayer hall. These tiles date from the mid 16th century. On the three galleries, the wooden ceiling under the west one is elaborately painted in red, blue, gold and black.

Kara Ahmet Pasha Mosque is 19.3 x 26.3 m dimension. Lighted by 80 windows, the mosque is unique in İstanbul with its beautiful ceramic tiles at the entrance; 16th century penmanship of the müezzin mahfel; and its timber ceiling. The windows on both sides of the entrance rise as high as the latecomers' porch.

With the Kara Ahmet Pasha Mosque (1558-1565) Sinan attempts to improve on the Üç şerefeli and Sinan Pasha mosques by adding trompes to the hexagon structure. Another interesting aspect of the plan is that its polygon based dom is supported by independent columns. These columns stand very close to the main entrance (north) and kiblah (south) walls. The two columns on each side are linked by arches to the buttresses which rise in the middle of the side galleries.

The complex was restored by Aydınbeyzade Hasan Ağa in 1696. After the 1894 earthquake, the collapsed dome and other buildings in the complex were restored within two years. The fountain, in the courtyard, lost its features as a result of being restored.

Grand Vizier Ahmed Pasha, killed in 1555, was buried in this tomb, which was built by Sinan the Architect in 1559.

The elementary School is a single storey building with dimensions 7.6 x 14.7 m with a playground. Although it has lost its features, the Elementary School is still one of the best conserved buildings in the complex. The small mosque, built by Kara Ahmed Pasha’s wife Fatma Sultan, can be seen a little forward from the mosque. The madrasah, with 16 rooms and a classroom, must have built about 1560. The fountain, in the courtyard, lost its features as a result of being restored.