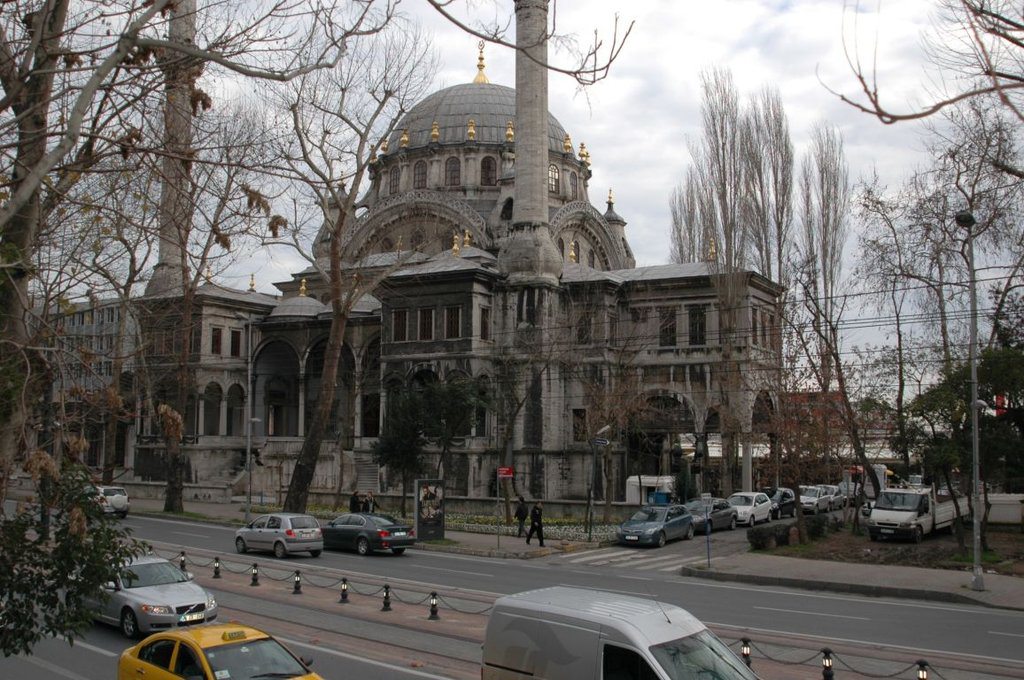 Nusretiye Mosque is an ornate mosque located in Tophane district of Beyoğlu, Istanbul, Turkey. While its architecture is influenced by Islamic elements, it retains a Baroque style, making it unique to the city. The Nusretiye Mosque was erected between 1823 and 1826 by Sultan Mahmud II (1784-1839) as part of a larger project to rebuild the Tophane artillery barracks that burnt in the Firuzağa fire.

It is located off the Western shore of the Bosphorus, below Tophane or the Canon Foundry established by Sultan Mehmed II (1432-1481) and was built on the former site of the Mosque of the Artillery Barracks (Tophane-i Amire Arabacılar Kışlası Camii) built by Sultan  Selim III (1789-1807).

In style, the mosque signifies a transition from Ottoman baroque to empire style. Its architect is Krikor Balyan (1764-1831), who is the first in nine architects belonging to the Armenian Balyan family who served the royal family throughout the nineteenth century. The mosque was named Nusretiye or Victory, in celebration of the sultan's recent abolition of the rebellious janissary troops in favor of a new western-style army - an event known in Ottoman history as Vaka-i Hayriye or the auspicious event.

When it was built, the Nusretiye mosque stood to the northeast of a rectangular parade ground facing the Bosphorus with the Meclis-i Mebusan or Parliament Street at its back. The artillery barracks, built by Sultan Mahmud II at the same time as the mosque, bound the southwest side of the parade ground. His successor, Sultan Abdülmecid I (1839-1861), added a clock tower (Tophane saat kulesi) at the center of the grounds and built the royal Tophane kiosk (Tophane Kasri) at the street end of the longitudinal axis.

In 1866, the neo-classical strip housing the offices of the marshals was built on the other side of Meclis-i Mebusan Street from the Tophane kiosk and the fenced parade ground, completing the monumental appearance of the military complex seen in older photographs. Only the mosque, the clock tower and the Tophane kiosk have survived the mid 1950s urban renewal and highway construction programs.

The parade ground was developed into a trade entrepôt with concrete warehouses extending into newly infilled grounds behind the mosque. The mosque stands today on Necati Bey Street, having lost its historical context and connection with the water. It was restored between 1955 and 1958, and again in 1980 and 1992.

The mosque stands raised on a tall basement, oriented along the northwest-southeast axis. It consists of a square prayer hall with narthex and mihrab apse, and a large sultan's kiosk, which wraps the west and north corners at the front, on either side of the tall portico. Side arcades made of five domed bays flank the prayer hall on the exterior. Although the mosque lacks a monumental courtyard, a prominent feature in classical Ottoman mosques, it has a small side courtyard that adjoins the prayer hall to the northeast.

The side arcade on this side is a few steps below the courtyard whereas to the southwest the arcade has two-stories and has a door at the lower colonnade that leads down to the basement level. The mosque portal is located at the center of the three-bay portico, a monumental baroque entrance with two staircases leading up to its terrace. The staircases are framed on either side by the projecting bays of the sultan's kiosk, which is raised to the height of the portico domes carried on arches and columns, forming open terraces below.

The residential-looking sultan's kiosk dominates the front façade of the mosque and zigzags around the corners where the minarets are attached to form wings projecting outwards into the parade ground and the side courtyard. It is entered primarily from a baroque portal adjoining the side arcade on the southwest façade; there are secondary entrances on either side of the portico.

Inside, the prayer hall is crowned with a single dome, raised on four grand arches that spring from the four corners. The narthex to the northwest has women's prayer section flanking the entrance and the muezzin's platform at the gallery level. The grand arch above the narthex is carried on two piers and three arches, the larger central arch mirrors the arch of the mihrab semi-dome across the hall.

Along the southwest wall, to the right, is the sultan's lodge - a balcony with gilt screens entered from the sultan's kiosk. Windows pierced into the tympana of the grand arches and twenty windows around the dome illuminate the interior from above. Of the two tiers of windows at the ground level, the lower casements are crowned with baroque vases carved in the marble tympana of the window arches.

All of the upper windows have faux frames painted in the baroque style. The mihrab and minbar are carved of white marble and decorated with flowers and gilt garlands. Perhaps the most important decorative element on the interior is a calligraphic band inscribed with the Koranic sura of The Event or Al-Naba, which travels the interior located above the casement windows. It is written in gold celi style letters over a dark background by the famous calligrapher Mustafa Rakım (1757-1826).

There is obtrusive structure on both sides of the entrance of the mosque called the Hünkar Kasrı (royal residence). It is situated on marble columns with a round arch. It also has an entrance from its rooms to the last prayer section of the mosque and to the outer side porch. The Sultan's entrance is located on the southern facade with a view of the sea. Crowning the aesthetics of the building are the walls of the royal residence which are decorated with a colourful plant motif  as well as with calligraphy on its arched-door.

One enters into the harim (sanctum sanctorum) of the Nusretiye Mosque through a palatial baroque style door measuring 4 x 2.10 m. The harim is built on a square plan measuring 7.50 x 7.50 m and has a ceiling of 33 m covered with a pendant dome. There are windows decorated with calligraphy built into the tympana of the grand arches as well as twenty windows around the dome which illuminate the interior from above. The niche of the mihrab is plain when compared to the other elements of the mosque.

There are two windows on both sides of the niche of the mihrab, and the mihrab is covered with a half dome which, when viewed from the inside of the mosque, appears as a circle. Additionally, the Nusretiye Mosque showcases the last example of classical Ottoman window arrangement and architecture with its facade including four levels of window rows and marble wall panels ascending to the same level as the window gaps of the second row.

The mosque has two minarets located at the west and east corners. Raised on tall square foundations, the fluted minaret shafts have bulbous bases and double balconies with wavy balustrades. In order to create a view for passing ships to read the string of lights with devotional messages (mahya) hung between the two minarets without being obstructed by the dome, the minarets were taken down and rebuilt taller in 1826.

The Nusretiye Mosque, both with the site on which it was built and its architectural details, showcases an example of mosque architecture definitely worth seeing. To the northeast, the entrance to the small side courtyard is flanked by twin structures of the sabil (sebil), on the right, and the room of the timekeeper (muvakkithane), on the left.

The superstructure, including the dome, is marked with exuberant architectural decorations. Curved pilasters with finials alternate with the dome windows and large bulbous weight turrets with pointed domes that are placed at the springing of the grand arches, which are bordered with lace-like cornices. The mosque is constructed primarily of cut stone.

Positioned originally across the street, they were moved adjacent to the mosque during the rule of Sultan Abdülaziz I (1861-1879). They are round with arched grille windows facing the street and are crowned by conical domes with wavy eaves mirrored by wavy marble cornices with inscriptive plaques. A fountain kiosk erected beside the mosque by Sultan Abdülhamid II in 1901 has been moved to Maçka neighborhood as part of the urban renewal program.

These scripts and photographs are registered under © Copyright 2018, respected writers and photographers from the internet. All Rights Reserved.
Posted by ISTANBUL, Extended On Two Continents at 11:29 AM