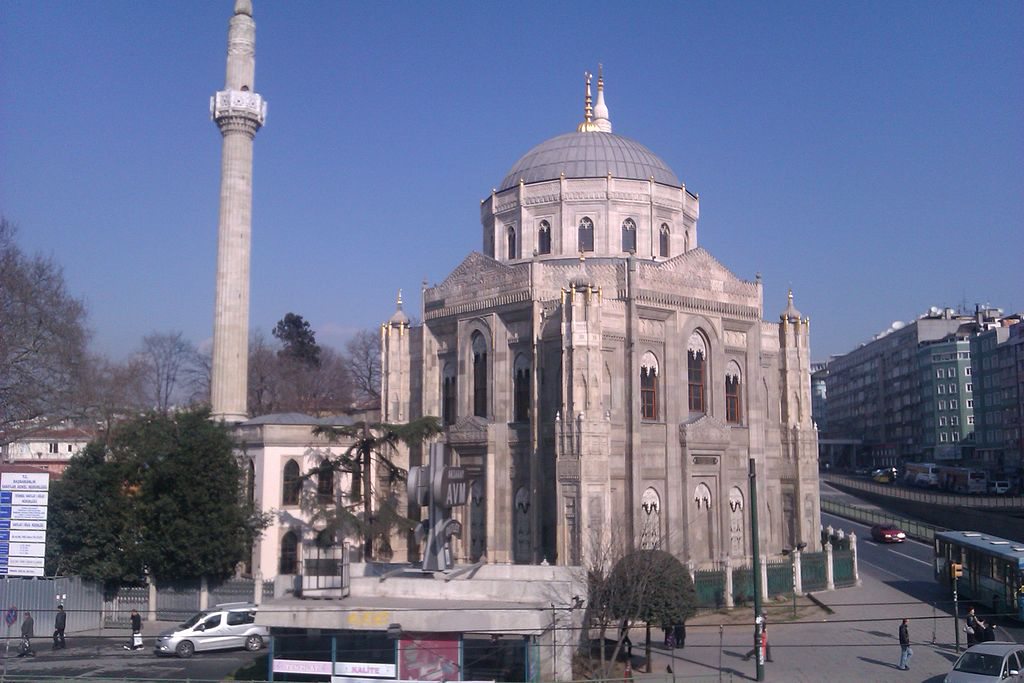 One of the last mosques built in Istanbul during the Ottoman Empire, the Pertevniyal Valide Sultan Mosque was built for the Sultana Pertevniyal, wife of Sultan Mahmud II and mother of Sultan Abdülaziz. It was designed by the Italian architect Montani. The construction work began in November 1869, and the mosque was finished in 1871.

The complex, which comprises several buildings around a central mosque (külliye), was commissioned by Pertevniyal Valide Sultan and consists of a mosque, a tomb, a sabil, a public fountain, a clock-room where timepieces for calculating prayer times accurately on a daily basis were kept, a library, and a theological school (madrasa). The mosque is a single-domed, square prayer hall, following the traditional plan. In front of its strongly vertical mass is an additional two-storey building that comprises the portico for latecomers, men's and women's areas, the sultan's loge and various rooms.

Attached to this additional building, separate from the main body of the mosque, are two minarets, each with a single balcony. The square prayer hall measures 10 m x 10 m and is extended with arches on four sides. The mosque's east, west and south façades are all emphasised with turrets and the outward projections of their central sections are each crowned with a triangular pediment. Each section has two rows of three windows. The dome, separated from the walls and brought inward, is supported on a high, 12-sided drum.

The Valide Mosque is located on the north-west side of Aksaray Square in Fatih. The Valide Mosque stands at the very beginning of the Atatürk Boulevard, at the crossroads of the Aksaray Square. It was built at the behest of Sultan Abdülaziz's (1861-1876) mother, Pertevniyal Valide Sultan, between 1869-1871 and was designed by the architect, Sarkis Balyan. It is also known that Agop Balyan made a contribution to the project. It is claimed by some sources that the architecture of the mosque was Montani, an Italian architect.

There had previously stood a mosque named Hacı Mustafa Ağa located on the former site of the Valide Mosque. The present-day Valide Mosque was built on the ruins of that mosque. It was mainly designed as a complex which including a muvakkithane (a time keeping room), a fountain, a tomb and Sıbyan Mektebi (an Ottoman elementary-primary school). The mosque is composed of two sections: the last prayer section and the Harim (sanctum sanctorum). The size of the Harim is 10 x 10 m, and the ceiling structure is composed of a dome.

The Pertevniyal Valide Sultan Mosque is noteworthy for the density and variety of its decoration. The projecting central sections of the façades and the windows on the drum of the dome are executed in the Gothic style. The design of triple blind niches above the windows, for instance, borrow elements from Ottoman decorative art, while their location recalls examples from North African and Andalusian architecture.

The blind niches, as well as the decorative compositions of arabesques and palmettes on the façades, are, like the muqarnas, elements borrowed from Classical Ottoman art. The corner turrets, each of which terminates in a lobed onion-dome reminiscent of Indian architecture, are decorated with niches containing muqarnas, again borrowed from Classical Ottoman architecture, as well as the simple blind niches and various geometric motifs.

The Neo-Gothic style of the Valide Mosque differentiates it architecturally from the more classic mosques. The single dome is quite high, but small. The mosque's main body and front are different from any other mosques built up to that period. The neo-gothic embellishments, in particular, reinforce the mosque's unique beauty. The interior of the mosque also boasts an array of rich and beautiful embellishments. The interior is fully decorated with-blue inscriptions and engravings shining with gold gilding. The mosque has two minarets and a single gallery.

Among the historical mosques of Istanbul, its ornaments and decorations have been more extensively used than others. The western impact on the architectural design during the period, combined with 16th-17th century decoration techniques, have been blended together in the mosque. Additionally, the decorations still shine with a gleaming, blue color, and its engraved ornaments have become prominent elements within the architectural aesthetic. Both the inner and outer sides of the mosque’s walls are marble panels decorated with motifs and calligraphies depicting selected verses from the Qur’an.

The interior space, like the façades, is densely decorated. Ottoman motifs are used in painted decoration (kalemişi) in which blue dominates. A cornice with muqarnas surrounds the upper section of the lower row of windows. On the surfaces of the walls, as on the façades, classical Ottoman elements are found including blind niches, muqarnas, arch motifs, arabesques, and Chinese-inspired floral ornament. The marble mihrab and minbar are plain.

The door of the courtyard, which looks out onto Aksaray Square, is strikingly different from other mosques of İstanbul  The door frame is one of the rare and unique examples of the art of stone engraving. The stone workmanship on the court door opening toward the Aksaray Square is the pinnacle of success of Ottoman stone workmanship.

The mosque is actually part of a complex made up of a school, tomb, clock room and public fountain. During the reorganization of Aksaray Square in 1956-1959 the other parts of the complex were either destroyed or, as in the case of the public fountain, moved elsewhere. Due to the renovation of the underpass and of the upper roads as well as to the increasing of the overall height of the road, the mosque appears to be burried underground today.

Wood Carving And Inlays
The ancient Turkish art of wood carving makes use of a variety of different design techniques on traditional forms such as columns, doors, window covers, chests, stools, and Quran covers. By the seventeenth century, inlays of ivory, bone, mother-of-pearl and other semi-precious stones were applied as inlays for carved wood pieces.

Perhaps the most ubiquitous use of mother-of-pearl inlays in Turkey are to be found in palace furniture and architecture. The most magnificent sites for such incomparable work are the Topkapı Palace, the Mihrimah Sultan Mosque, the Tomb of Murad III, the Beylerbeyi Palace and the Blue Mosque.

Stone Carving
Frequently used on the walls of buildings, mosques, minarets, gates, columns, pools and tombstones as a decorative feature, stone carvings added strenght and durability to structures in addition to its aesthetic function. Although almost all kinds of stones were used for carving and art work, marble and sandstone traditionally have been the most frequently used stone for this purpose.

These scripts and photographs are registered under © Copyright 2018, respected writers and photographers from the internet. All Rights Reserved.
Posted by ISTANBUL, Extended On Two Continents at 11:07 AM