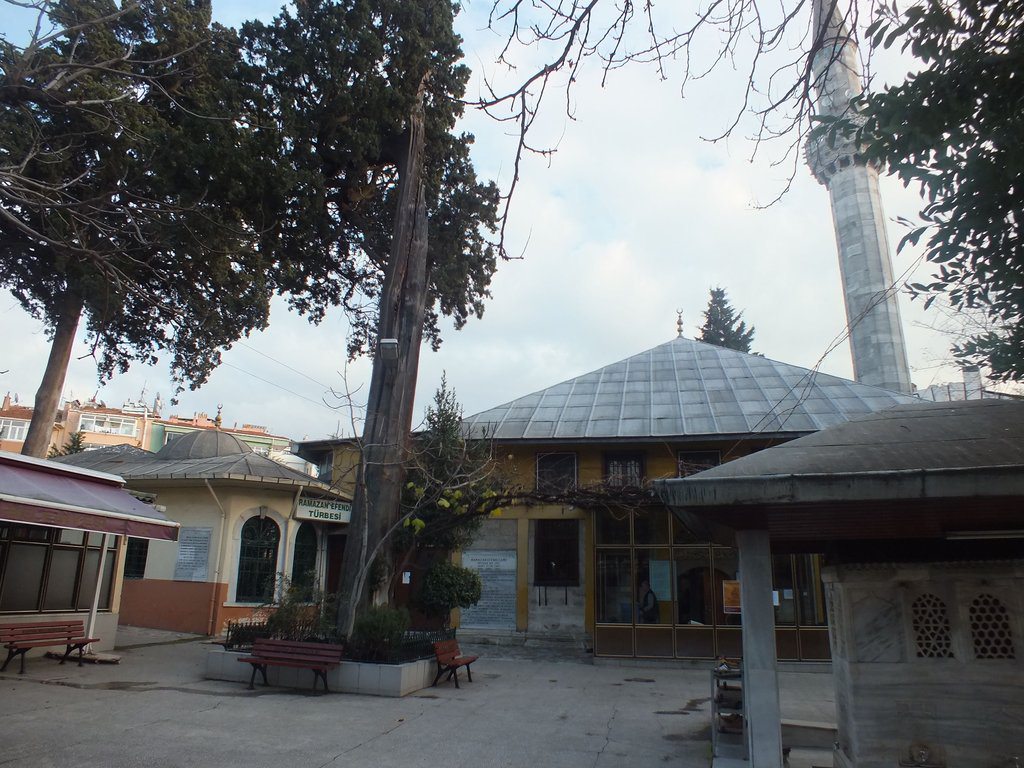 Continuing along the avenue, we take the second right onto Ramazan Efendi Caddesi, where a short way along on the right we come to a small but charming mosque with a pretty garden courtyard in front. The official name of the mosque is Hoca Hüsrev Camii, for the court official who originally founded it. It is also publicly referred to by the following names: Bezirganbaşı Mosque, Ramazan Efendi Mosque, or Koca Hüsrev Mosque.

It is more usually called Ramazan Efendi Camii, after the first şeyh of the dervish tekke which was part of the original foundation. The building is by Sinan at the age of 96, and a long inscription over the inner door by his friend the poet Mustafa Sa’i, gives the date as A.H. 994 (A.D. 1586); thus, this is undoubtedly the last mosque built by the great architect, completed in his 97th year.

It is a building of the simplest type: a small rectangular room with a wooden roof and porch. It is thought that it was originally covered with a wooden dome and that it had a porch with three domed bays supported by four marble columns; the present wooden porch and flat wooden ceiling are botched restorations after an earthquake.

The minaret is an elegant structure both in proportion and in detail, while the small şadırvan in the courtyard is exquisitely carved. But the great fame of the mosque comes from the magnificent panels of faience with which it is adorned. These are from the Iznik kilns at the height of their artistic production and are thus some of the finest tiles in existence: the borders of “tomato-red” are especially celebrated.

The appearance of its plain exterioris in contrast to the superb İznik tile decoration of the interior. However, don’t let the beauty of these tiles make you forget to get a closer look at the fine carvings on the marble minber, which is one of the most superb example sof the period.

The mosque is a typical example of the 16th century classical style Ottoman Architecture and is well known with its Iznik tiles at the interior. The single dome of the mosque is recessed in a flat wooden ceiling. Especially its minaret display all the characteristic features of the classical period.

The most fascinating feature of this modestly sized mosque is its 16th century tiles covering almost the entire interior. Only the small minaret, with its beautiful proportions, reflects the original composition of the exterior façade which has been restored several times.

Maintenance of the mosque was in different time periods. Dede Efendi gave financial support to its maintenance. An addition to the entrance door was constructed of recent date. The building was restored in the 19th century with the support of Hamamizade İsmail Dede Efendi, a well-known composer. Only the small minaret, with its beautiful proportions, reflects the original composition of the exterior façade which has been restored several times.

These scripts and photographs are registered under © Copyright 2018, respected writers and photographers from the internet. All Rights Reserved.
Posted by ISTANBUL, Extended On Two Continents at 11:15 AM