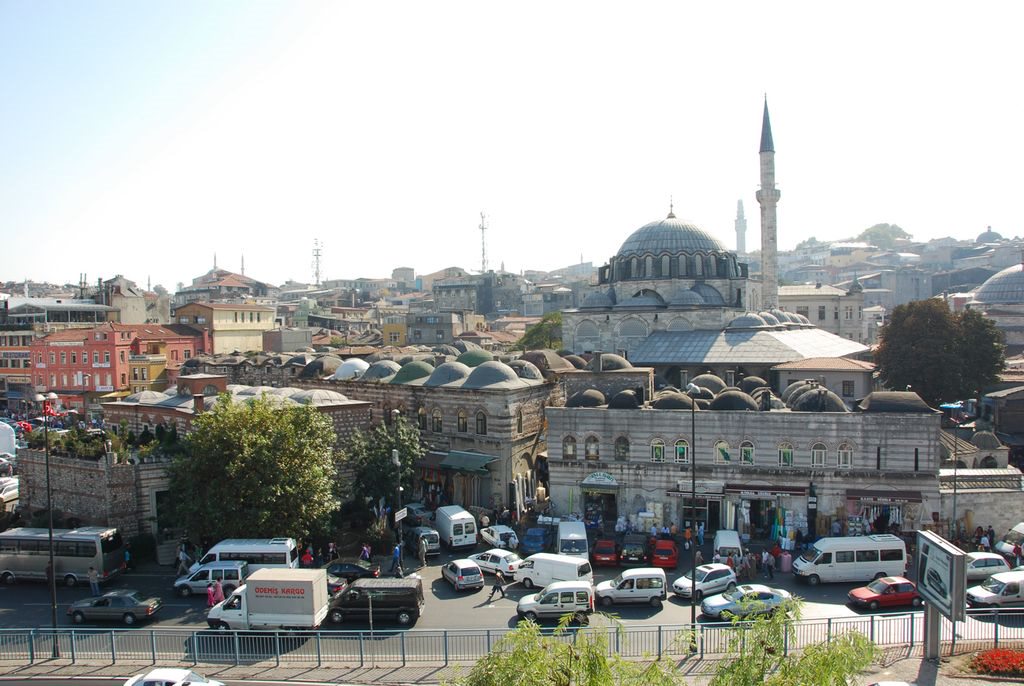 The Rüstem Pasha Mosque is an Ottoman mosque located in Hasırcılar Çarşısı (Strawmat Weavers Market), Uzunçarşı Caddesi, Tahtakale in Eminönü, Istanbul. Located on the Eminönü Square, the mosque is easily accessible from any location. At Eminönü, keeping the Süleymaniye Mosque and Complex in view, this mosque will be to your right.

It is one of the most important structures making up Istanbul 's skyline. Situated on a high platform with a commanding view of the city, the mosque was built on the former site of Hacı Halil Mescid. The location of the mosque is one of the busiest in the city and has been since Roman times. Prime Minister Rüstem Paşa, one of the leading state officials and proponents of construction, also had a role in the building of Süleymaniye Camii. He was the husband of Süleyman, the Magnificent's daughter, Hürrem Sultan and was known for the buildings he had constructed throughout the Empire.

To the west of the mosque is a cemetery, and a square was later added behind its qibla wall. As indicated by a four-line inscription, the mosque was commissioned by the Grand Vizier Rüstem Pasa, son-in-law of Suleyman the Magnificent, and was built by Mimar Sinan in 1561. However, scholars claim that, considering the Grand Vizier Rüstem Pasa's death date, it is probable that the mosque was ordered by his widow in his memory and completed later.

It was constructed in the place of a Byzantine church converted into a mosque in the fifteenth century by Haci Halil Aga. The mosque constitutes the third in a series of edifices designed by Sinan at the request of the Grand Vizier, following the Rüstem Pasha Madrasa in 1550 and the Rüstem Pasha Mosque in Tekirdag in 1553.

This is one of Sinan’s best known works, due to the Iznik tiles, unparalleled in magnificence, that cover the whole interior space as well as its structural design features. The richness and variety of the tiles recreate a 16th century tile museum with a glowing effect in all colors. The transition Sinan was able to achieve between the congested and chaotic streets of Tahtakale and the contrasting light quality in this interior space, decorated with tiles, is an extraordinary architectural experience.

The mosque has been repaired several times after earthquake damage through centuries, and as a result, the roof structure is no longer original. However, the mosque’s architectural design in an urban setting, with its tiles and its masonry details, reveals the luminous 16th century ambience to the beholder.

This is the mosque with a central dome and a single minaret that arises amidst the rows of shops and storehouses near the Spice Bazaar. It creates a beautiful sight in the busiest commercial center in the city, together with the Süleymaniye Mosque on the slope behind. The architect Sinan built the mosque in 1561 for the Grand Vizier Rüstem Paşa. Spiraling staircases go up to the structure that is set above a row of shops. The interesting courtyard is actually a small terrace covered by five small domes.

The central dome rises atop four wall pillars and four columns, two on each side. Over the corners of the square space are four semidomes supporting the main dome. There are galleries behind the columns on the sides. The facade and the small, but attractive interior are decorated with the finest examples of Iznik tiles. The geometrical and leaf and flower motifs on the tiles give the interior a colorful flower garden appearance. The embossed coral-red color was used only for a short time in the 16th century.

The central main dome is supported by four half-domes. The base of the dome contains 74 windows, and its arches are supported by octagonal elephant feet. The mosque niche and pulpit are made of marble. The area designated for late-arriving worshippers has six pillars and five domes. The minaret, with its single gallery, replaces the original, which was torn down.

It was designed by Mimar Sinan "Sinan the Architect" for Grand Vizier Rüstem Pasha (who married one of the daughters of Süleyman the Magnificent, Princess Mihrimah). Its building took place from 1561 to 1563. The mosque was completed by Hürrem Sultan after the death of her husband, Prime Minister Rüstem Paşa. The mosque was damaged in the Great Fire of 1660 and the earthquake of 1776 in both instances, the damage was immediately repaired.

Nineteenth-century Baroque frescoes, layered over the surfaces of the four semi-domes on the sides of the octaglon, were removed during a 1960-1961 restoration organized by the religious foundation. The Rüstem Pasa Mosque was most recently restored between 1964-1969, and now functions as a mosque and monument.

The interior of the mosque, and a part of the exterior northwestern elevation of the prayer hall, are clad with colored Iznik tile panels decorated with floral arabesques. Red and white stones form the arches supporting the central dome and the slightly pointed arch that crowns the wooden doorway of the main entrance. The roofs of the side wings are decorated with wooden colored reliefs organized into geometric patterns. Floral frescoes decorate the center of each dome, while Thuluth inscription plaques are placed above the doorways, and medallions with Arabic inscriptions are situated between the arches of the external portico and on the squinches.

The mosque is famous for its exquisite Iznik tiles, set in beautiful floral and geometric designs, which cover not only the facade of the porch but also the mihrab, minbar, walls, and columns. The plan of the mosque consists of an octagon inscribed in a rectangle. The dome rests on four semi-domes; not on the axes but in the diagonals of the building. The arches of the dome spring from four octagonal pillars - two on the north, two on the south - and from piers projecting from the east and west walls. To the north and south are galleries supported by pillars and by small marble columns between them.

A portion of these valuable tiles have been stolen. The interior of the mosque, apart from the dome, is covered with coloured İznik tiles which are the best examples from a technical and design perspective. All the classic motifs can be found on the tiles, including fruit and flower forms. Other than dazzling tiles, the coloured porphyry marble is worth seeing.

Oriented along the north-east axis, the mosque is elevated on the plateau of a vaulted substructure containing the marketplace. It consists of an octagonal basic structure inscribed into a rectangular prayer hall flanked by two wings. The mosque is covered with a central dome elevated to a cylindrical drum, while a five-dome portico adjacent to the northeastern elevation is adjoined by a second exterior portico with a pitched roof.

A cylindrical minaret emerges from the western corner of the prayer hall. Four staircases, enclosed in an equal number of vestibules, offer access to the elevated plateau of the mosque. Two of them adjoin the northwestern part of the substructure's northeastern and the southwestern sides and the rest are incorporated within the southeastern corners of the marketplace. The main entrance to the mosque is located in the center of the northeastern elevation of the mosque.

The marketplace consists of a cross-vaulted warehouse occupying the ground floor of the main edifice of the mosque. Two slender barrel-vaulted stores correspond to the upper floor's double porticos, and a series of vaulted shops align to the northwest of the two stores, with a fountain in the center. The Rüstem Pasa Mosque rises on the terrace of the substructure, thus constituting the second storey of the complex.

A pitched-roof wooden portico with slightly pointed arches partially occupies the northeastern and the southwestern elevations of the mosque and adjoins the northwestern side of the five-dome portico with arches supported by columns with muqarnas capitals. Accessed by a main entrance placed on the middle of the northwestern façade of the portico, the prayer hall is covered by a central dome flanked by double-height wings, which are cloister-vaulted on the northeast and barrel-vaulted on the southwest.

The dimensions of the prayer hall are approximately 26.8 by 19.6 meters, with the qibla wall along the longer side. The central dome, with a diameter of 15.2 meters and a height of approximately 22.8 meters, is raised on a cylindrical drum on an octagonal base. This base is supported by eight octagonal pillars placed on the corners of the octagon; four of them partially buried inside the walls, and four of them are free-standing, tied by semi-circular arches.

Squinches intervene between the cylindrical drum and the octagonal base, transferring the load to the pillars through muqarnas pendetives. Four semi-domes are placed on the diagonals of the prayer hall. The mihrab is covered with a muqarnas semi-dome. The base of the minaret is embedded in the western corner of the prayer hall. The interior is lit by twenty-four apertures on the drum of the central dome, along with two series of rectangular openings on the walls of the first and second floor and the grille-covered openings located within the tympanums of the main arches.

These scripts and photographs are registered under © Copyright 2018, respected writers and photographers from the internet. All Rights Reserved.
Posted by ISTANBUL, Extended On Two Continents at 10:25 AM