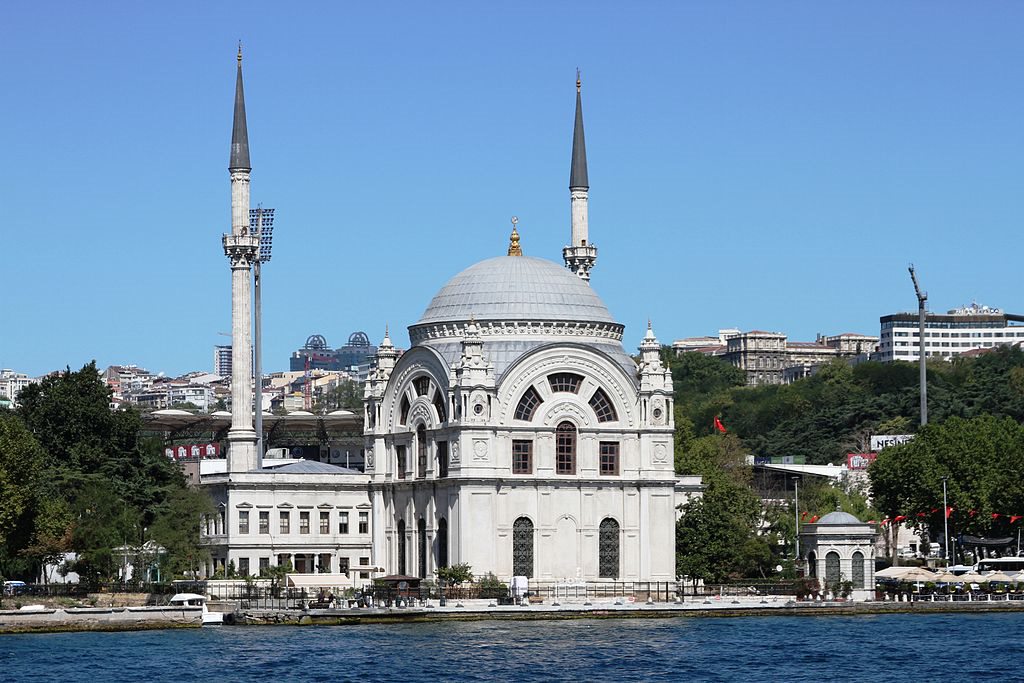 Dolmabahce Mosque was built along with the Dolmabahçe Palace in neo-classical and imperial style and located in the south of Dolmabahçe Palace. These types of mosques are quite rich in decorations and ornaments of Rococo and Baracoa style. Dolmabahçe Mosque architecture is very different from the classical Ottoman mosque. It resembles a highly decorated palace hall more than a holy place since it was designed as a part of the Dolmabahçe Palace.

Dolmabahçe Mosque’s original construction was initiated by Bezm-i Alem Valide Sultan, the mother of Sultan Abdülmecid (1823-1861). Upon her death, it’s construction was continued by her son. The mosque was opened for prayer services on March 23rd, 1855. Its architect is Garabet Balyan, a member of the Balyan family who built various structures for the Ottoman Empire.

The Dolmabahçe Mosque is adorned with various items of both Baroque and Ampir styles, which are reflected in the architectural design of that period. Also, an emergent architectural modernity in the mosque is its circular window design. Such a design had rarely been seen in mosques and civil architecture before this time.

Dolmabahçe Mosque has two minarets just with a single balcony and a single dome resting on a square floor. The interior part has a decoration having a mixture of ampere and baroque styles. Precious chandelier hangs from the dome. Mimbar (pulpit) and Mihrab (niche) is made of red porphyry and decorated with European patterns. The light from the large windows contributes to the beauty of the colorful marble interior decoration.

Also, the muvakkithane (time keeping room) was carried to the seaside.

The mosque has an obvious geometric structure with its 25 x 25 meter base and rectangular shaped two-storey royalty section. It is one of the latest examples of the ampir (empire) style of the mid-19th century. The interior has a decoration having a mixture of baroque and ampere styles. From the dome hangs a precious chandelier. Mihrab and mimbar is made of red porphyry.

It was the part of the palace complex so it contains a front section in which the state officials and sovereign could worship and a two-storey section for the sovereign suitable for the public procession of the Sultan to the mosque on Fridays.

Dolmabahçe Mosque is one of the ornamented mosques constructed in Baroque style. Since the mosque is adjacent to the palace, a two storey Sultan maksoorah was constructed on the front part where the Sultan and statesmen can perform their prayers and where public processions and meetings could be accommodated. Circular window design which is rarely seen in our mosque architecture gives the building a different look with its peacock-tail design.

These scripts and photographs are registered under © Copyright 2018, respected writers and photographers from the internet. All Rights Reserved.
Posted by ISTANBUL, Extended On Two Continents at 9:13 AM