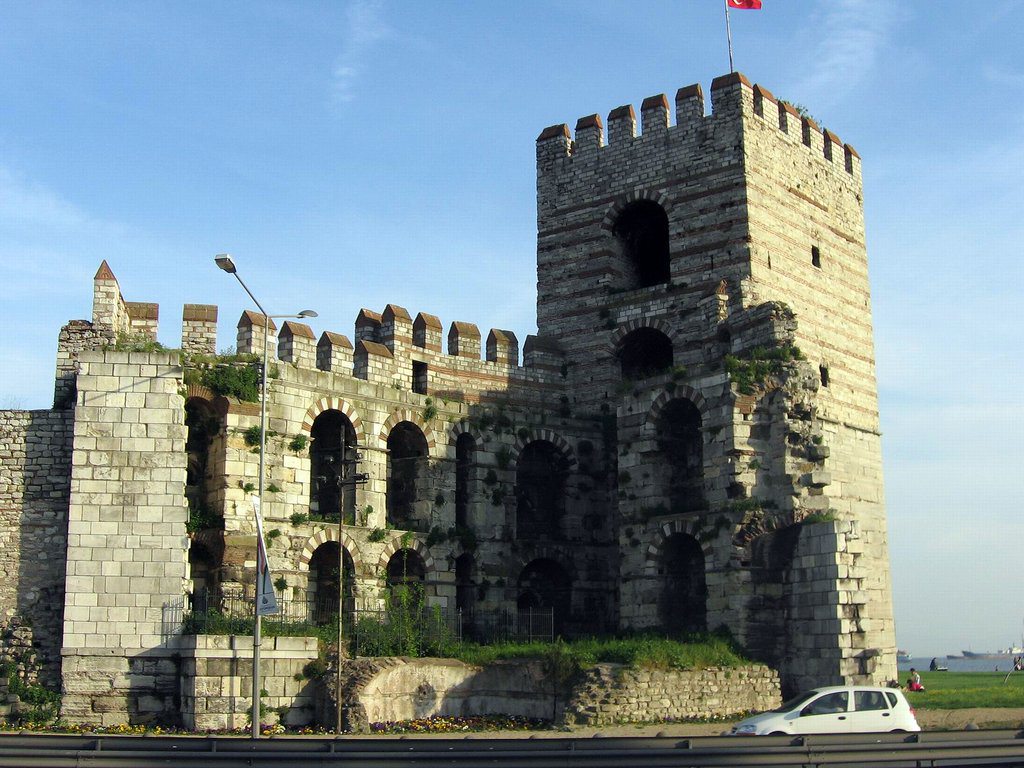 Here the sea-walls along the Marmara joined the land-walls, anchored to them by the Marble Tower, the handsome structure which we see standing on a little promontory by the sea. This tower, 13 metres square at its base and 30 metres high, its lower half faced in marble, is unlike any other structure in the whole defence-system, and may have been part of an imperial sea-pavilion. Indeed the ruins beside it seem to indicate that it was part of a small castle. Beyond the tower there are the sunken remains of a mole which must have been part of the castle harbour.

A short way in from the shore highway, immediately to the north of the first tower of the inner wall, we see one of the ancient gateways of the city. This is called the Gate of Christ because of the laureate monogram XP above it. In the long stretch of the Theodosian walls there were only ten gates and a few small posterns. Five of the ten gates were public entryways and five were used by the military, such as the one which we see here (it was sometimes called the First Military Gate).

The distinction was not so much in their structure as in the fact that while the public gates had bridges over the moat leading to the country beyond, the military gates did not, but gave access only to the fortifications. Until the end of the last century Stamboul was still a walled town and these gates were the only entryways to the city from Thrace, but in recent times the walls have been breached to permit the passage of the railway and of several modern highways. Nevertheless, nearly all the ancient city gates continue in use, as they have now for more than 15 centuries.

The first stretch of the Theodosian walls is rather difficult to inspect because of the obstacles presented by the railway and the various industries that are located here. But the stroll here is more pleasant than it was in times past, because in recent years the authorities have removed the noxious tannery that reeked here since early Ottoman times.

As Evliya describes this malodorous tannery as it smelt in his time: “The overpowering reek prevents people of quality from taking up their abode here, but the residents are so used to the stench, that should they happen to meet any musk-perfumed dandy, the scent quite upsets them.”

These scripts and photographs are registered under © Copyright 2017, respected writers and photographers from the internet. All Rights Reserved.
Posted by ISTANBUL, Extended On Two Continents at 1:53 PM