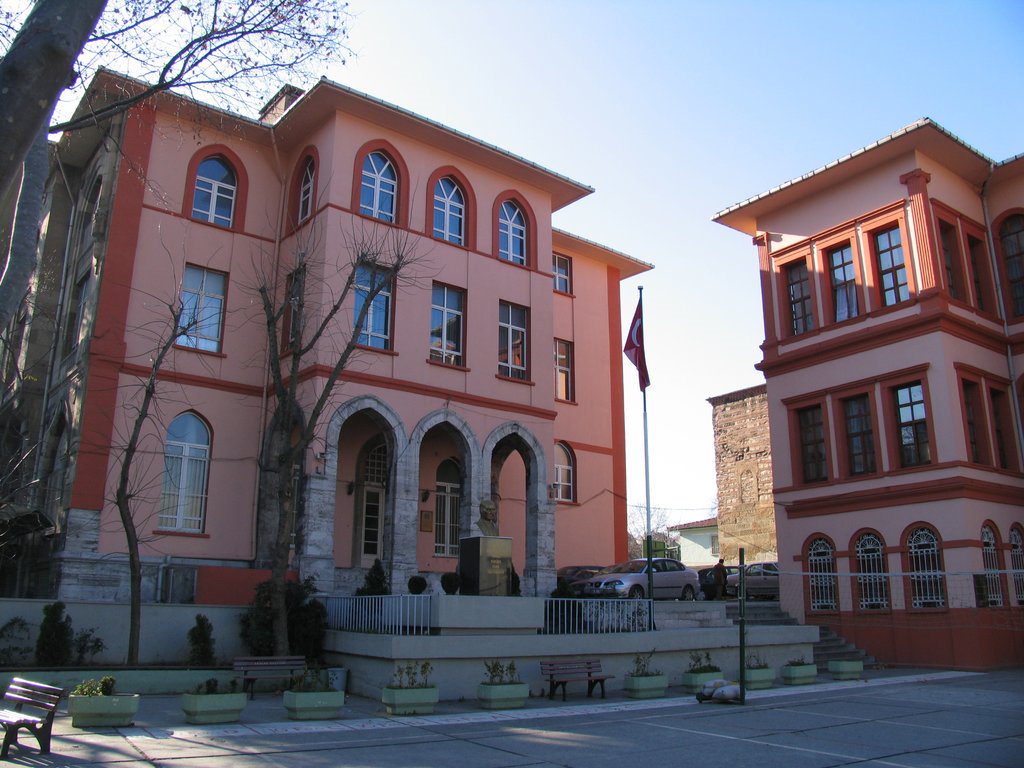 Vefa Anatolian High School, is one of the oldest and internationally renowned high school of Turkey. The first mülkiye lisesi (non-military high school) training in Turkish language was Vefa Lisesi (established in 1872) which forming and specializing as İdadi lessons and classes in Mekteb-i Mülkiye. Vefa S.K. was formed in this institution with initial players all being members of the school. It is located in Vefa at Fatih, Istanbul.

The school buildings consist of one boarding-house, the two other being training-educational buildings. Further exist in the schoolyard the Şehzade Mehmet Tabhane-Building (Printing House Building) and the Şehit Ali Paşa Library, which belong to the General Directorate of Foundations. These buildings are dedicated to the training-education services of the school and the Vefa High School Education Foundation carries out the restoration / repair works.

Though tabhanes were often directly attached to mosques later in Ottoman period, the tabhane at the Şehzade complex is a freestanding structure located to the east of the madrasa and north of the mosque, mausolea, and gardens. The tabhane is composed of a series of domed chambers designed to house pious travelers during short visits to the mosque. The tabhane is subdivided into three sections; the western and central sections are identical, while the larger eastern section features a unique interior organization and an adjacent trapezoidal courtyard.

The enclosed portion of the eastern section is composed of two aisles of domed bays, each four rows deep. The sections to the west are each subdivided into thirds, with two small domed chambers to both the east and west of a larger central domed space. The tabhane measures between sixty-two and sixty-seven meters wide east to west and between thirteen and twenty-four meters long north to south. It is used Chemistry Laboratory since 1950 of Vefa Anatolian High School.

The first mülkiye lisesi (non-military high school) training in Turkish language was Vefa Lisesi (1872) which forming and specializing as İdadi lessons and classes in Mekteb-i Mülkiye. All of the classes of İdadi sections in the academic faculties (Mekteb-i Mülkiye, Mekteb-i Tıbbiye, Mekteb-i Hukuk) were become together as an independent high school, named as Dersaadet İdadi-i Mülk-i Şahanesi, in 1886.

The high school was moved to Vefa when the building (now called Orta Bina that was built by Sadrazam Mütercim Rüştü Pasha) was bought by the Ministry of Education from Gazi Ahmet Muhtar Pasha, in 1884.

Because of the new local in the district of Vefa, Vefa İdadi-i Mülki-i Şahanesi was given as a new name of the school in 1900. The school was set on the status of sultani by name of Vefa Mekteb-i Sultanisi in the educating year of 1913-1914. In that season, the school became a permanent education institution in consist of primary, secondary, and high (all 12-year) classes. After the ratification of Tevhid-i Tedrisat Kanunu in 1924, all idadis and sultanis were called as Lise, so the new placard of the school was Vefa Erkek Lisesi.

Then the school, just like some of high schools, was limited to secondary school service; and at the same time it was moved to the building of Pharmacy School in Kadırga. The secondary school served by name of Vefa Orta Mektebi for eight years over there. In 1933, the school retransferred to its old location-historical building, and so it regained its previous post of Lise in Vefa, entitled as Vefa Erkek Lisesi. The school contained both secondary and high classes till 1990, the year of transformation as Anatolian High School.

Middle building
In the Mütercim Rüştü Paşa Mansion of the school, which is called the Middle Building, there are : 8 classrooms, Musical teaching room, Cine-vision hall (has a capacity of 70 people), Library (has a capacity of 50 people), 1 room for vice-director, Guiding service (counselling commission), A room for The Head of Foreign Languages Department, The course center.

Boarding-house
In the boarding-house, there is a refectory in the basement floor for 250 people, in the 1st floor there are warehouses, in the 2nd and 3rd floors 10 dormitories, 1 television room and rooms for other teaching personal. The boarding-house has a capacity of 90 students.

These scripts and photographs are registered under © Copyright 2018, respected writers and photographers from the internet. All Rights Reserved.
Posted by ISTANBUL, Extended On Two Continents at 1:17 PM