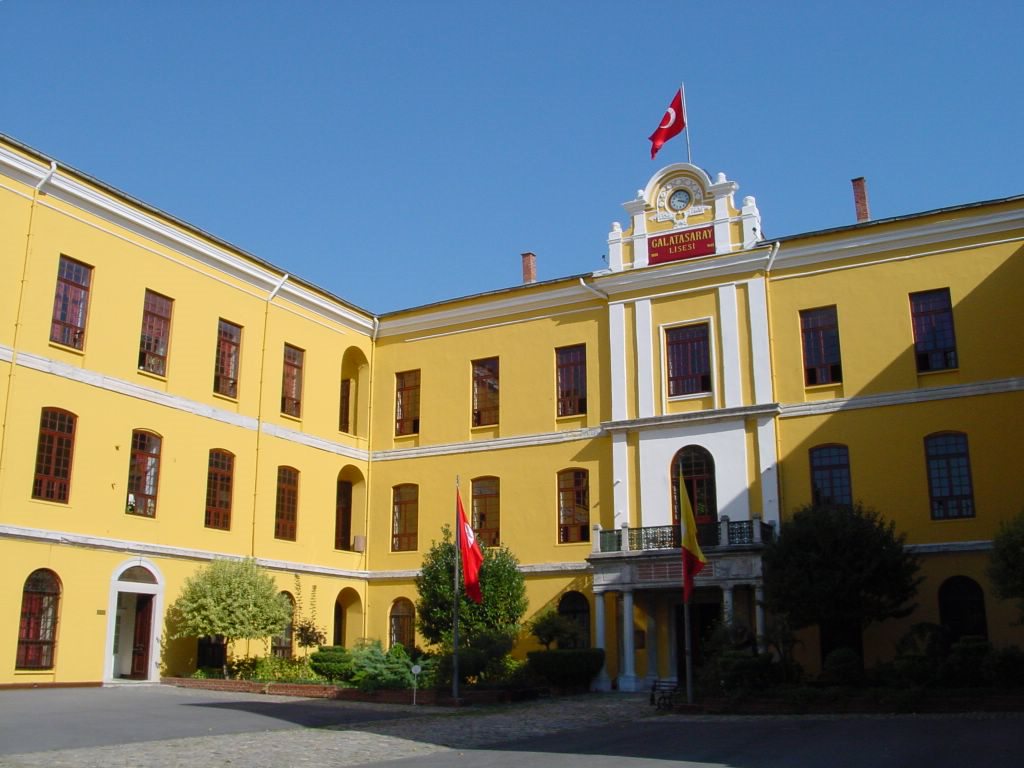 The name Galatasaray means Galata Palace, as the school is located near Galata, the medieval Genoese citadel at the north of the Golden Horn, in the district of Beyoğlu which includes the Galata quarter. The history of Galatasaray High School dates back to 1481. The high school was first built in Beyoğlu and called Galata Sarayı Enderun-u Hümayunu (Galata Palace Imperial School).

Galatasaray High School (Turkish: Galatasaray Lisesi, French: Lycée de Galatasaray) is one of the most influential high schools in modern Turkey. Established in 1481, it is the oldest high school in Turkey and the second-oldest Turkish educational institution after Istanbul University which was established in 1453.

Origins (1481 - 1830)
Sultan Bayezid II (1447 - 1512) founded the Galata Sarayı Enderun-u Hümayunu in 1481. Known as the "peaceful Sultan", he revived the city of Istanbul after the conquest of 1453. Sultan Bayezid II often roamed the city, disguised as an ordinary citizen. Legend has it that on one of these rambles, he found a garden near Galata filled with beautiful red and yellow roses.

In this garden, he met Gül Baba (Father Rose). The Sultan asked the wise man about how to improve the Empire and the city as they filled with a range of immigrants. Gül Baba explained that he was happy with the city, his rose garden and the reign of the Sultan, but he would be much happier if there were a school which would educate all students from this diverse range of backgrounds, as this would train the wise men needed to serve such a large Empire.

He told the Sultan he would be proud to serve as a teacher in this school in order to create a generation of valuable subjects to the Empire. Sultan Bayezid II took Gül Baba at his word and returned to the garden weeks later with the edict which established the Ottoman Imperial School, on the grounds next to the rose garden, with Gül Baba as its headmaster. Gül Baba became the first headmaster of Galatasaray and administered the school for many years. He died during the Ottoman raid to Hungary and his tomb is located near Budapest.

Interim period (1830 - 1868)
Galata Palace Imperial School remained open until the 1830s, when the movement of reform and reorganization abolished the Ottoman Empire's old establishment. Sultan Mahmud II (1808 - 1839) replaced the Imperial School with the Ottoman Medical School, staffed largely by French professors with most courses taught in French. The Medical School was based at the Galata Palace buildings for some thirty years.

Modern period (1868 - 1923)
Sultan Abdülaziz (1861 - 1876) was the first Ottoman sultan to travel to Europe. Invited by Napoleon III, in June-July 1867 he attended the World Exhibition in Paris. He then visited Queen Victoria in London, Wilhelm I in Prussia and Franz Joseph I in Vienna. Sultan Abdülaziz was impressed by the French educational system during his visit, and on his return to Istanbul he announced the Edict of Public Education which established a free compulsory education system for all children until they became twelve.

In September 1868, influenced by the French Lycée model, a school was established under the name "Lycée Impérial Ottoman de Galata-Sérai" (Galatasaray Mekteb-i Sultanisi). French was the main language of instruction, and many teachers were European. The students included members of all religious and ethnic communities of the Ottoman Empire.

Many students who attended the school during this 55-year period became prominent statesmen, educators, bureaucrats or writers in nation-states that were once a part of the Ottoman Empire. Some even served as the first statesmen in their newly established countries in Greece, Bulgaria and Serbia.

The influence of Galatasaray on modern Turkey has been enormous. As the need for administrators, diplomats, and other leaders with a modern education and capacity to handle Western administrative apparatus became more and more pressing, the graduates of Galatasaray filled these roles in the politics of the Ottoman Empire and then the Republic of Turkey. Lycée de Galatasaray, with its contributions to the Westernization of the "East", came to be considered the "Window to the West".

Since this period, the district where this institution stands has been known as Galatasaray. In 1905, in one of Galatasaray's classrooms (Literature 5B), the Galatasaray Sports Club was founded by Ali Sami Yen and his friends.

Establishment of the Republic of Turkey to Integrated Education System (1923 - 1992)
With the abolition of the Ottoman Empire and the proclamation of the Republic of Turkey in 1923, the name of the school was changed to "Galatasaray Lisesi" (Lycée de Galatasaray). Instruction was conducted in Turkish and French, and the school was composed of an Elementary School (5 years) and a Lycée (7 years) where French Language and Literature, Philosophy, Mathematics, Physics, Chemistry, English, and German were taught selectively in the last four years.

Integrated Education System (1992 - present)
In the 1990s, Galatasaray entered another period of transformation. The signing of the Turkish-French Bilateral Agreement of 1992 led to the foundation of Galatasaray University which essentially grew out of the Lycée. With the addition of a new primary education school, the three units emerged as autonomous components of an integrated education system under the aegis of the University.

Until 1997, the high school, or Lycée de Galatasaray, was an 8-year school. After children had completed the 5-year compulsory primary school course, they then had two years of preparatory, three years of junior high, and three years of senior high school education. In the 2003-2004 academic year Galatasaray became a 5-year senior high school, with the introduction of the 8-year compulsory primary education system in Turkey, including one year prep.

Galatasaray, being a boarding school, has a diverse student body, with boys and girls coming from every part of the country. The current curriculum consists of a blend of Turkish and French curricula, plus a number of additional language courses and elective subjects. Courses on Turkish literature, geography, history, ethics, and art are taught in Turkish, while French Literature, philosophy, sociology, mathematics, and science courses use French as the language of instruction. In addition, English is taught in the primary schools from the sixth grade and up, while Italian and Latin are taught in the high school grades.

The students set up an English Club in 1997, which regularly participates in the Harvard Model United Nations Conferences and European Youth Parliament's International Sessions and other events throughout the year.

The Lycée de Galatasaray diploma is equivalent to the French Baccalaureate, and graduates of Galatasaray are admitted to universities in France without further examinations. Moreover, they have no difficulty in enrolling in the best universities in Turkey and abroad. After obtaining their University degrees, many of these students join the Civil and Diplomatic Services, which befits the Enderun and later Imperial school traditions.

Graduates of this school since 1930 have included two Prime Ministers, eight Foreign Affairs Ministers, and scores of cabinet Ministers and Undersecretaries. Apart from these, the alumni of this institution have become academicians, judges, educators, writers, doctors, architects, engineers, journalists, artists, film directors, poets, and painters, and have entered other professions.

Many Galatasaray alumni have joined the Ministry of Foreign Affairs. They constitute an important body in the Diplomatic Corps, and the number of those who have reached the Ambassadorial rank exceeds one hundred.

Education
Education is primarily in French and Turkish. English and Italian are also taught as second languages. There is also a slight exposure to Ottoman Turkish, Persian, and Arabic through literature and religion classes, as well as Latin and Greek through French classes.

In 2003, an eight-year primary school system (which integrated the previous five years of elementary school and three years of junior high under a single body) was added in. With this new system, the one year prep and four year junior high education were transitioned into the primary school.

These scripts and photographs are registered under © Copyright 2018, respected writers and photographers from the internet. All Rights Reserved.
Posted by ISTANBUL, Extended On Two Continents at 7:53 AM