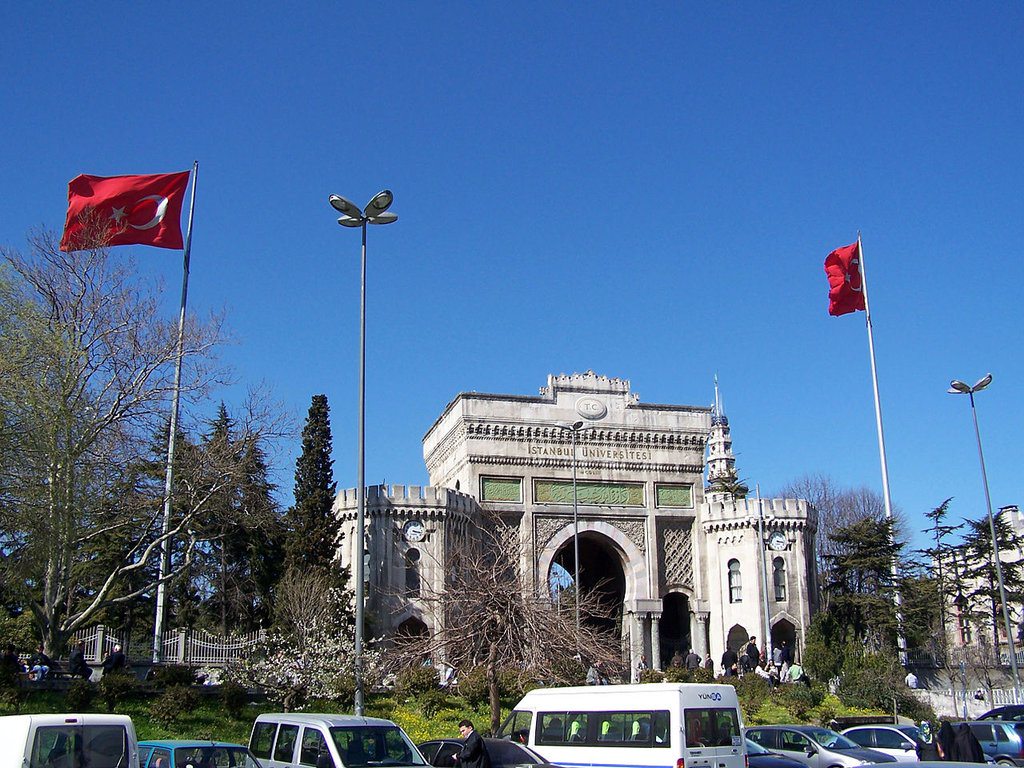 The most famous section of the main campus is the main entrance gate. This monumental door is not only the symbol of the Istanbul University, but also the symbol of “the concept of university” in Turkey. Entering the university also means entering this door with dreams.

Previously, there was a very different building on the current place of this main entrance gate. This initial gate that was constructed in 1827 was very similar to the huge gate of the Sublime Port (Bab-ı Ali) on its Soğukçeşme - Alay Pavillion side. While the Sublime Port (Bab-ı Ali) represented the power of the state in the Ottoman State, the Serasker Gate represented the military force.

The construction of the current gate was started in 1864. In the widening work that was started in Beyazıt Square in 1869, the new Serasker Gate and the pavilions on each side of the gate were used as the main elements of the square. This monumental gate is not only the symbol of the Istanbul University in Turkey but also the symbol of the "concept of university". Actually being a student is in the dreams to enter through this gate.

Today it is the main entrance to one of the oldest universities of the world; Istanbul University was established as a center for theological studies in Ottoman Empire period. Madrasah (School of theological and environmental sciences), was founded immediately after the conquest of Istanbul by Sultan Mehmed II, the conquerer, in 1453. The Madrasah is regarded as the precursor to the "Darülfünun". "Darülfünun" was founded as an institution of higher education on 23 July 1846 and it evolved into Istanbul University in 1923, after the Republic revolution.

The university building is the work of the French architect Bourgeois and there are controversies about the gates architect. Although some say it is the work of the same architect some believe that the plans of  Bekir Pasha, an engineer studying architecture in London were used. The gate is the witness of many student riots and political demonstrations of the Turkish political life.

The gate designed as a triumphal arch con-sists of two towers and an entrance area. It has the  arrangement of an entrance gate confined by low built towers on both sides, and a wide tripartite arch opening in the middle. The middle section of the entrance is designed for vehicles and the side sections are designed for pedestrians. The castle shaped towers are  designed  for guards. On the sections of the towers facing the square, there are two large clocks.

Nizamiye Gate, facing Beyazıt Square, gained a symbolic value with its curvilinear fringes on four sides and its curled, segmented dome. The exterior of the gate : The gate is registered  as "the District of Süleymaniye, Beyazıt Square No:1", and on top of its facade facing the Beyazıt Square, there is a marble stone displaying the letters TC. Below the oval marble stone, the phrase "Istanbul University" is written in bronze letters and the date MCDLIII is written in Roman numerals. Below the date is a tripartite design and a celî-sülüs inscription by Şefik Bey.

In the middle section of the inscription, there is "Daire-i Umur-i Askeriye", on the right is the first verse of Fetih Sura, and on the left is its third verse. This golden foiled inscription on a green background is signed by Şefik Bey. Below the verse on the left, there is the date 1282 (1865-66). The interior of the gate : On the oval medallion on the interior wall of the gate,  there is the emblem of Istanbul University featuring snakes. This emblem was designed by Ord. Prof. Dr. Süheyl Ünver.

Below the emblem is a sentence from Atatürk’s Address to Turkish Youth : "Turkish Youth! Your prime duty is to pre-serve and defend forever the Turkish independence and the Turkish  Republic. You will find the strength you need in your noble blood." - Gazi Mustafa Kemal

The gate having traces of the neoclassically based empire style that began to be used at the beginning of the 19th century was constructed with an orientalist understanding that stands out also in other buildings at Beyazıt Square. Due to the developing relations with Europe and the personal attitude of Sultan Abdülaziz, the orientalist style was frequently used in  İstanbul in the 1860s. The resource of the orientalist style extends back t  Magrip.

Lacy network decorations on wide areas on the front, and segmented, pointed and horseshoe arches resemble the Alhambra Palace. With the modifications made in the 19th century,  Beyazıt Square became an important urban venue representing İstanbul. In the  unfinished project, the monumental gate of Istanbul University is located so as to overlook and rule Beyazıt Square.

These scripts and photographs are registered under © Copyright 2018, respected writers and photographers from the internet. All Rights Reserved.
Posted by ISTANBUL, Extended On Two Continents at 7:44 AM