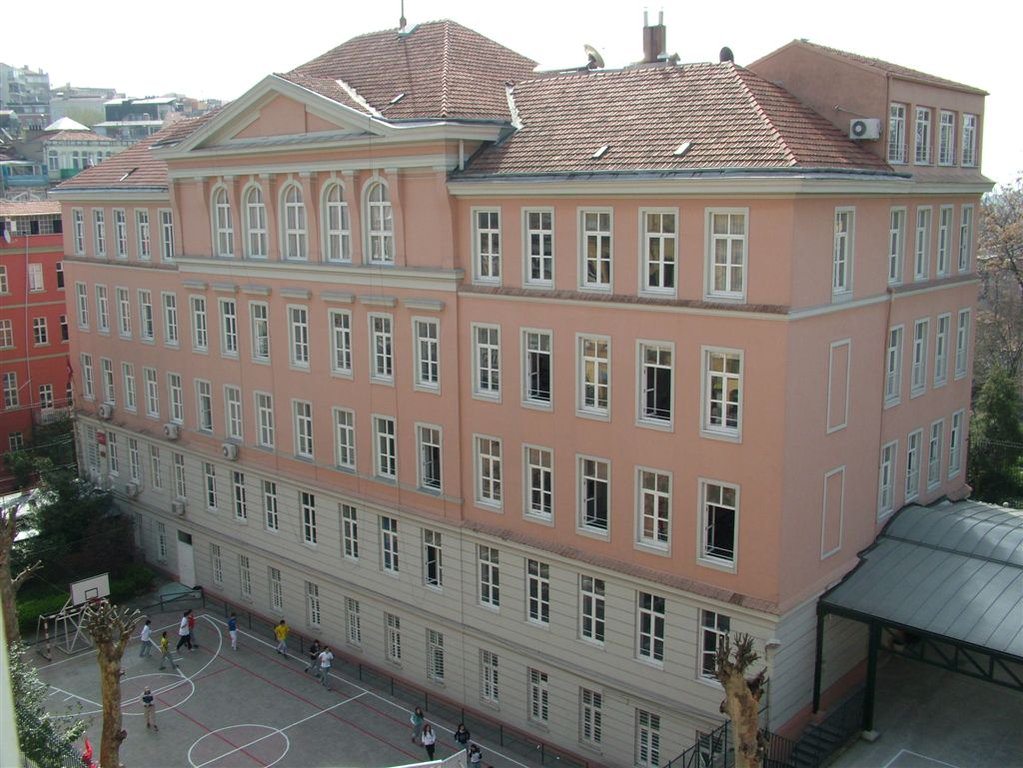 During the time of the Ottoman Empire, the Genoese, the Venetians and the Sicilians obtained the permission of the Sultan to carry out trade on the coasts of the Golden Horn, and especially in the Galata district of Istanbul. The Italian community members who settled in this district primarily spoke a dialect of Genoese. Rich families hired private tutors for the education of their children, whereas, the education of the poor was carried out by Catholic priests.

In 1861, with the initiative of Italian diplomats, an Italian school, which operated in the evenings, was founded for the community in Istanbul, but some courses such as the Italian language, arithmetic and geometry were taught at Santa Maria Draperis Church. "Societa’ Operaia", a charity association for labourers which was founded in the same year, saw the insufficiency of the school that had been opened, and appealed to the Italian Government, asking them to turn their attention toward schools outside of Italy, and in 1888 “the Royal Elementary and Secondary School” was opened in Beyoglu on Polonya (Poland) Street.

“The Italian Trade School” which was opened in 1885 at number 16, Beyoglu Hayriye Street was affiliated with the "Royal Elementary and Secondary School". In 1900, a four-year high school section was added to this three-year trade school. Students who graduated from this school had the right to enter the Italian Royal Trade College and Napoli Institute of Eastern Sciences.

In the scholastic year of 1910-1911, a four-year high school section including instruction in Latin was added to the Royal Elementary and Secondary School. During these years, Turkish students began to enroll in the school. Education at the Italian School was interrupted during the Turco-Italian War, or War of Trablusgarp. In the academic year of 1913-1914, education was resumed, but on April 30, 1915, the school was closed again because of World War I.

After the war, in 1919, the Italian secondary school, and the high school moved to the present building on Tom Tom Kaptan Street; the facility was given to Italy by the Austrians as compensation for damages during the war.

In 1920, the trade school and the high school on Polonya Street were transferred into the same building, and thus began an education effort in two fields: one secondary and high school where Latin was taught, and one secondary plus trade school. In order to give the same educational opportunity to students who did not speak Italian, a preparatory class, in which students learned the Italian language, started the same year. The school continued with some changes, and the trade school was gradually phased out - eventually closing in 1966.

The Italian High School, which began originally with a preparatory class, a three-year middle school section and a four-year high school section, now continues with a preparatory class before high school and two education tracks - the Italian-Scientific track, and the Turkish-Mathematics track. Positioning the language preparation year before the beginning of High School is to comply with the changes created by the Law of Elementary Education.

Turkish students also have the right to take this exam if they wish, and after passing the exam, are considered by The Turkish government to have obtained the equivalent of a minimum of 185 points on the ÖSS (Turkish University Entrance Exam), an academic recognition which can also be obtained by students taking the German Abitur, French Baccalaureate, GCE A-Level Certificate, or the International Baccalaureate.

The Italian High School, through its faculty, students and their parents, has witnessed many important developments, from the birth of the Turkish Republic, to the formation of the modern Turkey which we know today.

During this time, covering many years, including many historically significant events, and spanning many generations, The Italian High School has always been appreciated in the community as a distinguished educational institution. I.M.I. is known to provide a well-rounded foundation to its students with regard to both their education, and in their private and professional lives - thus helping them to become young people who are supremely valued in our society.

We are privileged, as a high school, to take advantage of the professional experiences of both Turkish and Italian teachers, and the wisdom of the governing body which guides our educational efforts, and through these we help to produce professionals of the highest standard.

The school was originally constructed out of stone, with the building techniques of its time. It consists of five 600 m2 floors, including 20 classrooms, 4 small course rooms, administrative offices, a gym on the ground floor, a computer laboratory, a conference hall and theatre stage, an art room, a library and an archive on the fourth floor.

These scripts and photographs are registered under © Copyright 2018, respected writers and photographers from the internet. All Rights Reserved.
Posted by ISTANBUL, Extended On Two Continents at 5:45 AM