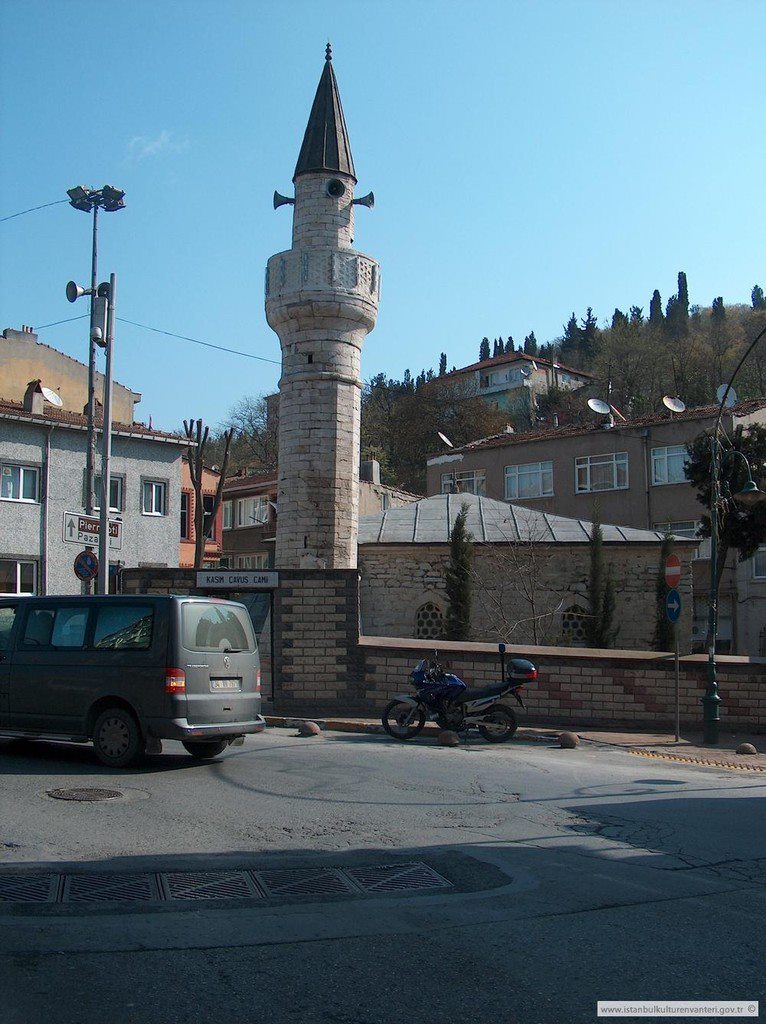 It is situated where Eski Yeni Avenue (Fahri Korutürk Avenue), İslambey Avenue and Balıkçı Bakkal Street meet. The mosque dating back to 16th  century was built by an individual named Kasım Çavuş.

The masjid after which the neighbourhood is named, stands on the corner between Eskiyeni and Balıkçı Bakkal Streets. The founder of this mosque was Kâsım Ağa (Çavuş), who participated in the conquest of Istanbul. The minber was added by Kasapbaşı Ali Ağa during the reign of Sultan Mahmud II. As a consequence of a fire on 13 Zi’l-Kaade 1239 (9 August 1824), the building was destroyed and later rebuilt by Grand Vizier Galip Paşa and Fuad Paşa in 1280 (1863).

The last great repairs to the building, which is still in use today, were made by the General Directorate of Religious Foundations in 1950. Access to the mosque is through two doors in the outer courtyard wall. Since the level of the two streets, on the corner of which the building stands, saw a rising of their level over time,access is by means of steps descending to the courtyard.

On the western side of the entrance hall on the north, there is anarched door leading to the main section. The main section of the mosque has a quasi-square shape with the dimensions of 10.35 x 9.80 m. There are two windows on each corner. The marble covered mihrab and the wooden minber are both new. The roof is supported by the inside, it has the shape of a cassette, it is flat wooden, sloping towards all four sides and covered with roof-tiles.

On the northwestern corner of the building there is a square based minaret of cut sandstone. The passage from minaret to the gallery is gradual and covered with open work plaques. The minaret is topped with a lead covered cone. There is a marble sundial with Ottoman hours on the western side of the minaret.

The main walls of the building are of rough-hewn stone and brick. 18th century tomb stones have been used to repair the uppermost part of the south wall. In the open-air enclosure to the west of the masjid there are several tombs of the 18th and 19th centuries, one of which belongs to the founder of the mosque. In addition to this, the garden contains also a big flowerpot consisting of a composite Byzantine column capital.

These scripts and photographs are registered under © Copyright 2018, respected writers and photographers from the internet. All Rights Reserved.
Posted by ISTANBUL, Extended On Two Continents at 9:41 AM