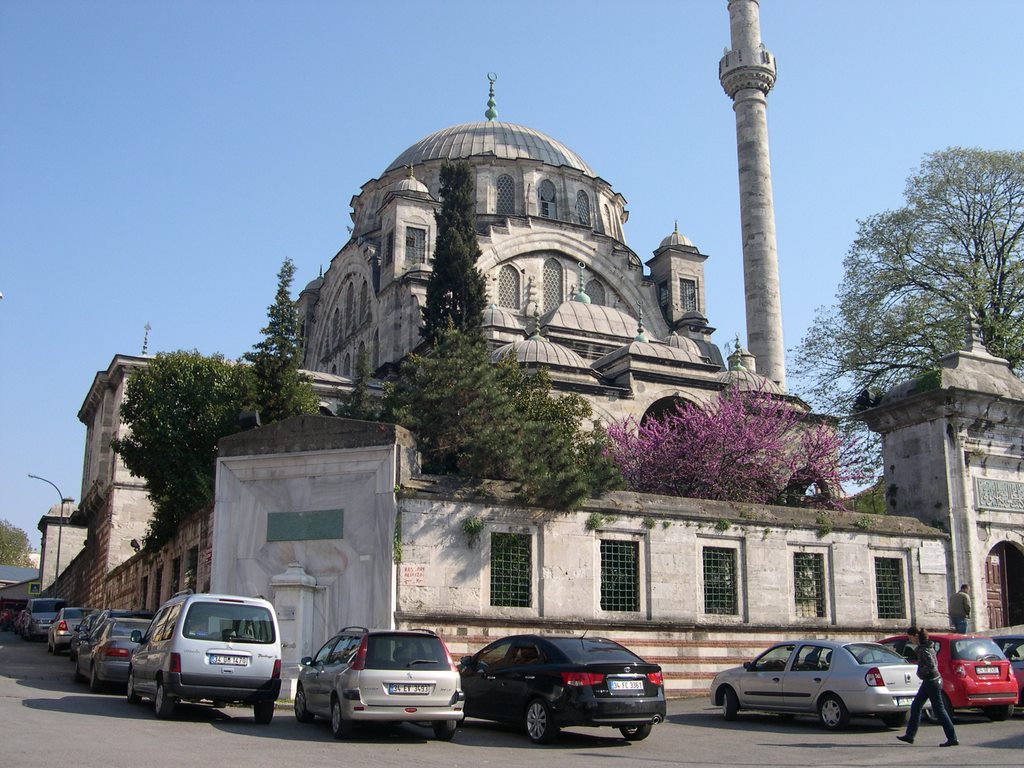 It is located in Üsküdar, between Salacak and Şemsipaşa on a hill before Marmara overlooking Kızkulesi. Sultan Mustafa III (1717-1774) had the Ayazma Mosque, which rises between the Salacak and Şemsipaşa districts of Üsküdar, built by the architect, Mehmed Tahir Ağa, in 1761. In addition, the mosque, which features predominately western style architectural aspects, was built in memory of his mother Mihrişah Emine Hatun and his elder brother Şehzade Süleyman.

It is understood from certain sources that the name of the mosque comes from the Ayazma Palace which had once been located on the site. The mosque was named after a water spring that was sacred among the ancient Greeks; this spring is located to the left of the street. The mosque is part of a large complex that consists of a school for children, baths, and a clock room. The mosque used to be in the square of the Ayazma Palace, but the palace is no longer standing.

If one leaves the mosque precinct by the back gate and follows the winding street outside, keeping firmly to the right, one comes before long to an imposing baroque mosque known as Ayazma Camii. It is one of the more successful of the baroque mosques, especially on the exterior. A handsome entrance portal opens onto a courtyard from which a pretty flight of semicircular steps leads up to the mosque porch.

On the left is a large cistern and beyond an elaborate two-storeyed colonnade gives access to the imperial loge. The upper structure is also diversified with little domes and turrets, and many windows give light to the interior. The interior, as generally in baroque mosques, is less successful, though the grey marble gallery along the entrance wall, supported by slender columns, is effective.

The Ayazma Mosque has been renovated several times during its lifetime. A new minaret has been built twice on the site of the demolished minaret. The muvakkitkane (time-keeping room) and the bath, which was built to generate income for the mosque, as well as many stores of the mosque have not reached the present day. According to the archival document, Ayazma Palace, in the place of Ayazma Mosque, was restored in 1740s and allocated to ambassador of Iran.

Birdhouses are built into the walls on each side of the doors. There is a sundial in the corner of the right façade. The pulpit of this mosque is a masterpiece of stonework. Dozens of ostrich eggs were hung on the circular oil lamp above in order to prevent the formation of cobwebs. There is no clear reason as to why the eggs have been removed today. In the courtyard there is a very large pool that was intended to be used in case of fire.

The mosque, which is placed in the middle of a wide field, is located on a hillside overlooking Istanbul. It is said that the architect, Mehmed Tahir Ağa, put 8,750 eggs, 625 okka of honey (an okka is the old Turkish weight measure, equalling 1,285 gr.) and quicksilver worth 1,080 kuruş (a kuruş is one hunderdth of the old Turkish pound) into the mixture he used as cement.

In addition to Western architectural elements, classical designs have added a different complexion to the structure. The main space of the building is built on a rectangular plan and is covered by a dome resting on four elephant legs. The Hünkar Köşk (Royal residence) of the building, built next to the mosque, is situated on the left hand side of the main site. A variety of colourful stones are used to decorate the sermon area, the niche, and the pulpit of the mosque.

Decorations with gold latten are used in the royal residence and are the creation of highly skilled craftsmanship. Furthermore, the pulpit, composed of colourful, engraved marble stones, as well as the niche, made of porphyry stones, are further reflections of the skilled workmanship of the building. The scripts on the portal gate belong to the calligrapher, Seyyid Abdullah, and scripts on the plaster windows belong to calligrapher, Seyyid Mustafa.

The structure is understood to have been dated to 1760 - 1761 from the inscriptions upon the door. According to the expense book, held very carefuly, 506.095 piasters 49 coins were spent for the mosque. The mosque inscription was inscribed with talik calligraphy by Sheikh ul-islam and Calligrapher Veliyüddin Efendi. The tiles on the wall of royal box are Italian.

The altar is made of white porphyry and the carved pulpit is made of colored marble. Calligraphies in the mosque belong to Seyyid Abdullah and calligrapher Seyyid Mustafa. Bird’s nests on the outer walls of the mosque and the sundial on the right wall are noteworthy. The central dome with 20 windows is supported by four elephant feet. The mosque has 86 windows in total.

There is a fountain located on one corner of the wall surrounding the courtyard of the Ayazma Mosque that was built during the same year with the mosque. The inscription written on the fountain belongs to the poet, Zihni.There are graves of several notable individuals of the Ottoman Palace in the mosque’s graveyard. The big marble fountain, in the corner of the wall surrounding the large courtyard, is understood from the inscription of Poet Zihni that it was built along with the mosque in 1761.

When Sultan Mahmud II abolished the Janissaries in 1826, he removed every symbol that could act as a reminder of them, including their tombstones. The only two tombs of Janissaries that have survived until today are in the graveyard of this mosque.

Leaving by the south gate and following the street to the east, one comes to a wider street, Doğancılar Caddesi, with two pretty baroque çeşmes at the intersection; turning right one finds at the end of this street a severely plain türbe built by Sinan for Hacı Mehmet Paşa, who died in 1559. It stands on an octagonal terrace bristling with tombstones and overshadowed by a dying terebinth tree.

It is one of the mosques under influence of European artistic style. It was commissioned by Sultan Mustafa his mother Mihrişah Emine Sultan. One can take the stairs to go up to the mosque from a three-gate courtyard. The minaret has single balcony. Central dome which has 20 windows is situated on four elephant legs. The floor is paved with marble. It has a total of 86 windows.

The mosque is part of a large complex that consists of a school for children, baths, and a clock room. There is a very beautiful fountain in the left corner. The mosque used to be in the square of the Ayazma Palace, but the palace is no longer standing. Birdhouses are built into the walls on each side of the doors. There is a sundial in the corner of the right façade. The pulpit of this mosque is a masterpiece of stonework.

These scripts and photographs are registered under © Copyright 2018, respected writers and photographers from the internet. All Rights Reserved.
Posted by ISTANBUL, Extended On Two Continents at 6:21 AM