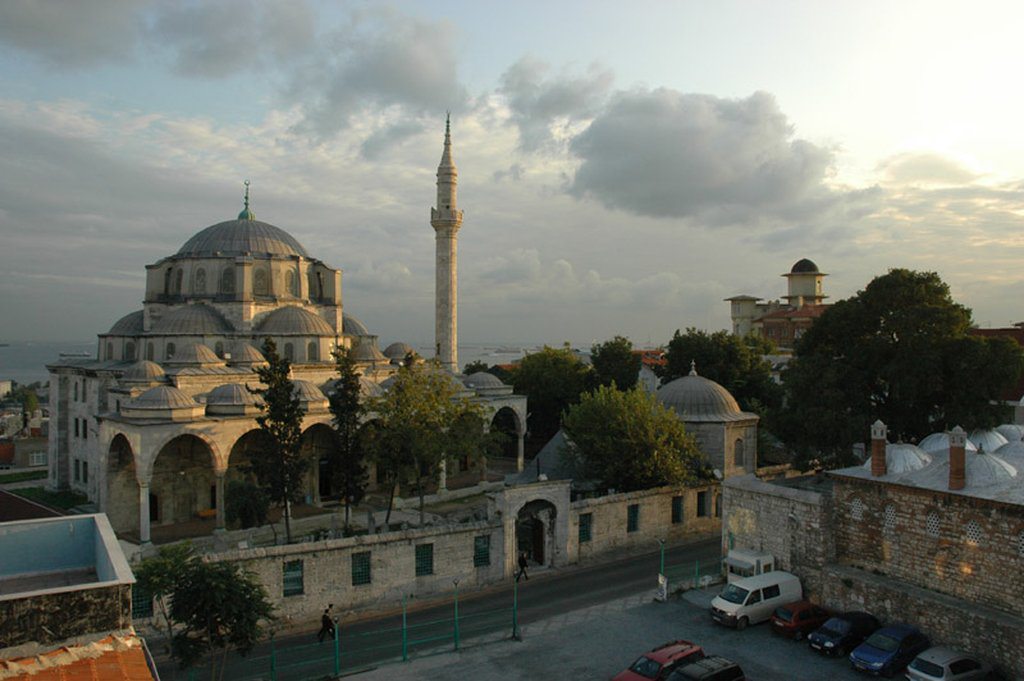 A short way along the left side of the avenue we come to an imposing  mosque in its walled garden. This is Cerrah Paşa Cami, after which the avenue and the surrounding neighbourhood are named. Cerrah Mehmet Paşa, who founded it.

Cerrah Mehmed Pasha was an Ottoman statesman. He was Grand Vizier of the Ottoman Empire from 1598-1599. Cerrah Mehmet, who rose rapidly after circumcising Sultan Mehmet III, became grand vizier in 1598. The Pasha was discharged at the end of the unsuccessful Hungarian campaign even though Sultan Mehmet III warned the Pasha that he would have him cut up into four pieces if he was defeated.

Cerrah Mehmet Pasha, who died in 1604 and was buried with his three sons in a octagonal tomb made of cut stone. The türbe of the founder, a simple octagonal building, is in front of the mosque beside the entrance gate. Nearby is a ruined şadırvan and outside in the corner of the precinct wall is a pretty çeşme. The complex originally included an interesting hamam which unfortunately has been destroyed.

An Arabic inscription over the door gives the date as A.H. 1002 (A.D. 1593); the architect was Davut Ağa, Sinan’s successor as Chief Architect. One might rank Cerrah Paşa Camii among the half-dozen most successful of the vezirial mosques.

Its plan presents an interesting modification of the hexagon-in-rectangle type. The four domes which flank the central dome at the corners, instead of being oriented along the diagonals of the rectangle, are parallel with the cross axis. This plan has the advantage that, for any hexagon, the width of the building can be increased without limit.

Eight antique columns stand on the narthex of the mosque, which was constructed of cut kufeki stone. Four columns were made of Marmara island granite, two from Teb granite, two from Egypt marble. The hand - carvings seen on the central dome 13 meters in diameter, are from a late period.

The exterior, too, is impressive by its proportions, in spite of the ruined state of the porch and the unfortunate restoration job that was done on the domes and semidomes. The porch originally had seven bays and its eight handsome antique columns are still standing, four of Proconnesian marble, two of Theban granite, and two of Syenitic granite.

Such a plan was never used by Sinan and is seen again only in Hekimoğlu Ali Paşa Camii, which is a little farther west on this same hill. The mihrab is in a rectangular apse which projects from the east wall. The galleries, which run around three sides of the building, are supported by pretty ogive arches with polychrome voussoirs of white stone and red conglomerate marble; in some of the spandrels there are very charming rosettes.

In short, the interior is elegant in detail and gives a sense of spaciousness and light. The exterior, too, is impressive by its proportions, in spite of the ruined state of the porch and the unfortunate restoration job that was done on the domes and semidomes. The porch originally had seven bays and its eight handsome antique columns are still standing, four of Proconnesian marble, two of Theban granite, and two of Syenitic granite.

Located on the western side of the tomb, building which has a square plan and a tiled roof, is muvakkithane (timekeeping house). Finished in 1598, the double bath of the complex was removed between 1908 and 1910.

Cerrah Mehmet Paşa, who founded it, had been a barber and therefore a surgeon (cerrah), having gotten this official title by performing the circumcision of the future Sultan Mehmet III. The latter in 1598 appointed him Grand Vezir and wrote him a letter warning him that he would be drawn and quartered if he did not do his duty. But he was only required to do his duty for six months or so, for he was dismissed - without being drawn and quartered - in consequence of the ill success of the war against Hungary.

These scripts and photographs are registered under © Copyright 2018, respected writers and photographers from the internet. All Rights Reserved.
Posted by ISTANBUL, Extended On Two Continents at 9:22 AM