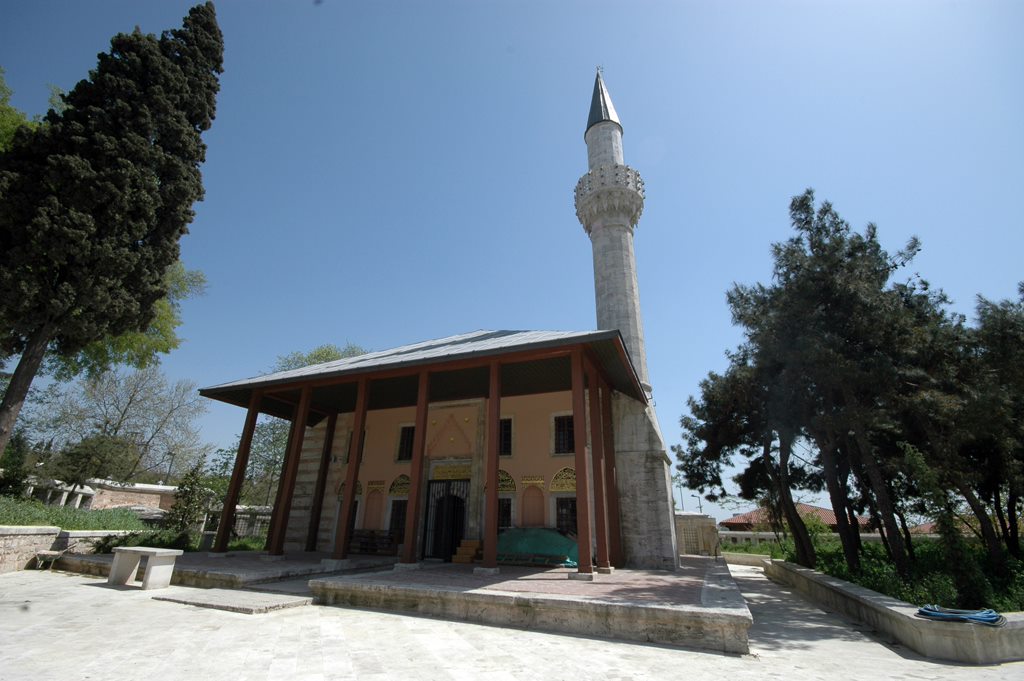 The Takkeci Ibrahim Ağa Mosque is located outside the Byzantine land walls, on the old road to Edirne (Adrinople) across from the historic Topkapı cemetery. It was built by Takkeci Ibrahim Ağa (d. 1595), a local craftsman of soft felt dervish caps (takke or arakiye) during the rule of Sultan Murad III between 1591-1592.

At the time it was built, the mosque stood in one of the first Ottoman settlements outside the city walls and was used as a tekiyya (tekke) of the Halveti order. A Quranic school (mekteb) and two sabils (sebil) were built near the mosque to serve the needs of the neighborhood and Dervis Paşa added a fountain in 1819. Between 1830-1831, a comprehensive restoration was conducted by the order of Sultan Mahmud II. The ban on tekiyyas during the Republican years transformed the functions of the mosque.

The mosque was then severed from its neighborhood with the construction of the E-5 highway to the west of the mosque in the 1950s. Its neighborhood to the south and east were wiped away by industrialization; a project is currently underway by the Zeytinburnu Municipality to create an arts and crafts village to the east of the mosque.

The mosque is diagonally positioned in a rectangular walled-in precinct that is entered from three gates, with the main gate located across from the Topkapı cemetery to the north. Immediately behind the mosque within precinct walls are a small single-story Quranic school, a well, and an open-sabil with a tall inscriptive plaque. Built of cut stone alternated with double rows of bricks, the mosque is a simple rectangular building wrapped by a tall wooden portico with a zigzag gable roof.

Entering the mosque through the portico, an inscription above the simple marble entrance gives the name of the donor and the date of construction. There is a mihrab niche on either side of the entrance and the lower windows of the entry façade have been adorned with Quranic excerpts in their tympana. The door is an example of the interlocked woodwork (kündekari) of the period. A second entrance is located next to the minaret, along the northeastern wall.

Inside, the prayer hall 11.7 meters long and 11.25 meters wide and is crowned by a small wooden dome at its center. The dome, which is 5.5 meters in diameter, is concealed with a hipped roof on the exterior that rises above the portico roof. It is decorated with a band of gilt stalactites at its rim and a calligraphic medallion at its apex painted on deerskin. This dome is a rare example of the few such concealed domes in Istanbul, seen also seventeenth century Amcazade Hüseyin Seaside Mansion and the Twin Kiosks at the Topkapı Palace harem.

The interior is lit by twenty-eight windows placed at two levels. The lower windows are casements; they have tiles in their tympana except along the qibla wall where Quranic inscriptions are painted gold on black. The arched upper windows display fine arrangements of white and colored glass and are framed with painted decorations. A wooden balcony (mahfil), raised on wooden pillars, flanks the northwest wall and extends midway along the sidewalls and is used primarily by the müezzin.

The Takkeci Ibrahim Ağa Mosque is famous for its sixteenth century Iznik tiles that adorn the walls from the floor to the upper windows. Painted in red, light blue, turquoise and navy blue on a white glazed surface, the tiles are combined into large floral panels. The mihrab niche, crowned with stalactites, is also covered with tiles and is topped with a prayer inscribed on tiles. The minbar, to its right, is carved entirely of marble.

This is the only wooden mosque in Istanbul that appears to preserve essentially its original appearance. It is rectangular in form, with a wooden roof and porch. This is the simplest and cheapest to build and is therefore the commonest of all mosque types; but in almost all surviving examples the wooden roof and porch have succumbed to fire and have been reconstructed even more cheaply, losing thereby their charm and distinction.

Doubtless because of its isolation in the country outside the walls, Takkeci Ibrahim Ağa Camii seems to have escaped the fires and has preserved its original porch and roof. It was founded in 1592 by a certain Ibrahim who was a maker of the felt hats called takke or arakiye, especially the long conical kind worn by the dervishes.

A stone wall with grilles and the remains of a fine sebil at the corner surrounds the mosque courtyard-garden. The deeply projecting wooden tiled roof of the porch is supported by a double row of wooden pillars. Since the porch extends halfway round both sides of the mosque, the pillars give the effect of a little copse of trees, the more so since the paint has long since worn off. The roof itself has three dashing gables along the façade; a very quaint and pretty arrangement.

On the right rises the fine minaret with a beautiful stalactited şerefe. Handsome but rather heavy inscriptions adorn the spaces over the door and windows. Within, a wooden balcony runs round the west wall and half of the side walls; it has a cornice which preserves the original arabesque painting, such as we have just seen at Kara Ahmet Paşa Mosque .

The ceiling is of wood painted dark green and in the centre is a wooden dome on an octagonal cornice; one sees how greatly the dome adds to the charm of the interior and what a disaster it is when these ceilings are reconstructed flat. Two rows of windows admit light; the tiny one over the mihrab preserves some ancient, brilliant stained glass. Beneath the upper row of windows the walls are entirely revetted with tiles of the greatest period of Iznik in great panels with vases of leaves and flowers.

The mosque has a single minaret attached to the northeast façade, which is accessed from the exterior or from the müezzin's balcony on the inside. Its multifaceted shaft is constructed of cut stone and carries a single stalactite balcony (şerefe). The fountain built by Derviş Paşa adjoins the northeast corner of the precinct walls facing the street. Across from it is the second sabil, currently in ruins, with the tombs of Ibrahim Paşa and his son Halil Çavus in the cemetery behind it.

It was repaired twice in the past. The first was done in 1830 and the latter was done in 1985 by Vakıflar İdaresi (Directorate of Religious Foundations).

He is buried in the sebil (kiosk built for the dispensing of free drinking water to people) next to Ibrahim Efendi Mosque. The Takkeci Ibrahim Ağa Mosque that was built during the reign of Sultan Selim III is still open for prayers.

These scripts and photographs are registered under © Copyright 2018, respected writers and photographers from the internet. All Rights Reserved.
Posted by ISTANBUL, Extended On Two Continents at 12:53 AM