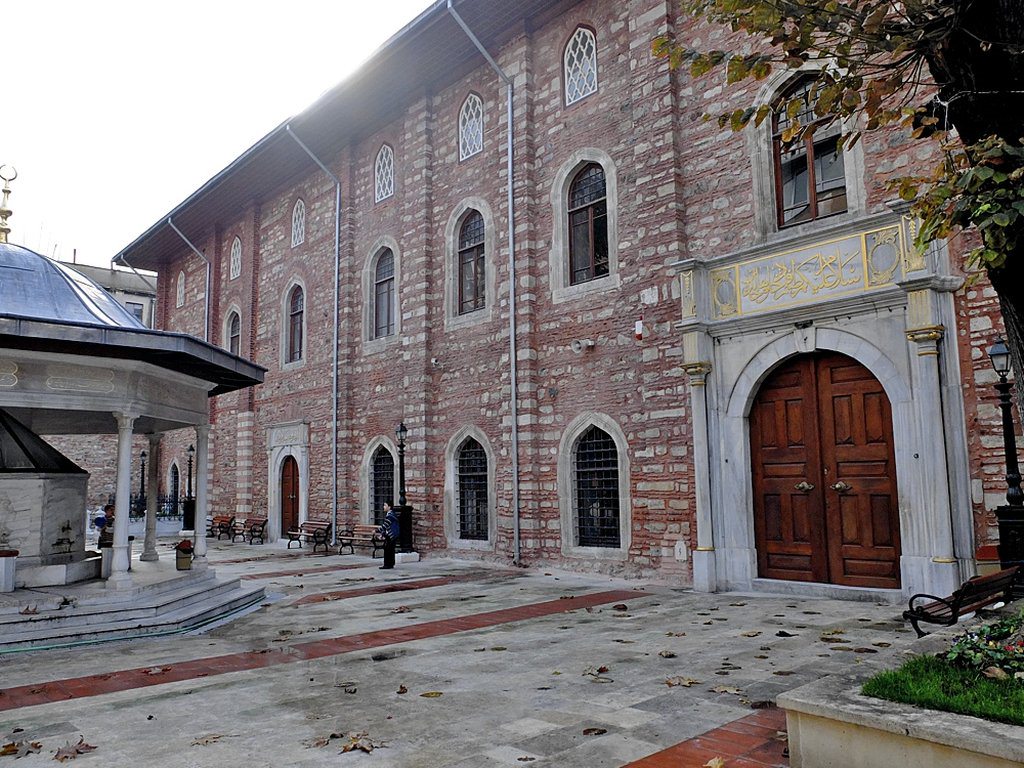 The building lies in Istanbul, in the district of Beyoğlu, in the neighborhood of  Karaköy (medieval Galata), on Galata Mahkemesi Sokak, not far from the northern shores of the Golden Horn. It is surrounded by artisan shops.

There is no specific information detailing when and by whom the mosque was built. Although there are legends saying that the mosque was built by Arabs surrounding Istanbul, the thesis describing the presence of a church named Mesa Domeniko situated on the mosque’s current foundation during the Byzantine period which was later converted into a mosque after the conquest of Istanbul by Sultan Mehmet II,  is stronger.

Arap Mosque (Turkish: Arap Camii, literally Arab Mosque) is a mosque in the Karaköy (historically Galata) quarter of Istanbul, Turkey. It was built in 1325 by the friars of the Dominican Order near or above a former 13th century Roman Catholic chapel devoted to Saint Paul (Italian: San Paolo) in 1233. Although the structure was altered during the Ottoman period, it represents the only example of religious Gothic Architecture remaining in Istanbul.

The church was converted into a mosque by the Ottomans between 1475 and 1478, during the reign of Sultan Mehmed II, and became known as the Galata Mosque. It was later given by Sultan Bayezid II to the Muslim Arab refugees from Al-Andalus who - together with the Sephardic Jews - escaped the Spanish Inquisition in 1492 and settled in the Galata neighborhood of Istanbul (hence its current name, Arab Mosque.)

During the sixth century a Byzantine church, possibly dedicated to Saint Irene, was built here. Of this building, only part of a wall survives today. The tradition which affirms that a mosque was built on this place during the Arab Siege of Constantinople (717-18) by Maslamah ibn Abd al-Malik (a commander and cousin of Caliph Umar II) must be considered a legend, as the Arabs laid siege to the land walls of Constantinople on the southern part of the Golden Horn and never penetrated into the citadel of Galata (Pera) at the northern shore.

In 1233, during the Latin Empire of Constantinople (1204-1261) after the Fourth Crusade, this church was replaced with a small chapel, dedicated to Saint Paul (San Paolo). It was completed and inaugurated in 1233 as the Church of Saint Paul, built by the Dominican priests of the Roman Catholic Church, during the Latin Empire of Constantinople (1204-1261). Constructed following the Italian model of that period, the church had a squared-off eastern end with a square sanctuary and chapels covered by ribbed groin vaults. Lancet windows and the prominent bell tower distinguished the building from the Byzantine churches in the city.

In 1299, the Dominican Friar Guillaume Bernard de Sévérac bought a house near the church, where he established a monastery with 12 friars. In 1307, Byzantine Emperor Andronikos II Palaiologos moved the Dominicans of Constantinople to the Genoese-held suburb of Pera.

A new, much larger church was built near of above the chapel of San Paolo in 1325. From this time on the church was officially dedicated to San Domenico, but local voyagers continued to use the ancient denomination. In 1407 Pope Gregory XII, in order to ensure the maintenance of the church, conceded indulgences to the visitors of the monastery of San Paolo.

In 1407, the church was extensively repaired and restored with the financial aid of the Papacy. In 1475, it was transformed into a mosque by the Ottoman Sultan Mehmed II and became known as Galata Camii (Galata Mosque). In 1492, the mosque was given to the Arabs of Spain (Andalusia), who fled the Spanish Inquisition and migrated to Istanbul, by Sultan Bayezid II; hence the present name Arap Camii (Arab Mosque).

After the Fall of Constantinople, according to the Capitulations of the Ottoman Empire with the Republic of Genoa, the church, which by that time was known by the Turks under the name of Mesa Domenico, remained in Genoese hands, but between 1475 and 1478 it was transformed, with minor modifications, into a mosque by the Ottoman Sultan Mehmed II and became known as Galata Camii (Galata Mosque) or Cami-i Kebir (Great Mosque). The friars were transferred in the friary of San Pietro in Galata in 1476, while all the altar clothes had already been brought to Genoa, and the archives to Caffa.

Towards the end of the century Sultan Bayezid II assigned the building to the Muslims of Spain (Andalusia), p. who fled the Spanish Inquisition and migrated to Istanbul; hence the present name Arap Camii (Arab Mosque). Sultan Mehmet III repaired the building, and towards the end of seventeenth century the houses which encroached upon the mosque were pulled down in order to avoid noise.

After the 1731 Great Fire of Galata, in 1734/35 the mother of Sultan Mahmut I (1730-1754), Saliha Sultan renovated the building, changing the windows and the portal from the Gothic to the Ottoman style. After another fire in 1808, in the mid-nineteenth century, the daughter of Sultan Mahmud II, Adile Sultan, repaired the mosque again and in 1868 built a şadirvan (fountain for ritual ablutions before praying) in the courtyard.

Despite the fire in 1807, the building was renovated again, and a short history of the mosque was inscribed on a stone tablet by Hacı Emin Efendi (a secretary member of the Imperial Council) and was placed on the wall beside the niche. After these renovations were completed, the mosque also underwent a large scale renovation in 1868 and in 1913. As for the fountain that exists today, it was added to the mosque after the renovations in 1868.

Between 1913 and 1919, Giridli Hasan Bey extensively restored the edifice again. During the replacement of the wooden floor, several Genoese tombstones dating back to between the first half of fourteenth and up to the middle of the fifteenth centuries were discovered. They were brought to the Istanbul Archaeology Museum. As of 2012, the mosque is undergoing an extensive restoration.

This historical mosque was built on a rectangular plan in Gothic style architecture. As for the minaret of the mosque, with its extraordinary lines, reaches toward the sky on the site of the bell tower of the old church.

Erected according to the model of the Italian mendicant order churches of that period, the church had a three-nave rectangular base, with squared-off eastern end and a square sanctuary which is covered by ribbed groin vaults.

The Gothic-style portal, lancet windows and the prominent bell tower (which has been transformed into a minaret by the addition of a conical roof) distinguished the building from the Byzantine churches in the city. On the other side, the technique used for the brickwork was local, and alternated small courses of bricks and ashlar.

The NE nave was possibly flanked by a series of chapels, each of them belonging to a noble Genoese family. One of them was dedicated to the Virgin Mary, and another to Saint Nicholas. As a whole, the building resembled the churches of Chieri and Finale Ligure in Italy.

The flat wooden roof and rather pretty wooden galleries date from the restoration in 1913-1919. On this occasion, the height of the building was lowered, and many Genoese headstones were found. During the same restorations, rests of paintings were also discovered near the Mihrab, but were covered again. In the passage under the belfry, moldings are still visible, as well as fragments of stones with armorial bearings which were once placed along the wall. On the north side of the building there is a large and attractive courtyard with a şadırvan.

Today, Arap Camii is the largest mosque on the Galata side of the Golden Horn. It is one of the most interesting mosques in the city due to its early Italian Gothic architectural style and church belfry, which has practically remained unaltered even after being converted into a minaret.

These scripts and photographs are registered under © Copyright 2018, respected writers and photographers from the internet. All Rights Reserved.
Posted by ISTANBUL, Extended On Two Continents at 4:03 AM