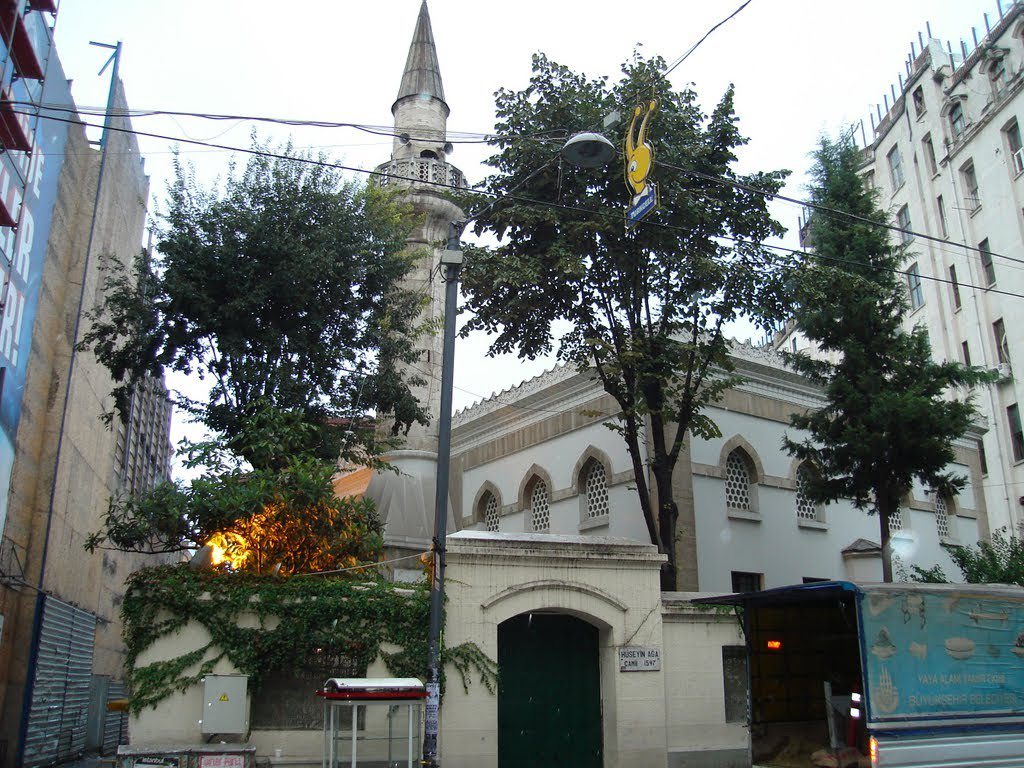 Start down Istiklal Caddesi and go as far as the stone wall on the right behind which is a small mosque. This is the Hüseyin Ağa Mosque, never very noticeable except on Fridays at noon prayer time. Then the worshipers fill the he mosque to capacity and spill out onto the street. Many of the men who come to pray have shops near the small mosque and little time to spend to go further afield.

The Hüseyin Ağa Mosque, which dates back to the end of the 16th century is a sweet little place with its Kütahya tiles, calligraphy, colored glass windows and floors covered with İsparta rugs. It will look even better when the long-awaited restoration project is completed.

Beyoğlu attracted foreigners, as the old embassies - now consulates - along Istiklal Caddesi attest. There were also numerous Christian churches of one denomination or another, but Ağa Camii is the only Muslim mosque along the entire length of the street and that is perhaps why it was built. The Taksim area in 1596 would still have been sparsely inhabited, open countryside.

Hüseyin Ağa, the mosque’s builder, held two prominent positions during his lifetime. Although he was a eunuch, he was appointed the Sheikh-ul-Harem in the second half of the 16th century. The Ottomans gained control over Mecca and Medina with the conquest of Egypt in 1517, but they were so engaged with war in the Balkans and with the Safavid Persians that they seem to have done little with the two cities until the 1580s. In 1582, the architect Mehmed Ağa renovated the courtyard around the Ka’bah, and in 1585 further renovations were made.

This was the first time that a large-scale Muslim settlement was built outside of old Istanbul. The place included a mosque, medrese (school), barracks and kitchens. The curriculum included manners and the art of conversing, reading, writing prose and poetry and various military accomplishments such as horsemanship, archery and lance-throwing. Arabic and Persian were taught, and how to compose and perform musical pieces.

Hüseyin Ağa had been a kadi (judge) in Medina before becoming the Sheikh ul-Harem. As the latter he was one of the most important people in the area and was responsible for disciplining the other Ağas and looking after any legal claims that might be made against these eunuchs. Of his other responsibilities, he would receive ten gold pieces from official funds every year to pay for the pilgrimage and supervise the people of Medina.

In 1585, for instance, the funds were late and the Sheikh ul-Harem lodged an official complaint over the matter. This official took it upon himself to confiscate a grain shipment that had arrived at Yanbu port and distributed it among the people of Medina. The need for such an official was the result of having no governor (vali) appointed for Medina. The Sheikh ul-Harem also undertook such duties as seeing that wages were paid, repairing water systems, settling disputes and submitting reports to Istanbul on how grain donations were handled.

From Medina, Hüseyin Ağa was made the head of the palace educational institution where Galatasaray Lycee now stands. According to the legend, Sultan Bayezid II (r. 1481-1521) was hunting and stopped for a drink of water. When he asked that person if he had a wish, the latter wanted an institution of learning built there.

The Ottomans had instituted a levy on young Christian boys from villages and educated them. These would subsequently be assigned positions within the imperial palace or with the Janissary military corps after successively completing their lessons and becoming Muslims. But space at Topkapı Palace was limited, so the lower grades were moved elsewhere. The principal school offering these lower grades was Galatasaray, which had been set up by Sultan Selim I (r. 1512-20), the son of Sultan Bayezid II.

Hüseyin Ağa was undoubtedly a product of this system, so he would know the school at Galatasaray well, and it would not have been surprising to see him appointed rector. He would have been educated among the white eunuchs who controlled the harem at Topkapı Palace and the outer service. He possibly was a protege of Sokollu Mehmed Pasha, who was the grand vizier of Kanuni Sultan Süleyman I between 1565 and 1579 and who was responsible for the Ottoman conquest of Yemen in 1571.

These scripts and photographs are registered under © Copyright 2018, respected writers and photographers from the internet. All Rights Reserved.
Posted by ISTANBUL, Extended On Two Continents at 3:58 AM