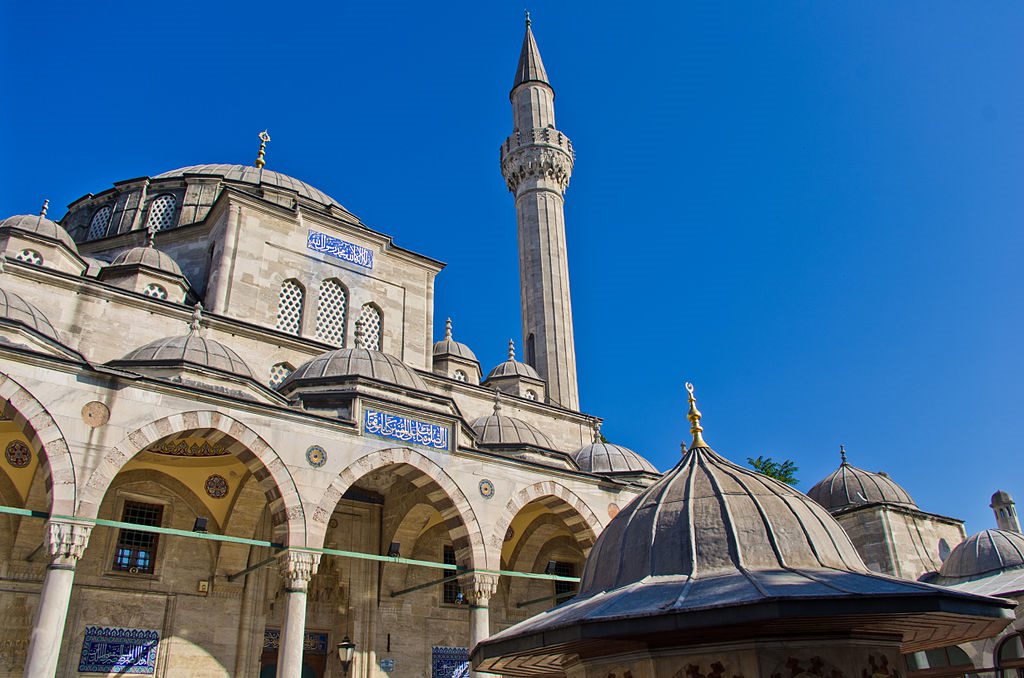 Comissioned by grand vizier Sokullu Mehmet Paşa (1506-1579) for his wife Ismihan Sultan, daughter of Sultan Selim II (1566-1574), the Sokullu Mehmet Paşa Complex at Kadırga was built by Sinan simultaneously with the Sultan Selim II Complex in Edirne. Most probably, Sinan designed the mosque before moving to Edirne and returned periodically to supervise construction. The four line inscription over the portal of the mosque gives 1571 as its construction date, and indicates that the site also housed the (collapsed) Aya Anastasia Church.

The mosque is officially named after Princess Esmahan, but is more commonly known for its association with her far more famous husband. The complex is composed of a mosque, a madrasa (theological school attached to a mosque), and a tekke (dervish lodge).

It is surrounded by walls that measure approximately two meters. There are three different entrances to the courtyard, which has a domed fountain in the middle. From the fountain, you can see the rooms in the madrasah. The audio and lighting system of the mosque is quite good, just like in all Mimar Sinan-built structures. Like in many historic buildings, the mosque is decorated with İznik tiles and handmade artwork.

It is also said that pieces of the Black Stone - also known as al Hajar ul Aswad, located in the Kaaba, whose origin is believed to date back to Prophet Adam - are embedded in the mosque's mihrab (alter), minber (pulpit) and dome sections. The mosque is important in this respect as well. There are 4 small pieces of Hajar al Aswad embedded in the walls. Each one is about 3 centimeters by 2 centimeters. One is over the mihrab, one is below the lower "pulpit", another is above the upper pulpit and the last is over the entrance door. The lowest one, below the lower pulpit can just be touched by standing on a red-carpeted step.

It was built on an inclined slope, where the Aya Anastasia Church had already been placed during the Byzantine period. The architecture of the complex is Sinan the Architecture,  who marked to the Ottoman Architecture. Prayer hall of the complex’s mosque, 15.30 x 18.80 m, is placed on six pier foundation and capped by a hexagonal dome with a diameter of 13 m.

The decorative niche (mihrab) with its prismatic shape and pulpit are the finest example of marble workmanship of the time. Especially, the tile wainscot of the pulpit’s cone and providing glazed tiles on the both side of the niche have added an orginal pleasure to visual integrity. There are totally more than 90 windows in the mosque and these are usually concentrating on lateral facade and pulley. On the minaret of the mosque with a single sherefe (minaret balcony), which was built from cut stone, vertical lines exist that the Sinan the Architecture had already used in his works.

There is a madrasa of the complex that has 16 rooms and a classroom that the ceiling was composed of a dome in the inner court of the mosque. In the middle of the court, there is a fountain integrated with the court, which has also artistic value.

The complex is built on a site that descends to the south. The madrasa, the mosque and the tekke are placed from south to north. The main entrance to the complex is at the lowest part of the complex on the south, five meters below the courtyard level. One passes below the classroom of the madrasa and climbs a staircase to reach the courtyard. This ascending entrance creates a direct vista to the dodecagonal fountain with its tapering dome and the portico, sequentially rising to the graded structure of the mosque behind. From within, the modest-sized courtyard is dominated by the height of the mosque.

The courtyard is surrounded by the portico of the mosque on the south and by the madrasa on the other three sides. The classroom is elevated and fronted by a domed bay, and is accessed by two staircases along its sides. In volume, it is a square box measuring about six and a half meters per side; it is lit by twelve windows in two rows. Together with the classroom, the madrasa consists of sixteen symmetrically arranged domed cells, which are each about four meters wide. These cells are accessed through the doors beneath the portico, which is supported by eighteen columns.

The prayer hall is entered through the deep portal in the middle bay of the portico, and measures about fifteen and a half by nineteen meters. The elevated balcony over its entrance enhances the instant perception of the interior space. The main dome, which measures thirteen meters in diameter, surmounts the central space with an apex of twenty-six meters. The load from the dome is transferred to six "elephant feet," or colossal piers, located on the vertices of a slightly compressed equilateral hexagon by arches flanked by half domes.

Unlike in conventional placement, the semi-domes fit into the asymmetrical triangles between the main dome and the walls of the prayer hall, creating an innovative adoption of the structure to a new structural schema. This treatment of the zone of transition is unique to this mosque. These piers are elegantly embedded into the walls of the prayer hall, assisting the unity of the interior space. Four of these six feet, which have rectangular sections, divide the south and east walls into three sections. The western and eastern walls, with the two polygonal feet embedded in their centers, contain the narrow side galleries, where flat roofs are carried by iron structural members.

The marble platform for the müezzin, carried over five columns, is placed to the east of the entrance in the prayer hall. The graded structural development of the mosque on the exterior reflects the spatial configuration on the interior, with the graded levels of the muezzin's platform, the side galleries, and the balcony over the entrance. A total of ninety-eight windows light the prayer hall, eighteen of which pierce the drum of the dome, and the stained glass in the windows creates a colorful ambiance.

The mosque is highly ornamented, beginning with the portico frames; the tiled decoration climbs to the pendentives of the dome in the middle of the qibla wall. The marble mihrab, ornamented with polygonal arabesque and muqarnas carvings, is placed between the two tiled frames on the qibla wall. Stained glass is framed with plaster above the mihrab, and the tiled crown of the minbar completes the ornamental scheme. Compared to its contemporaries, this mosque also contains a large number of inscriptions. The tekke, which is entered from the south, is located four meters above the level of the mosque.

A domed entrance bay leads to the entrance hall, which is comprised of ten bays arranged in rows of five. Excepting the bay attached to the door of the religious ceremony space (tevhidhane), which is surmounted by a mirror vault, all of the bays are topped by domes. The religious ceremonial space is a single domed structure which measures about twelve and a half by seven and a half meters. Centered in a courtyard, this domed structure is surrounded by cells on its west and east sides. Both the eastern and western cell rows, which are, respectively, one and two stories high, are fronted by porticos.

These scripts and photographs are registered under © Copyright 2018, respected writers and photographers from the internet. All Rights Reserved.
Posted by ISTANBUL, Extended On Two Continents at 6:02 AM