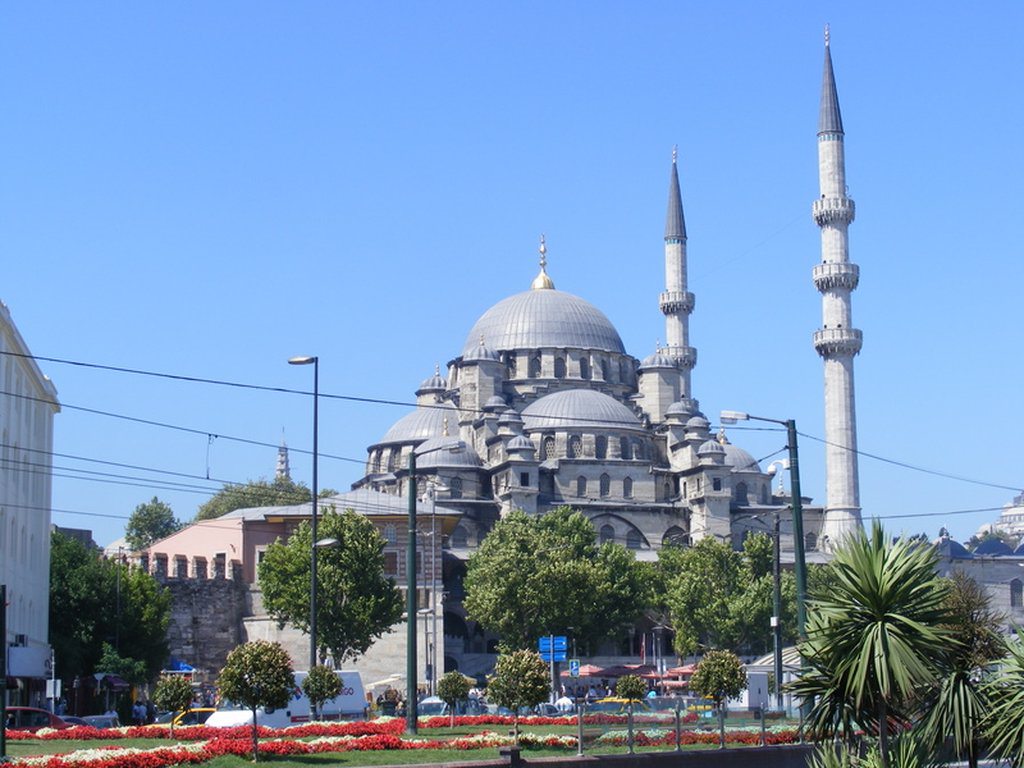 The Yeni Valide Mosque, more widely known as the Yeni or new mosque, is located adjoining the harbor on the southern bank of the Golden Horn, at the foot of the bridge connecting the historic peninsula with Karaköy to the north. Began in 1597 by Safiye Sultan, the mother of Mehmed III (1595-1603) and completed more than half a century later by Turhan Hatice Sultan, the mother of Mehmed IV (1648-1687), the mosque stands in a long tradition of architectural patronage by Ottoman queen mothers or valides. A dense Jewish neighborhood was cleared for the mosque designed by architect Davud Ağa, replaced by Dalgıç Mehmed Ağa after his death in 1598 until work halted in 1603.

Architect Mustafa Ağa completed the mosque between 1661 and 1663 and built a sultan's kiosk (hünkar kasrı), a room for Quran readers (darülkurra), tomb (türbe), Quranic school (sibyan mektebi), sabil (sebil), public fountains (çeşme), stores (dükkan) and a closed spice market known as the Egyptian bazaar (Mısır Çarşısı) around the mosque. A room for the mosque timekeeper (muvakkithane) was added in the nineteenth century. Details concerning the construction and organization of the complex are documented in waqf documents of the period kept in the Süleymaniye Library.

The mosque is set parallel to the shoreline, on the northwest-southeast axis. The L-shaped market, adjoined by a cemetery and a tomb to the east, defines a large courtyard on the hillside. Walls that separate the mosque from the lower docklands on the seaside, until their demolition in the nineteenth century, joined the market at either end to enclose an irregularly shaped precinct. Elevated above sea-level on a substructure of wooden pilings similar to the one used at the Büyükçekmece Bridge, the precinct was entered from five gates and gave access to all the subsidiary structures with the exception of the market, which was primarily entered from the street.

With the construction of the Galata Bridge in 1845 and the demolition of the precinct walls, a vibrant square emerged at the waterfront with commercial buildings built along the mosque. The Eminönü square was crossed by tramlines connecting the two sides of the Golden Horn and remained a transportation hub even after its buildings were demolished in the early Republican period to reveal the mosque. First used as an open-air bus terminal, the square largely disappeared through widening of the coastal highway in 1956 and the construction of a higway interchange in 1986 that permanently cut off the mosque from the waterfront.

The mosque courtyard is entered through three portals, one on each side, that are preceded by cascading set of steps. Slightly smaller than the mosque, the rectangular courtyard is enveloped by an arcade on three sides that meets the mosque portico to the southeast; a total of twenty-four domed bays carried on twenty columns. It has two tiers of windows at regular intervals that continue along the portico façade. At the center, is the marble ablution fountain: an octagonal basin enclosed with grilled windows between eight columns that hold up a small dome. Its marble surfaces are richly carved with floral arabesques. Tile panels have been used to decorate the lower sections of the portico façade, which has a mihrab niche and a balcony on either side of the mosque entrance.

The mosque has a plan similar to the Şehzade Mosque built half a century earlier by Mimar Sinan. Its rectangular prayer hall is covered by a large dome at its highest that is carried on pendentives with four grand arches elevated on four colossal piers. The dome is surrounded by four semi-domes, which in turn rest on three small semi-domes (longitudinal axis) or two semi-domes separated by an arch. Four independent domes cover the corners. The small semi-domes, or exedra semi-domes, help bring the upper structure down to the exterior walls except to the northwest, where the wall has been pushed outwards to make space for an internal arcade that houses the women's section at the back of the congregation.

Here, the semi-domes are carried on two smaller piers and two columns that reach the walls and the main piers with arches. The main piers also reach out to buttresses along the exterior walls by means of eight low arches that hang over the internal arcade as it wraps the mosque interior on three sides, ending at the qibla wall. The qibla end of the northeast gallery has been sectioned off to create the sultan's lodge, which is accessed through the sultan's kiosk outside the mosque. There is a marble muezzin's platform adjoining the western pier. Three tiers of windows, in addition to windows at the bases of domes and semi-domes, illuminate the interior.

The late classical period decoration of the interior is dominated by blue and turquoise colored tiles that line the surfaces of the walls, arcades and the piers up to the level of the third windows. Painted arabesques with dominant hues of blue, red and green cover the remaining surfaces of walls, arches and vaulting. A multi-tiered muqarnas cornice braces the structure at the springing of the dome arches, merging with muqarnas pendentives of the exedra semi-domes on its way. There is a lesser cornice below the third windows that is highlighted with gold paint on the piers. The stone carving of the mihrab and the minbar are of note, as well as the mother-of-pearl woodwork of the preacher's pulpit, windowpane and doors.

On the exterior, the ensemble is flanked on either side by a double-story arcade made up of alternating wide and narrow arches and marble balustrades. The arcade is covered with a slanting roof with wide eaves below the third tier of windows, and consists of three sections separated by protruding buttresses. The first section is a single story portico composed of three tall bays and abuts the base of the minaret near the courtyard wall. Reached by a cascading set of steps, the portico gives access to the mosque side entrance and the minaret steps on both sides of the mosque.

The third section of the northeast arcade is a private entryway for the sultan's kiosk protected with richly carved marble gates. There are additional ablution spigots along the basement walls of both arcades. Above, the pyramidal composition of domes and semi-domes is dominated by thick dome buttresses and their balancing turrets. The two minarets, located between the side entrances of the mosque and the courtyard, have three balconies of diminishing size that are adorned with muqarnas pendants and carved balustrades. The mosque was restored by the Directorate of Religious Endowments in 1936.

The Sultan's Kiosk
The Sultan's kiosk is elevated above a vaulted passageway at the eastern corner of the mosque, resting on a watchtower that was once part of the city walls. It is a rectangular apartment composed of a wide corridor with that gives access to two rooms and an iwan that face the Golden Horn to the north. The rooms are equipped by furnaces and have a common lavatory between them. A long ramp, attached to the back of the kiosk, allowed the sultan to accede on his horse and a short passage at the end of the corridor lead into the sultan's lodge inside the mosque. Five stores have been carved into the space underneath the ramp.

On the exterior, the kiosk is picturesque with its projecting sections carried on carved consoles and its wide eaves that shade its simple brick and stone walls. It is equally known for the exquisite decoration of its interior. Sixteenth century Iznik tiles, arranged into large floral panels, cover the walls from the ground to the ceiling. A band of inscriptive tiles separate the two tiers of windows that illuminate its tall interior. The arched top windows feature arabesques of colored glass inside the two rooms and mother-of-pearl has been used to decorate the doors and the wooden panes of casements. The painted wooden dome of the large corner room, hidden under the flat roof of the kiosk, is one of the few remaining of its kind.

The Tomb of Turhan Hatice Sultan
The tomb is sits inside the walled-in cemetery that adjoins the market to the south of the mosque. It is a large domed room with a three-bay portico to the northeast and a vaulted room that projects southwest, and houses the graves of Turhan Hatice Sultan, Sultan Osman III (1618-1622), Sultan Mehmed IV (1648-1687), Sultan Mustafa II (1695-1703), Sultan Ahmed III (1703-1730) and Sultan Mahmud I (1730-1754), as well as numerous members of the royal family. Three tiers of windows illuminate the interior, which is decorated with floral tiles crowned by an inscriptive tile band above the lower casements. Its painted decoration was revised in 1959 based on the original motifs revealed under plasterwork of later periods.

Two smaller tombs, named Havatin and Cedid Havatin, were added to the northwest of the tomb in the nineteenth century. A small library, built by Sultan Ahmed I (1589-1617), adjoins the portico. The southeast precinct gate was torn down in 1904 along with the Quranic school (sibyan mektebi) and the room for Quran readers (darülkurra) to accommodate a bank headquarters. The sabil remains among office buildings to the southeast of the mosque.

These scripts and photographs are registered under © Copyright 2018, respected writers and photographers from the internet. All Rights Reserved.
Posted by ISTANBUL, Extended On Two Continents at 4:26 AM