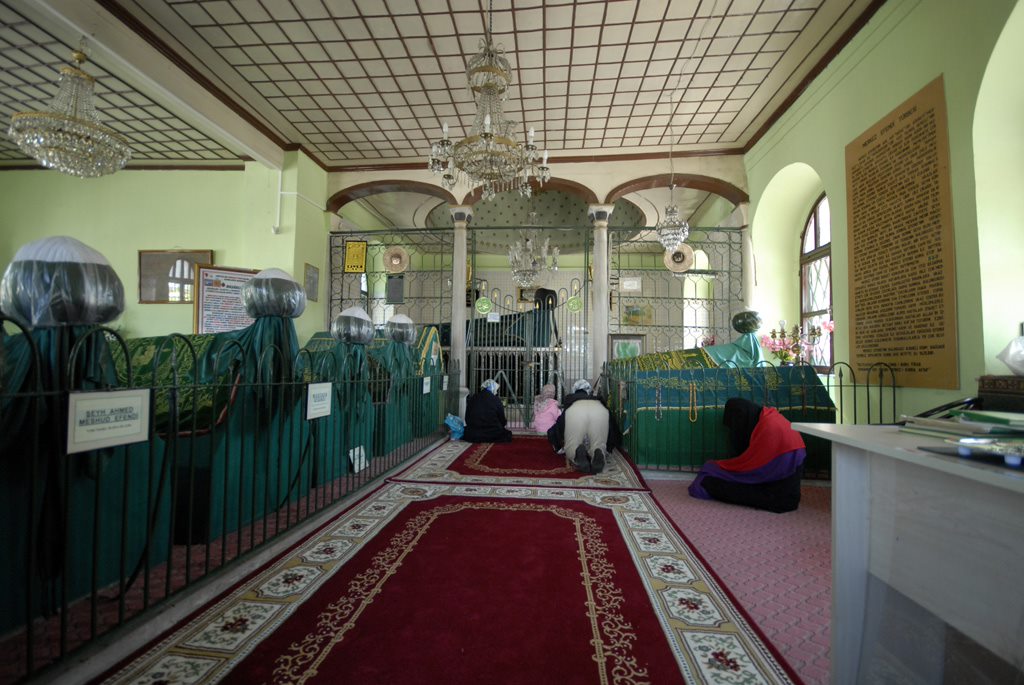 Merkezefendi Mosque dates back to 1580 and was once part of a large complex but many of the buildings have since been lost.  It was built with the assistance of Şah Sultan, a daughter of Sultan Selim II.  It underwent a complete makeover in 1837 and inside the stone exterior there is a lovely wooden interior that has a curtained mihrab painted on the back wall. Merkez Efendi was famous for his strength as well as for inventing mesir paste and having served as a doctor.

The Merkez Efendi Mosque was built on the site of a dervish lodge which had been commissioned by Süleyman the Great and built by the architect Sinan in 1517. After the death of Merkez Efendi, the mosque that bears his name was built in his memory between 1552-1572.

According to another story, the mosque’s construction began in 1580 and it opened to worshipers in 1582. Restored during the reign of Sultan Mahmud II, the mosque still bears many of the features of the original.

Built on a rectangular plan, the mosque is made of stone. Its door and windows were made from round brick arches The tomb of Merkez Efendi and his family, a public fountain, a cistern to supply water to the mosque, and the çilehane are all found in the mosque’s wide courtyard.

The wooden mansion on the right used to be the harem building of the Merkezefendi complex. It has been restored and will most likely be used to hold cultural activities in the future. There are other aspects of the square that captivated us upon first sight such as its popular grilled meat restaurant, a Turkish bath waiting to be restored and some wooden mansions. Yet the cultural valley does not only comprise this square.

The beautiful Abdülbaki Paşa Library (Neyhane) can be found just outside of the gate; the mosque was originally a primary school and was then used as a storage facility until its restoration in 2007.

Today you will find a tearoom, a library and a cultural centre with lovely painted panels reworked on the domed ceiling.  Close by is a large wooden mansion the Merkezefendi Konağı or Mansion that was restored in 2009.

Tomb
The tomb of Merkez Efendi (1463-1552) is attached to the mosque and where many pilgrims still visit today. Süleyman the Great frequently visited his tomb which is located in the mosque’s courtyard.

Çilehane
Next to the tomb is a çilehane built in keeping with the beliefs and traditions of Merkez Efendi’s sect. Merkez Efendi was said to gone here to isolate himself from the world.

Cemetery
The Merkezefendi Cemetery (Turkish: Merkezefendi Mezarlığı) is a burial ground situated in Merkezefendi neighborhood of Zeytinburnu district on the European part of Istanbul, Turkey.
Many renowned intellectuals, writers and artists rest in this old cemetery covering an area of 27,800 m2 (299,000 sq ft). In 2007, the cemetery was fully renovated. Currently, burials are allowed only for the members of families with existing graves

These scripts and photographs are registered under © Copyright 2018, respected writers and photographers from the internet. All Rights Reserved.
Posted by ISTANBUL, Extended On Two Continents at 5:43 AM