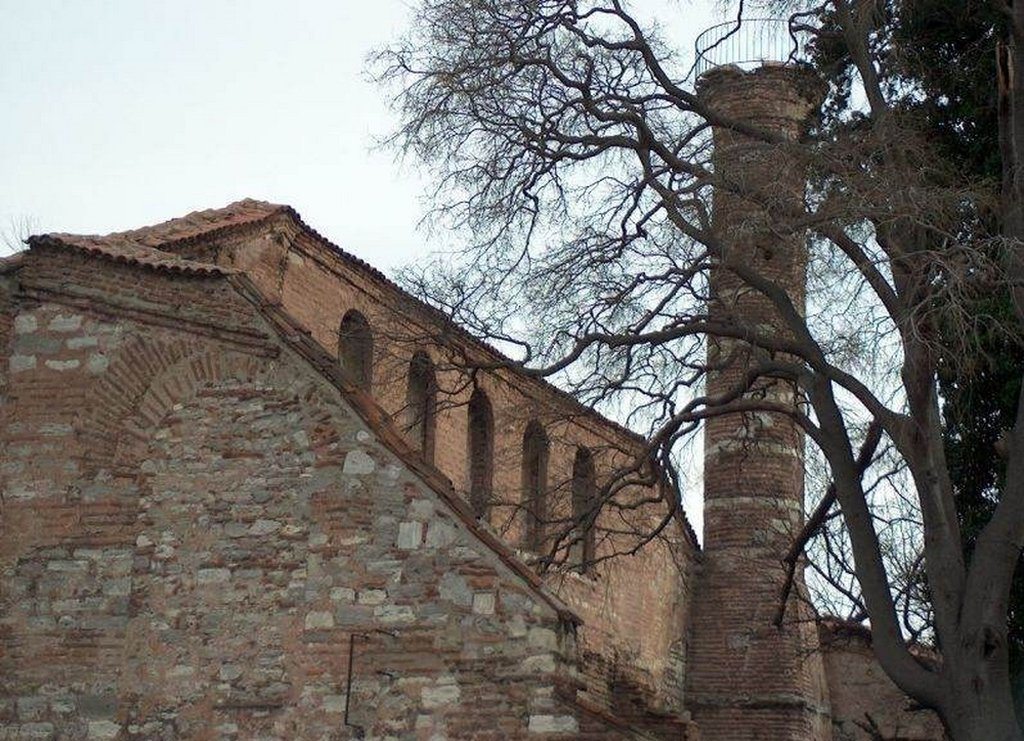 Studios Monastery (Imrahor / Emir Ahir Mosque): Situated on Yedikule Imam Aşir Street, Studios (Imrahor, Emir Ahır Mosque) is the oldest apparent religious structure in İstanbul. The Monastery of Stoudios, more fully Monastery of Saint John the Forerunner "at Stoudios", often shortened to Stoudios, Studion, or Stoudion, (Latin: Studium), was historically the most important monastery of Constantinople (modern-day Istanbul), the capital of the Byzantine Empire. The residents of the monastery were referred to as Stoudites (or Studites).

Although the monastery has been derelict for half a millennium, the laws and customs of the Stoudion were taken as models by the monks of Mount Athos and of many other monasteries of the Orthodox world; even today they have influence. The ruins of the monastery are situated not far from the Propontis (Marmara Sea) in the section of the city called Psamathia, today's Koca Mustafa Paşa. It was founded in 462 by the consul Stoudios (Latin: Studius), a Roman patrician who had settled in Constantinople, and was consecrated to Saint John the Baptist. Its first monks came from the monastery of Acoemetae.

With three naves and a gallery, Ayios Ioannes (John the Baptist) church was completed between 454 and 463. Having been represented in the seventh ecumenical in spite of the compulsions in 787 demonstrates that the monastery, which was closed because of iconoclast influence in 754 and whose hermits were sent to exile, was still strong and functioning. During the Abbacy period of the priest Theodore between in years 798 and 826, the monastery became a dazzling centre of the Christian world.

The Stoudites gave the first proof of their devotion to the Orthodox Faith during the schism of Acacius (484-519); they also remained loyal during the storms of iconoclastic dispute in the eighth and ninth centuries. They were driven from the monastery and the city by Emperor Constantine V (r. 741-775); after his death however, some of them returned.

Hegumenos (abbot) Sabas of Stoudios zealously defended the Orthodox doctrines against the Iconoclasts at the Seventh Ecumenical Council in Nicaea (787). His successor was Theodore the Studite to whom the monastery owes most of its fame, and who especially fostered academic and spiritual study. During St. Theodore's administration also the monks were harassed and driven away several times, some of them being put to death.

At the same time, the number of priests reached 700 in parallel with the growth of the monastery. Archpriest Theodore did not approbate Emperor VI Archpriest Theodore, who returned along with other priests exiled in 812, supported the silent march of the priests carrying icons in 815 and this was the most important reason for him being eviled again. Theodore died in the Akritas Monastery in 826, to where he had been exiled.

Theodore's pupil, Naukratios, re-established discipline after the Iconoclastic dispute had come to an end. Hegumenos Nicholas (848-845 and 855-858) refused to recognize the Patriarch St. Photios and was on this account imprisoned in his own monastery. He was succeeded by five abbots who recognized the patriarch. The brilliant period of the Stoudios came to an end at this time.

In the middle of the eleventh century, during the administration of Abbot Simeon, a monk named Niketas Stethatos, a disciple of Symeon the New Theologian, criticized some customs of the Latin Church in two books which he wrote on the use of unleavened bread, the Sabbath, and the marriage of priests.

As regards the intellectual life of the monastery in other directions, it is especially celebrated for its famous school of calligraphy which was established by Theodore. The art of manuscript illumination was cultivated, with many brilliant products of the monastic scriptorium now residing in Venice, Vatican City, and Moscow.

In the eighth and eleventh centuries, the monastery was the centre of Byzantine religious poetry; a number of the hymns are still used in the Orthodox Church. Besides Theodore and Niketas, a number of other theological writers are known. Three of the Stoudite monks rose to become the ecumenical patriarchs; and three emperors - Michael V (r. 1041-1042), Michael VII Doukas (r. 1071-1078), and Isaac I Komnenos (r. 1057-1059) - took monastic vows in the Stoudion.

Theodore was buried to Büyükada. After the Iconoclast Period, Theodore was brought from Büyükada and buried in the Studios Monastery in 844. Emperor Michael V was arrested, blinded and castrated by a mob although he took refuge in the monastery in 1042. Emperor Isaac I in 1059 and Dukas VII in 1078 were cloistered in the monastery after they had abdicated. The head of John the Baptist, brought to the monastery in the 10th century, is one of the most important relics stolen during the Latin occupation.

The monastery, renovated by Emperor Konstantinus Palaiologos in 1293 after the Crusader destruction, remained effective during 14th and 15th centuries, and many books, which were copied, were sent to Russia. Kasım, son of Sultan Beyazıt, who was a guest in the Byzantine Palace, was buried in the monastery when he died during a plague disaster in 1417. It was written in some references that Prince Kasım converted to Christianity just before he died. The church was named after Imrahor İlyas Bey (Emir Ahır) after it was converted into a mosque in 1486.

In 1204, the monastery was destroyed by the Crusaders and was not fully restored until 1290, by Constantine Palaiologos. The Russian pilgrims Anthony (c. 1200) and Stephen (c. 1350) were amazed by the size of the monastic grounds. It is thought that the cloister sheltered as much as 700 monks at the time. The greater part of the monastery was again destroyed when the Turks conquered Constantinople in 1453.

The only part to survive into the 20th century was the Cathedral of St. John Baptist, probably the oldest remaining church in Istanbul, a 5th-century basilica which was converted by Sultan Bayezid II's equerry into the mosque İmrahor Camii (literally, Mosque of the Stablemaster). The ancient structure sustained grave damage from the great fires of 1782 and 1920; the 1894 Istanbul earthquake also contributed to its ruin.

In addition, Imrahor Ilyas Bey built a bath and shops as the foundation for the mosque in Langa. Nazperver Kadın, one of the harem treasurers of Sultan Selim III, repaired the damage caused by the Samatya fire dated 1782 between 1804 and 1805. The monastery, which was damaged during the earthquake of 1894 and whose dome collapsed in 1908, was abandoned after the fire of 1920. The bath in Langa, which was a foundation, was destroyed in 1923.

Following the earthquake, a group of Russian Byzantinist scholars, led by Fyodor Uspensky, opened the Russian Archaeological Institute on the monastery grounds, but its activity was suppressed in the wake of the Russian Revolution of 1917. During the subsequent decades, the ruins of the monastery complex were looted by local inhabitants to repair their houses, while the magnificent 13th century pavement still lies open to elements "and disappears slowly but steadily".

The monastery was destroyed as it had been used as a quarry during the 15th century for the construction within Topkapı Palace. Many documents and books were translated and protected in the monastery during centuries. Many chants of Orthodox Church were composed by Archpriest Theodore and his brother Patriarch Josephos of Salonika as well as the psalmody developed in Studios Monastery. The monks were called sleepless (akometoi) because of their conducting religious ceremonies day and night continuously.

Studios monastery where welcoming ceremonies were organized for Byzantine emperors after passing the Golden Gate. The first scientific studies regarding the monastery were undertaken by the Russian Archaeological Institute under A. Pancenko between in years 1908 and 1909.

In a move that has attracted significant criticism and controversy, the St John Stoudios (Imrahor) Monastery in Turkey, the largest Byzantine monastery in Istanbul, will be converted into a mosque and its name changed to the İmrahor İlyas Bey Mosque.

The Monastery of Stoudios, also known as the İmrahor Monument, was built in 462 AD and is one of the oldest surviving monasteries in the country.  Historically, it was the most important monastery of Constantinople (modern day Istanbul), the capital of the Eastern Roman Empire, and its laws and customs were used as models by the monks of Mount Athos in Greece and many other monasteries of the Orthodox world.

“I wouldn’t like to speak as a member of a council but my personal opinion is that cultural heritage shouldn’t be reflected as an antagonistic heritage. If we reflect it like this, it will damage societies on a macro level,” said Laki Vingas, acting as representatives of the Directorate General of Foundations. Vingas added: “My personal view is that when you are trying to create a new vision you should be careful not to create new problems for the future.”

The monastery is currently in a state of ruin and the conversion will take place after it is restored.  The renovation of the building, follows the same fate as that of other churches in Trabzon and İznik, which have already been turned into mosques. The conversion of a building from the worship of one religion to the worship of another religion has attracted significant controversy over the centuries.

Many believe that a place of worship should be retained for its original purpose and historical significance, while others maintain that if a building is in ruin and unused it is better to be restored and used for another religion than to be left to rot. The conversion of non-Muslim places of worship into mosques occurred primarily during the life of Muhammad and continued during subsequent Islamic conquests and under historical Muslim rule.

The cistern with 24 granite columns, erected in 463, near to the church, measures 26 x 19 meters. The distance between the cistern’s columns is 3.9 - 3.45 meters. The wall thickness is 1.6 meters and its vaults collapsed during the earthquake of 1894. The holy spring, close to the cistern, measures 5.2 x 7.45 meters and it is now used as a workshop.

As a result, numerous Hindu temples, churches, synagogues, the Parthenon and Zoroastrian temples were converted into mosques. Several such mosques in Muslim or ex-Muslim lands have since reverted or become museums, such as the Hagia Sophia in Turkey and numerous mosques in Spain. However, Muslims are not the only ones to carry out such conversions. There were many occasions of non-Christian places of worship being converted into churches in the early history of Christianity, which continued during subsequent Christian conquests and Christianization, many involving the destruction of pagan temples.

These scripts and photographs are registered under © Copyright 2018, respected writers and photographers from the internet. All Rights Reserved.
Posted by ISTANBUL, Extended On Two Continents at 3:16 AM