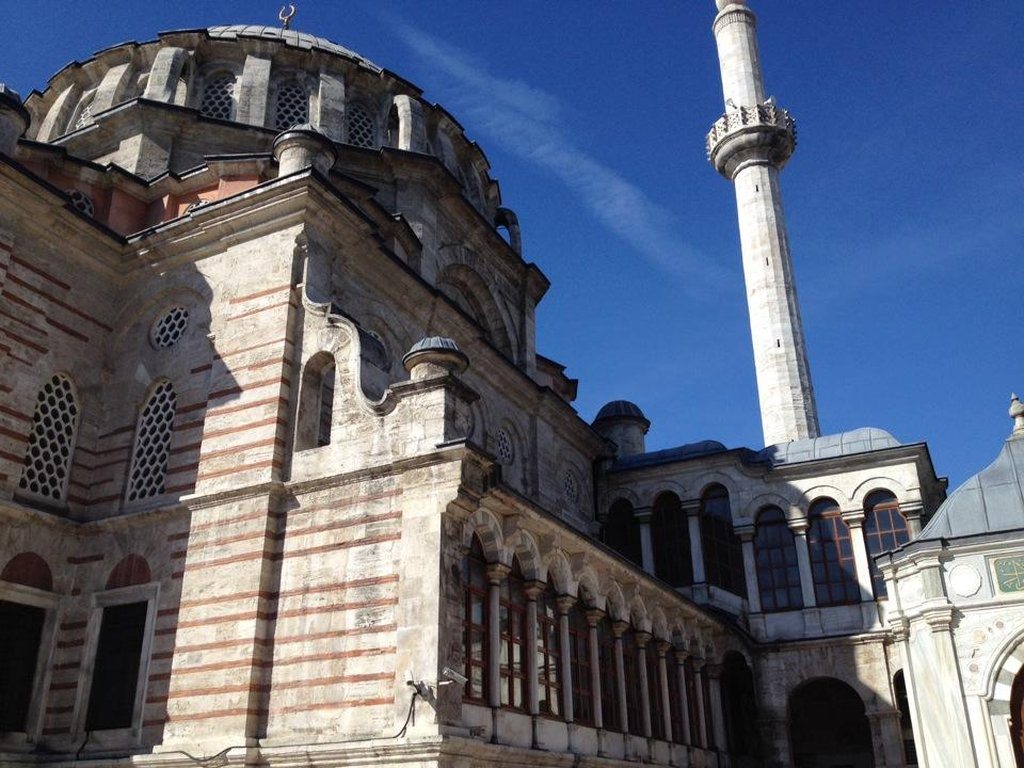 The complex is located in the Laleli neighbourhood of Eminönü at the intersection of Ordu Street and Fethi Bey Street. It was built by Sultan Mustafa III between 1760-1763, and the architect is thought to have been either Mehmed Tahir Ağa or Hacı Ahmed Ağa. The complex is made up of a mosque, a soup kitchen, a public fountain, a fountain with a spout, a mausoleum, an inn and a medresse. The mosque forms the centre of the complex. The substructure of the mosque functions as both a basement and a courtyard. The courtyard is above ground level and accessible by steps.

The Laleli mosque is located in the centre of this raised courtyard. It is one of the finest examples of 18th century Ottoman architect. The 24-window main dome is supported by three half domes located at the entrance and kiblah, or direction toward Mecca. There are two minarets each with a single gallery. The alem, or decorative metal device atop the minarets, are especially unusual. The mosque was designed in the Baroque style and is illuminated by 105 windows. The interior walls are covered with coloured porphyry marble.

The fountain and mausoleum of the complex are located on the corner of Ordu Street on the Aksaray side. The front tombs contain the remains of Sultan Mustafa III and Sultan Selim III. Next to them are the tombs of the Haseki Sultans. The inn of the complex is located to the north of the mosque on Fethi Bey Street and is still used as a market. The basement of the mosque, which was not originally used for commercial purposes, also serves as a marketplace today. The medresse of the complex has not survived to the present day.

The Laleli Complex was built between 1760 and 1763 by Sultan Mustafa III (1754-1757). It is the last royal complex to be built in Istanbul and follows the Ottoman baroque convention established at the Nuruosmaniye Complex built a decade earlier. Most scholars attribute this monument to Mehmed Tahir Ağa, while others have suggested a role for head-architect Hacı Ahmed Ağa. The word "Lale", in Turkish, is a tulip. The name Laleli, which the complex shares with its neighborhood, is thought to either refer to a local saint named Laleli Baba whose tomb stood near the mosque until the mid 1950's or the Laleli Fountain, which is mentioned in 18th century sources.

The complex consists of a mosque (cami), madrasa (medrese), soup-kitchen (imaret), fountain (çeşme), sabil, tombs (türbe), a room for the timekeeper of the mosque (muvakkithane), housing for the imam and muezzin and a han and stores built as an endowment for the religious foundation. The nearby Çukurcuma baths, although built earlier, are often considered a part of the Laleli complex. The mosque and soup kitchen are located inside a rectangular walled-in precinct that is raised considerably above the street level on a tall basement.

The precinct is entered through two main gates located at the two southern corners facing Ordu Street. Both gates are vaulted and open into ramps that lead up to the precinct level. The mosque is placed diagonally inside the precinct, with its qibla wall facing the southeast gate. The soup-kitchen is sited to its northwest. Flanking the southwest gate are the sabil and the Tomb of Sultan Mahmud III and Sultan Selim III, both of which are incorporated into the walls of the cemetery located at street level to the west of the raised precinct.

Oriented along the northwest-southeast axis, the mosque has of a square prayer hall and a rectangular courtyard about twice its size that precedes it to the northwest. The courtyard is enveloped by a continuous arcade composed of eighteen domed bays five of which form the mosque portico and has an ablution fountain at its center. It is entered through a main portal to the northwest, in axis with the mosque entrance, and two side entrances that flank the portico. The portal leading into the prayer hall is located at the center of the portico and bears an inscriptive plaque referring to the 1783 restoration. The Laleli complex was restored thoroughly after a fire in 1783.

A fire swept the neighborhood in 1911, destroying the madrasa, which was located on a side street to the east of the complex. What remained of the madrasa and the 18th century residential neighborhood was demolished in 1918 and development followed a newly established orthogonal street pattern. The monument's original context was disrupted a second time in 1956, during the enlargement of the highway to its south, when the precinct wall and gates were moved further north and new stores were built along its southern wall. Since then, Laleli has been gradually transformed from a residential to a touristic neighborhood that is centered on international trade.

The prayer hall is square, capped with a dome carried on eight tall columns that form an octagon in plan. The square hall is extended by a three-bay narthex to the northwest and rectangular mihrab apse projecting to the southeast. Side arcades composed of twelve bays flank the whole on the exterior. The narthex gallery has two balconies projecting to the right and left of the entrance carried on marble pillars. The right balcony, protected by a gilt screen, is reserved for the sultan and is accessed primarily through an enclosed and gated ramp outside the mosque. The left balcony is the müezzin's lodge.

The dome of the Laleli mosque is 12.50 meters in diameter at a height of 24.50 meters, about half the size and height of the dome at Nuruosmaniye. It is carried on an octagonal drum made of eight arches, with semi-domes attached to the corner arches and larger semi-domes joining the arches above mihrab and the central bay of the narthex. The eight columns that carry the dome arches are engaged with the side walls, with the exception of the two at the narthex. At the corners, angular squinches provide transition from the square plan to the octagonal crown.

The interior of the prayer hall is well-lit with twenty-four windows in the dome, five windows in the large semi-domes and three in each of the small semi-domes. There are also casement windows at ground level that open into the side arcades, and a tier of arched windows above, topped by circular windows below the dome arches. All windows, with the exception of the casements, are made up of combinations of white and colored glass. In addition to sculptural elements such as pilasters and cornices that animate the prayer hall, the interior of the Laleli mosque is enlivened by the polychrome arrangement made of marble wall panels that reflect various shades of yellow, red and blue.

The mihrab and minbar are also made of precious marbles. On the exterior, the dome on its octagonal drum sits flatly on the large rectangular mass its understructure, which is crowned with large weight turrets at its corners. The baroque character is expressed with regularly spaced pilasters with spreading capitals that merge into the thick cornice that unites the prayer hall and the courtyard. Concave pilasters are also employed between the dome windows, among them eight curved buttresses.

Minarets
There are two minarets located at either end of the portico flanking the courtyard entrances; they have single balconies and stone caps. The left minaret was built about six years after the completion of the mosque. The construction is two courses of brick alternated with a single layer of cut stone, with the exception of the minarets and superstructure, which are made entirely of cut stone.

Inn
The Çukurçeşme or Sunken Fountain han is also called the Büyük Taş Han or big stone han. Its irregular plan manifests the constraints of the urban fabric at its time of construction. It has a long rectangular porticoed court that is entered through a long vaulted passage to the south; passages here lead into two smaller courtyards. The inn of the complex is located to the north of the mosque on Fethi Bey Street and is still used as a market. The basement of the mosque, which was not originally used for commercial purposes, also serves as a marketplace today.

The plan of this too is almost indescribable. We enter through a very long vaulted passage, with rooms and a small court leading from it, and emerge into a large courtyard, in the middle of which a ramp descends into what were once the stables. Around this porticoed courtyard open rooms of most irregular shape, and other passages lead to two additional small courts with even more irregular rooms! One seems to detect in this the ingenious but perverse mind of Mehmet Tahir Ağa. The han has now been restored and houses a restaurant and shops.

The Basement
The original function of the basement underneath the Laleli mosque is not known. Built of regularly spaced piers and covered with vaults, it remained enclosed until 1957, when its southern wall was torn down during highway expansion. It was then converted into an underground shopping plaza with a western entrance and a row of stores was added facing Ordu Street to the south. The underground plaza has a fountain at its center and is lit through large basement windows placed around the mosque walls.

The Tombs and Cemetery
The Tomb of Sultan Mustafa III and Sultan Selim III and the sabil are located along the cemetery wall to the west of the southwest precinct gate. In addition to Sultan Mustafa III, the tomb houses his mother Mihrişah Sultan, his son and later successor Sultan Selim III, his daughters Hibetullah and Fatma Sultans and Mihrimah Sultan. It is an octagonal building crowned with a dome and preceded by a portico to the north. Its exterior appearance is marked by wide corner pilasters and thick cornices that wrap the building between the two tiers of windows and below the recessed drum.

Sixteenth century tiles adorn the tomb on the interior crowned by a wide band of calligraphy that envelops the walls. A smaller tomb inside the cemetery houses the graves of the Sultan Mustafa III's favorites or Haseki Sultanlar. There is a third, open tomb dedicated to Adilşah Kadın; it is protected by an intricate bronze canopy.

Sabil
The sabil is raised on a circular base and has concave windows facing the street. Its windows are covered with bronze lattices that were originally gilt and the wide segments of its large eave resembles the petals of a flower.

These scripts and photographs are registered under © Copyright 2018, respected writers and photographers from the internet. All Rights Reserved.
Posted by ISTANBUL, Extended On Two Continents at 5:52 AM