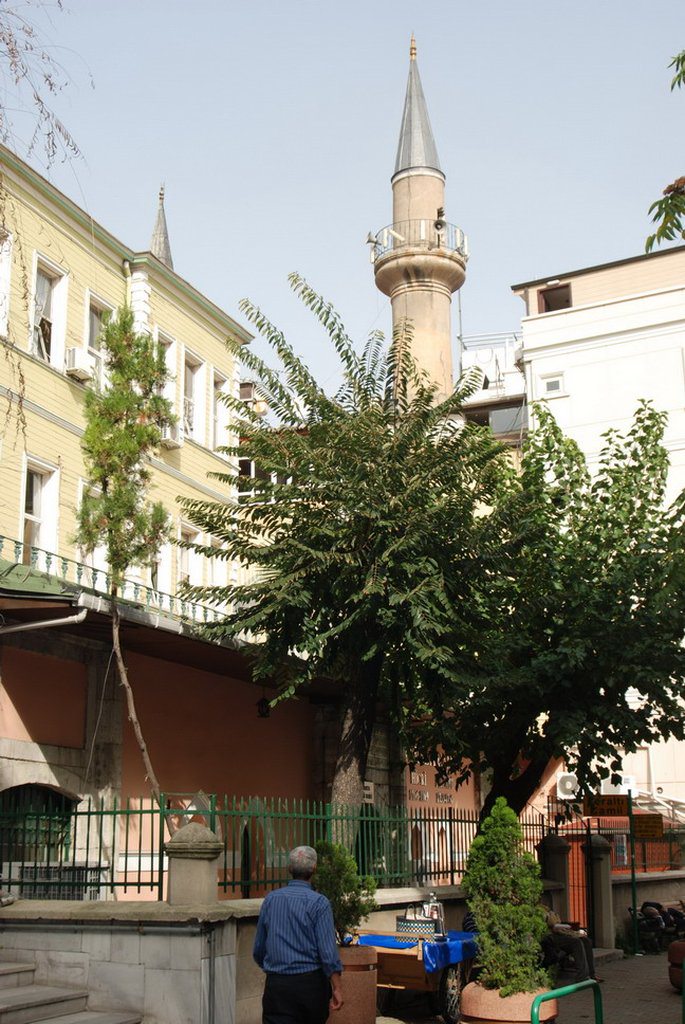 Yealtı Mosque (Kurşunlu Mahzen Camii) is a mosque that was constructed almost below the street level. It is located at the neighbourhood of Karaköy very close to the pier at the mouth of the Golden Horn. This quite unique structure suggests that the Yeraltı Cami had been part of what remained from the Galata Castle - presumably a large basement room, used as a cellar or a depot- that used to be located at the southern side of the Golden Horn right opposite to the walled city of Constantinople during the Byzantine period.

The Galata Castle used to hold one end of a huge chain all the way across the sea to the other side at the city walls, which was used by the Byzantines in order to prevent ships from entering the Golden Horn when the city was under siege. Part of that chain that has survived is being exhibited at the Archaeological Museum of Istanbul.

The Yeralti Mosque is the basement of a former Byzantine fortress. It was once a prison. The mosque appears tentatively at first from behind a nondescript facade on a busy street. Inside its walls, the ceiling hovers seven feet above the subterranean ground level and imposing rectangular columns obstruct and cut their own private nooks of worship. It is an anomaly in a culture of communal praying that appreciates the spiritual accommodations of open spaces. It has the constancy of a quiet, cavernous darkness.

Often called the Underground Mosque because it's buried beneath a 19th-century wooden mansion, the low, vaulted interior is supported by 54 columns, built on the remains of the Byzantine castle of Galata, which guarded the entrance to the Golden Horn.

From here, a great chain was stretched across the waterway, blocking access to enemy ships in times of siege. The upper part of the castle was demolished following the Ottoman conquest, and the remaining lower floor - formerly a prison - was converted to a mosque in 1757. Unlike any other mosque in the city, Yeralti Camii is housed underground in a crypt belonging to what was once The Castle of Galata. Entry to the Golden Horn was controlled from here during Byzantine times, and it is thought that the giant chain which prevented unwanted ships from passing through the waterway used to be anchored here.

According to the legend Sultan Mehmet II, the conqueror of Constantinople, used very large trees upon which he dragged his boats from land through the area of Galata in order to move his boats from the Bosporus Sea to the Golden Horn, bypassing the Byzantines’ chain.

During the Ottoman Period the abandoned castle was partially destroyed, until the mid seventeenth century when the tombs of two Arab sainted martyrs were revealed and Sultan Murat IV ordered the construction of the shrine in 1640 which finally was turned to a mosque in the following century. It said that the martyrs died there during the first siege of the city by the Arabs in the seventh century AD.

The building was converted into a mosque in 1757 by the Grand Vezir Köşe Mustafa Paşa. Inside, there are a series of columns supporting low vaulted ceilings to allow for private prayer space. The tombs of two Arab soldiers are situated in a side chapel, enclosed inside a glass case. The tombs of Abu Sufyan and Amiri Vahibi, who were believed to have died here as martyrs between 672 and 677 BC during the siege of İstanbul by the Arabs, are here.

The Yeraltı Cami is a quite unique structure and a rare kind of a mosque in Turkey. It has a low ceiling which stands on fifty four thick columns with low vaults, which divide the mosque in narrow passages and small praying places. The mihrab on the Eastern side of the mosque is not at the centre of the wall but right at the end of one of these smaller passages, something that adds to the exceptionality of the Yeraltı Cami.

Evliya Çelebi says the castle was damaged and some parts of it were destroyed during the reign of Beyazid II in an earthquake called "the Little Apocalypse". It is not known whether his statements are true but it is a known fact that the castle / Mahzen-i Sultani (the Imperial Granary) is not depicted in neither of the drawings of Matrakçı Nasuhi dated 1573 and nor in Hünername dating back 1584.

Registered under the name of "the Lead-covered Store" in the official records of the 15th and 16th centuries, we also find out that remaining part of the castle was once used as the Grand Customs Office. The building, which most probably served as the warehouse for the imported goods brought to the city were stored and traded, was subsequently renewed with the removal of the new customs office on its place.

The Lead-covered Granary Pavilion, one of the most beautiful sights of the Turkish civilian architecture, is the Customs Office which was constructed on the grounds of the larger bastion of the castle. The engraving by John Lewis dated 1836 brings back the sensational sight of the pavilion to us. There is also another picture taken from the Tower of Galata showing the back side of the Lead-covered Granary Pavilion.

The multi-footed granary situated at the basement floor level of the Lead-covered Granary Pavilion, which was constructed on the remainings of the tower section, is also the source of a legend. After a war in 714 AD, some high officials of the Ummayan Dynasty became martyr around the granary during the siege and were buried there along with Müslime / Mesleme, the commender-in-chief to the army, and, rumour has it that the gate of that section was closed down with a lead-cast seal while the army was marching back to Damascus.

It is probably becouse of this rumour that the building became known as "the Leaded Granary" by public, although it was documented under "Mahsen-i Sultani", the Imperial Granary, in the official records. It is also among many other rumours that the graves of these Sahabes (the companions related by blood to the Prophet Muhammed) were ascertained in a dream by a Nakhshibendi Sheik, and thus recognized as a Holy Place in 17th century.

During the Ottoman Period the abandoned castle was partially destroyed, until the mid seventeenth century when the tombs of two Arab sainted martyrs were revealed and Sultan Murat IV ordered the construction of the shrine which finally was turned to a mosque in the following century. It said that the martyrs died there during the first siege of the city by the Arabs in the seventh century AD.

Although Sultan Murad IV (1623-1640) projected a mosque just next to the graves, it was never carried out. About a century later, Köse Mustafa Bahir Paşa of Çorlu had the granary building cleaned and reorganized to serve as a mosque. It is due to this fact that the mosque was presented as though it had been granted by Sultan Mahmud I in the long inscribed stone panel over the gate dating H. 1166 (1752 AD).

We see that the cone-shaped minaret underwent some particular changes within years, yet we still do not know from which date on it was called "the Underground Mosque". In a photograph dating 1854, the minaret which appears in a long and thin lead conical shape, looks in a fairly different shape in another photograph taken in 1868. Renovated begining from the şerefe (narrow, circular balcony surrounding a minaret), the wooden stilts and hanging fringes of its şerefe present a unique sight to us.

The former lead-cone was replaced with a maceshaped hood. We see in a latter photograph taken in early 1900s that the hood was once again changed with a relatively smaller, stubby lead cone. Considering the various sights of the minaret, it can be said that the building often underwent some repairs and changes within years. Situated on the same level with Kemeraltı Caddesi and supporting a two storey wooden building used as the General Health Directorate of Boundries and Coasts, the Underground Mosque has an orderly rectangular plan.

It is hard to have an idea about the exterior of the mosque as it was surrounded by some various buildings. Even the minaret is hardly seen because of the neighbouring tall buildings. The entrance to the building is on the facade looking to Kemeraltı Caddesi. The main entrance gate with a space is situated in the central axis of the building; the last open space on the left side of the facade is mainly used for entries.

A niche is placed ahead of the window just on the left side of the main entrance, and, to the left of it on the end space is located a small, lowered wooden pulpit. Daylight gets into the mosque through these three windows on this facade and the entrance door was fitted up later on. The other two entrances to the mosque open up presently to Karantina Sokak and they are the doors that are used by climbing the stairs inside the building. Independently built in the shape of squared-sections from the walls are there 45 steps covered with cross pendentives.

It is almost impossible to comprehend the overall space of the mosque due to the fact that the interior is almost as big as the size of the pedestals. Inside the mosque are three holy persons, tombs, attributed namely to Amr Bin As (573-663), Vehb Bin Hüseyre and Süfyan Bin Üyeyne. Süfyan Bin Üyeyne lies in the main section facing the south of the mosque where a small open space is serving as an entrance; Amr Bin As and Vehb Bin Hüseyre lie side by side in the space adjoining the south wing section of the building and leading to Karantina Sokak.

Renovated recently, the mosque presents a spatial dissimilarity with the other mosques in our heritage. Being one of the most beautiful examples of utilizing a 1500 years old castle remained from a fortrees and conforming it to your own belief in harmony, the Underground Mosquee is one of the most original buildings that must seen by us all.

On the right side as we enter the mosque from the northern entrance are located the two tombs of the Arab martyrs. The interior of the mosque is not decorated and the columns are painted with a plain white colour. However, the low light of the mosque combined with its unique structure creates a very interesting atmosphere.

These scripts and photographs are registered under © Copyright 2018, respected writers and photographers from the internet. All Rights Reserved.
Posted by ISTANBUL, Extended On Two Continents at 3:10 AM