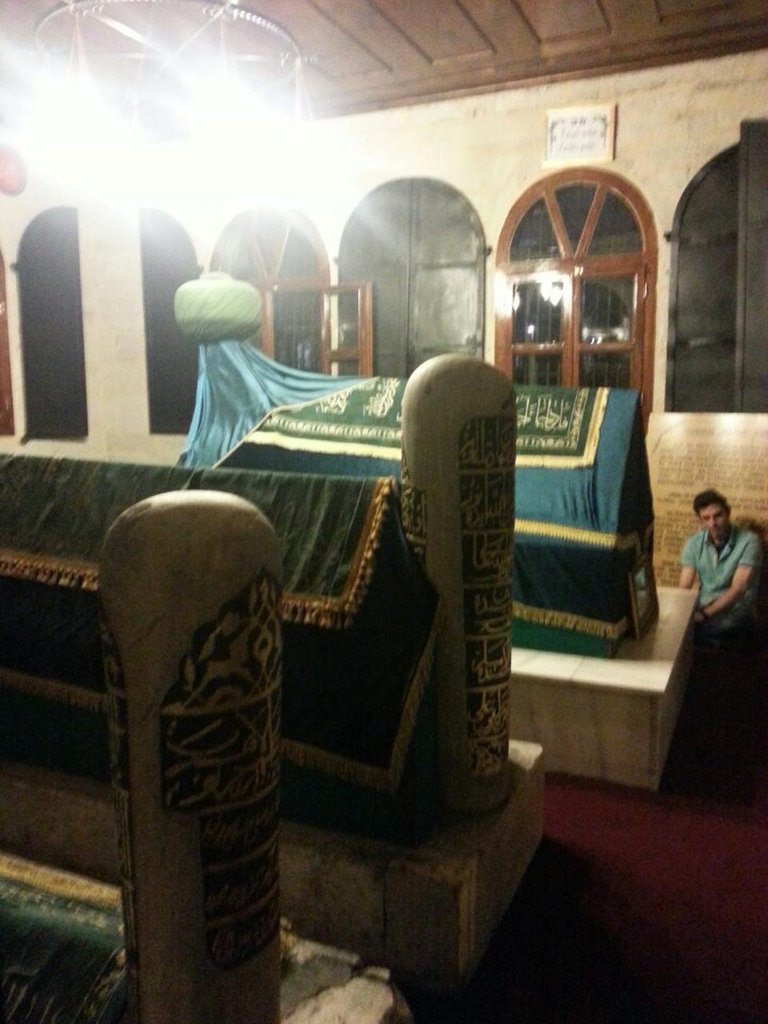 Yâvedûd Mosque is also known as Abdülvedûd Mosque or Hatice Sultan Mosque. It is located in the Yâvedûd Avenue on the right hand side of the Haliç Bridge. It comprises the area between Ayvansaray and Defterdar.

It was built by eş-Şeyh Abdülvedûd. While being among the Buhara Soldiers during the siege of Istanbul and then moving to Ayasofya after the conquest, he had a small mosque (mescid) and a small dervish lodge (zaviye) built outside of the Ayvansaray, and then was buried in the location around the lodge with the order of Fâtih Sultan Mehmed Hân.

As the mescid became neglected in the course of time, it was rebuilt by Hatice Sultan, the daughter of Sultan Mehmed IV in 1711. For this reason, this mosque is also known as the Sultan Mosque. In the basement of the temple made of hewn stone, there are four earthen anonymous graves. The mosque part of the building was made of wood. The base of the minaret, its cube and the basement dates back to earlier times. Although there are no people residing around the mosque, the temple is still open for public worship.

The focus point of this neighbourhood is a masjid built during the reign of Sultan Mehmed the Conqueror by Sheikh Abdülvedûd Efendi (Yavedûd Sultan) who hailed from Bukhara or Damascus, participated in the conquest of Istanbul, and died in 1455. The masjid is located just outside the Ayvansaray Gate, on Yâ-Vedûd Street on the shore of the Golden Horn.

Among the people who provide us with information concerning this building we have also Evliya Çelebi, who after having narrated in anepic style the life of Yavedûd Sultan in his Seyahatnâme (Travelogue), describes also the place where he is buried.

According to another source, namely the Hadika, “...Its founder is the Venerable Sheikh Abd’ül-Vedûd. While this saintly person from Bukhara, who had participated in the siege of Istanbul, was living some where near Saint Sophia, he had a mosque and a dervish lodge built just outside Ayvansaray. When he died, the War Veteran and Sovereign Sultan Mehmed the Conqueror ordered that he be buried near this dervish lodge. It was the year 860 (1459)...”

From this we understand that Yavedûd Sultan had a masjid and dervish lodge built and that he was buried in or very near this architectural ensemble. Since, as the years went by and the mosque gradually fell into a state of utter disrepair, Hatice Sultan, daughter of Sultan Mehmed IV, had it repaired with the addition of a minber (pulpit) in 1151 (1738). According to the inscription over the door, the building was repaired once more and inaugurated on 5th Cemaziyelahir 1219 (11 September 1804), with the addition of a wooden section.

The wooden section having burned down in a fire in 1965, the General Directorate of religious Foundations had it rebuilt. During the construction of the bridge over the Golden Horn, the building was moved away from the mausoleum, to the site where it stands at present. The masjid has a ground floor made up of alternately coloured stones, over which awooden section was added.

The access to the building is through an entrance over which there is a lean to roof and which has iron railings on its two sides. After having gone up a few marble covered steps one enters a rectangular entrance hall and from there, through a wooden double-winged door, into the mosque proper. The main part has a quasi square shape and just in front of the door there is the mihrab (a niche in the mosque indicating the direction of Mecca) and a little to the right the wooden minber.

On the north side, just over the entrance there is the wooden women’s section. Due to recent renovations, the interior does not have its original decorations. The building’s interior is lighted by means of five rectangular framed windows on the western side and by one each on the southern and eastern sides.Over the rectangular windows there are round windows. A door on the right side of the entrance hall leads to the basement level, where there are four tombs, only one of which has an inscription on it that says “Mehmet Bin Abdullah 1097 (1685)”.

Due to the fact that the elevation of the road increased in 1972, when the bridge and the connecting roads were built, only the pointed brick arches of the three basement windows on the western side and of the two on the southern side are still visible nowadays. The minaretis located on the northwestern corner, at thepoint where the wooden part of the main sectionof the mosque begins.

The fact that the south-western corner of the stone basement has been bevelled is another characteristic of this building. In the enclosed space in front of the masjid there is the mausoleum of the founder, made of sandstone, square and with nine windows. In 1324 (1906) a fountain was added to the space infront of the mausoleum. Although there are no people residing around the mosque, the temple is still open for public worship.

These scripts and photographs are registered under © Copyright 2018, respected writers and photographers from the internet. All Rights Reserved.
Posted by ISTANBUL, Extended On Two Continents at 3:14 AM