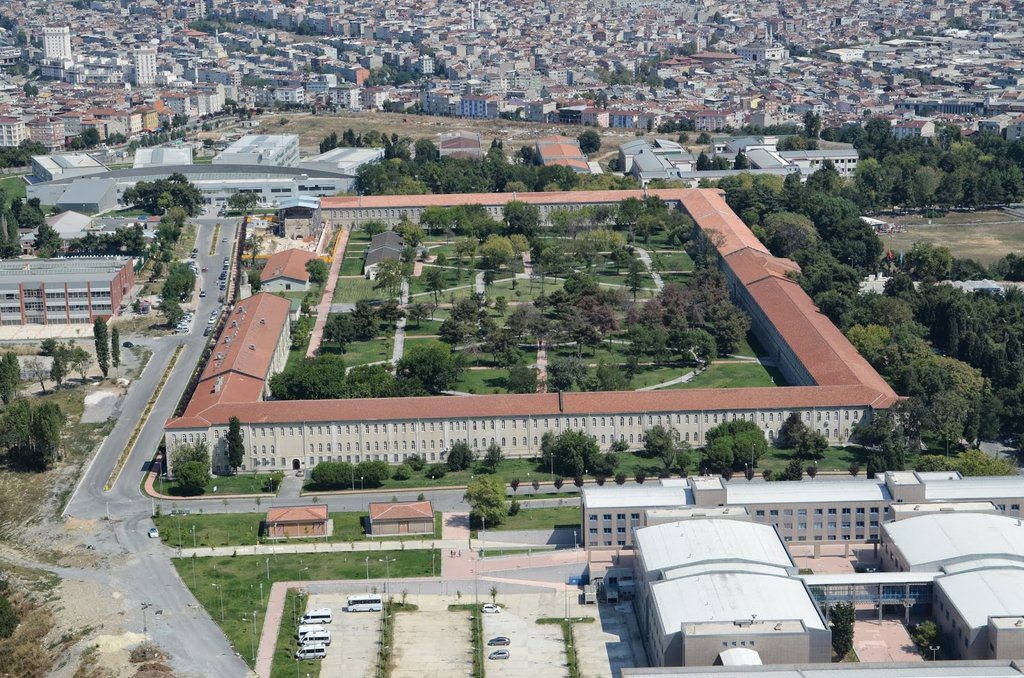 It is said that the history of the military settlement in the area where the old Davutpaşa Military Barracks used to be goes back to the Byzantine era, and that the army camped here during the conquest of Istanbul and the imperial tent of Sultan Mehmed was set up here. The Davutpaşa Barracks retained their original function until modern times, when in 1999 their military duty was annulled and they were assigned to YıldızTechnical University.

Sultan Mehmed the Conqueror encamped in the field where Davutpaşa and Maltepe military barracks are located today with his army consists of 12,000 Janissaries and 4,000 Sipahis during the Siege of Constantinople. The location of Davutpaşa military barracks that is one of the highest places outside of the İstanbul City Walls had evaluated in the form of military sites since the period of Sultan Mehmet the Conqueror.

Waterway, remains of cistern and vault pieces remained from a stone building brings the idea that this region might have been used as military site also in the Byzantine period into minds. Selimiye military barracks in Anatolian side of İstanbul and Davutpaşa military barracks in the European side of İstanbul have a real state of military site among the communities of military structures during the periods of west warding and reforms.

The Ottoman armies were sent off from Davutpaşa Field when they are going to the European side. If the sultan campaigns as the head of the army, armies were starting their campaign on the next day. If the army was in the management of the vizier, then the sultan was saying farewell to the army at that field. Davutpaşa Field was the final overnight stay and farewell place for the sultan and the final accommodation place for the army which returns from campaign.

Two mansions had been built in Davutpaşa where was accepted to be important for the army and beaten track for sultan. The first mansion had been constructed by Davud Pasha who was the vizier of Sultan Bayezid II and the governor of Sultan Mehmet the Conqueror and there were some other buildings as well as this sultan's mansion. The reason that this place's name is Davutpaşa takes its source from that vizier.

Military barracks have been built in three places which are peak-shaped at this very important part of İstanbul outside of the city walls and on the way of Thrace (in the Davutpaşa Field). These were Davutpaşa, Rami and Maltepe military barracks. Two of these military barracks are not longer used with this purpose. Rami military barrack are about to be destroyed completely. Maltepe building was handed over to police force.

Sultan Mahmud II made the Head of Ebniye-i Hassa to prepare a cost estimate report for the construction costs of the new military barracks which would be constructed there and the repair costs for them which need repair.

Various basic needs were tried to be met in the military barracks of the period of reforms. For example, the need of places of worship was met by building mosques or majids in these barracks. Health problems that is the most important and vital issue was solved by building hospital departments in these military barracks. Indeed, the issue of hospital was among the vital issues during the years following the opening of the Tıbbiye in 1827. The doctors who had been educated in the Tıbbiye were appointed to these hospitals within the body of military barracks.

Davutpaşa Barracks were repaired time to time during the Imperial period. The destroyed roof of the barracks on the date of Ramadan 5th, 1260 (September 18th, 1844) because of the storm and some other parts which need repair was repaired by Haci Ali Efendi, the repair official as the result of cost estimate report of Abdülhalim Efendi who was one of the master builders of Ebniye-i Hassa as a result of suggestion of Ali Rıza Pasha who was one of the army brigadiers.

The final large-scale repairement of Davutpaşa and Rami military barracks was made in the building in Maltepe during the Ottoman period in 1892. The barracks was about to come down in the world in the beginning of the 20th century. Immigrants were settled here during the Balkan Wars. Davutpaşa Military Barracks was repaired and used as a barracks during the Republican period (1926-1930), too.

At the end, in the year of 1999, the building was decided not to be used as military barracks after that time. Davutpaşa barracks buildings which were the most important military space of İstanbul until the end of the year of 1999 has been made over to Yıldız Technical University.

Our mission is to create a university which pioneers education, scientific research, technological development and artistic work aimed at the progress of society and the increase of the quality of life within an understanding of national and international solidarity; and educates creative, enterprising, questioning and ethical students equipped with universal values, who constantly renew themselves, aim for lifelong learning and are capable of analysis and synthesis. Our vision is to become one of the most-preferred world universities with our educational, research and cultural environment.

These scripts and photographs are registered under © Copyright 2018, respected writers and photographers from the internet. All Rights Reserved.
Posted by ISTANBUL, Extended On Two Continents at 6:13 PM