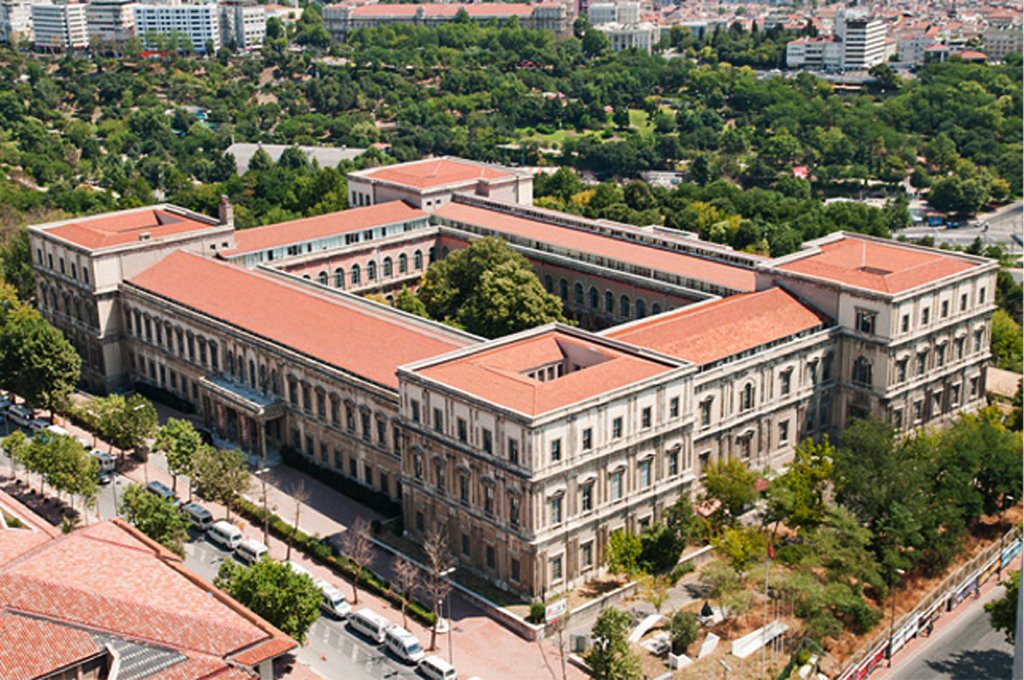 As the aim was to design an institution and building that would represent Ottoman Modernization, a design program was prepared that included a school for 300 students and a teaching clinic for 200 patients, a pharmacy, laboratories, a morgue, and various service sections and a mosque, clock tower, two pools and an Imperial Chamber.

The French used Taşkışla (Mecidiye Barrack), built by the British Architect Smith between 1847 and 1849, as a military hospital during the Crimean War between 1853 and 1855. It was not used for a while after the Crimean War. It began to be used as barracks after 1860 for the soldiers who were assigned to protect Dolmabahçe Palace. It became known as the Mecidiye Barracks in the 1860s after it was built for Sultan Abdülmecid I and was restored during the reign of Sultan Abdülaziz.

After the earthquake of 1894, it was restored under the supervision of the architect Raimondo D’aranco and during the Balkan War, which started just after its restoration, the building served as a hospital.

Taşkışla building was constructed all in structural masonry between 1848 and 1853 as a military medical academy for the Ottoman Army under the rule of Sultan Abdülmecid. However during construction, the plans drawn by W. James Smith were modified and the building’s function was changed to military barracks in 1849. This modification was part of a construction plan that included several arsenals and military barracks that were to ensure the safety of the imperial domain around the Dolmabahce Palace.

The building sustained some damage in the earthquake of 10 July 1894, and was restored by the architect Raimondo D’Aronco. In 1909, rebellious troops were based in the building, thus it became the scene of long fighting. Some results are visible in the façade, as a few of the gun shells are still embedded in the stone columns of the entrance.

It occupies 132 x 95 m of land and surrounds a courtyard in an area of 70 x 40 m. The plan scheme of Taşkışla is classical: four equal sides marked with four corner edifices and a vast courtyard. The west façade is crowned with a monumental entrance.

At present, the school has four main circulation towers connecting four wings. The general layout of the building is symmetrical and general appearances are identical. Taşkışla has three floors including one basement; there is also an extension at the attic for additional studios, and the courtyard is located at the centre. The entrance floor has many spaces allocated for exhibition, lounge and meeting spaces.

The second floor has many spaces mainly allocated for educational purposes. The inner circle of the long corridors are surrounded by architectural studios facing the courtyard, while the spaces located on the outer circle are reserved for instructors' offices. The scheme is geometrically very simple, but it gives fewer cues especially for orientation and way finding. The main need to overcome institutional character and maintain distinction is to allocate more functions on public halls and corridors.

In 1944 the building was handed over to I.T.U. and restored by architects Paul Bonatz and Emin Onat. Teaching started in the building in 1950, with the civil engineering and architecture faculties. Today it is the Taşkışla Campus of the Istanbul Technical University.

In 1983 it was classified as a first degree historical monument. In 1996 the World Habitat Congress was organized partly in the Faculty. Ever since, it has become a natural part of the congress valley of Istanbul.

Faculty of Architecture, Institute of Social Sciences, Fine Arts Department and ITUSEM Continuing Education Center are located at the Taşkışla Campus. The campus, including ITU Development Foundation and city center offices of the Rectorate, stands out with its magnificent historic building.

These scripts and photographs are registered under © Copyright 2018, respected writers and photographers from the internet. All Rights Reserved.
Posted by ISTANBUL, Extended On Two Continents at 6:05 PM