ACADEMY OF ECONOMIC AND COMMERCIAL SCIENCES 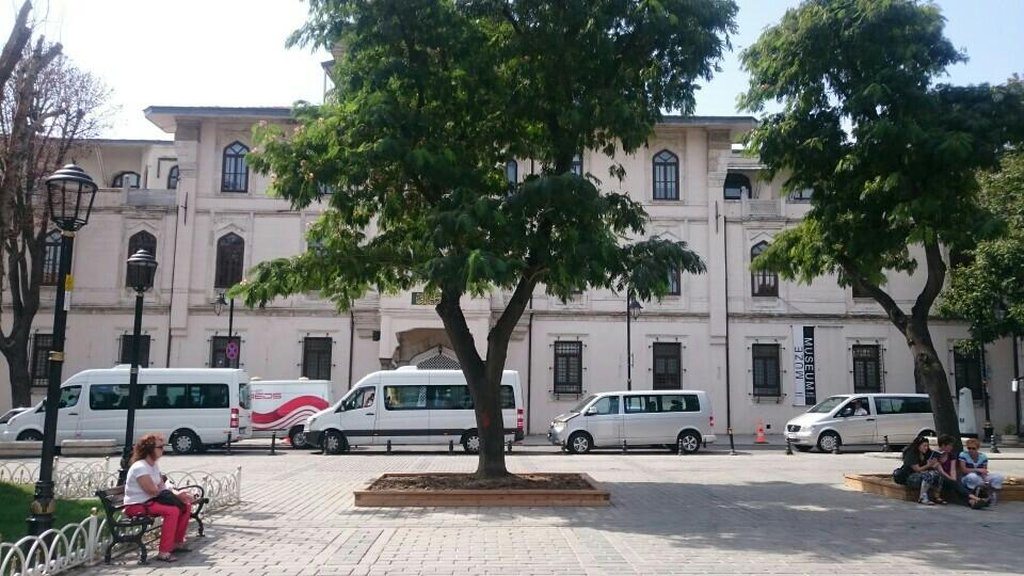 Hamidiye Trade School, the long building situated behind the Constantin Column in Sultan Ahmet’s Hippodrome area was built in 1867. The building was severely damaged during the earthquake in 1894 and Raimondo D’Aronco who was commissioned to restore the building to it’s original form used his own creativity in the process by matching Art Nouveau with Ottoman art, thereby creating a hybrid often referred as Neo-Ottoman style.

Today on top of the front entrance there still stands the old sign in old script : Agriculture and Commerce. Apparently after the restoration the building was first used as the ministry of Agriculture and Commerce, then during the era of the new Turkish Republic as the Academy of Economic and Commercial  Sciences and finally in 1975 transferred to Marmara University to be used as the President’s Office Building. In 1980 ies the building once again received extensive damage and was reconstituted for a second time faithful to D’Aronco’s first restoration.

Academy of Economic and Commercial Sciences is an institution with roots extending back into the 19th century when the Hamidiye College of Higher Commercial Education was established in the Cağaloğlu district of Istanbul on January 16, 1883. At the time, it was the only leading higher education institution for studies in commerce and economics. 13 students were the first graduates in 1887.

The school joined the Ministry of Education in 1889 but was abolished in 1893 to be renovated and re-opened later. It was re-opened on October 15, 1897 and has carried out its education programs ever since. From 1923 to 1959, the college was called the Higher Education School of Economics and Commerce and became the Istanbul Academy of Economic and Commercial Sciences in 1959.

Marmara University was formally established in 1982, when the Istanbul Academy of Economic and Commercial Sciences was consolidated with several schools of higher education offering undergraduate-level study in medicine, dentistry, law, and fine arts. To these were added faculties of arts and sciences, education, and a school of foreign languages to provide a full complement of university courses.

By July 20, 1982 the university encompassed 83 faculty members including 20 professors, 31 associate professors along with 197 lecturers, assistants and 280 instructors. Marmara University during the 1982-1983 academic year had 9 faculties, 1 vocational school and 1 institute. Today, the university consists of 14 faculties, 9 vocational schools of higher education and 11 graduate institutes. The number of associate bachelor’s and bachelor's degree programs is 136.

The Sultanahmet Campus serves as the Rector's Office.

Marmara University’s Cumhuriyet Museum consists of the Original Print Collection and the Art Gallery and İhap Hulusi Görey Gallery, where short-term exhibitions are held. The history of Marmara University’s Cumhuriyet Museum Original Print Collection stretches back to the Modern Turkish Engraving exhibition, held to mark the 50th anniversary of the establishment of the Turkish Republic.

This exhibition, which consisted of 116 works from 38 different artists, selected by Professor Mustafa Aslıer, and was held in many cities in Turkey and in a number of different countries. After the exhibitions, these works were donated to the State School for Applied Fine Arts and formed the essence of Marmara University’s Cumhuriyet Museum Original Print Collection.

The collection was enriched in 1998 by the call Professor Hüsamettin Koçan, the dean of the Fine Arts School at Marmara University, made to artist and collectors for donations, was exhibited in 1999 as "The Exhibition Imagined by the Museum" first in Istanbul, and then went on the road with the "Sanat-TIR" project. The exhibition, covering 3,636 kilometers, was held in Diyarbakır, Van, Erzurum and Bayburt.

The project to transform the Sultanahmet Rector’s Building into a center for cultural events and a museum was designed by Profesor Hüsamettin Koçan, and with the approval of the rector of Marmara University at that time, Dr. Ömer Faruk Batırel work began. However, after Batırel the project came to a halt. With the efforts of Dr. Necla Pur, who started serving as rector in 2007, the project was restarted and upon completion in 2008, the Marmara University Cumhuriyet Museum was opened.

The İhap Hulusi Görey gallery was established in 2010 as part of the celebration of the 87th anniversary of the establishment of the Turkish Republic, being added to the Marmara University Cumhuriyet Museum.

The Institute for Middle East Studies

The Institute for Middle East Studies was established in 1992 at the Marmara University in İstanbul. The Institute aims to enhance knowledge of the Middle Eastern and Islamic societies and cultures through cutting edge research and post-graduate education. The Institute offers a wide range of interdisciplinary MA and PhD courses to enable students and researchers interested in deepening their understanding of Middle Eastern history, politics, economics, social and cultural issues as well as contemporary challenges.

The current programs at the Institute for Middle East Studies also addresses recent transformations in the region, foreign policy relations, ongoing conflicts and security challenges, economic and political integration. The Institute organizes conferences and seminars and welcomes students and researchers from other countries to foster academic and intellectual cooperation.

These scripts and photographs are registered under © Copyright 2018, respected writers and photographers from the internet. All Rights Reserved.
Posted by ISTANBUL, Extended On Two Continents at 1:48 AM