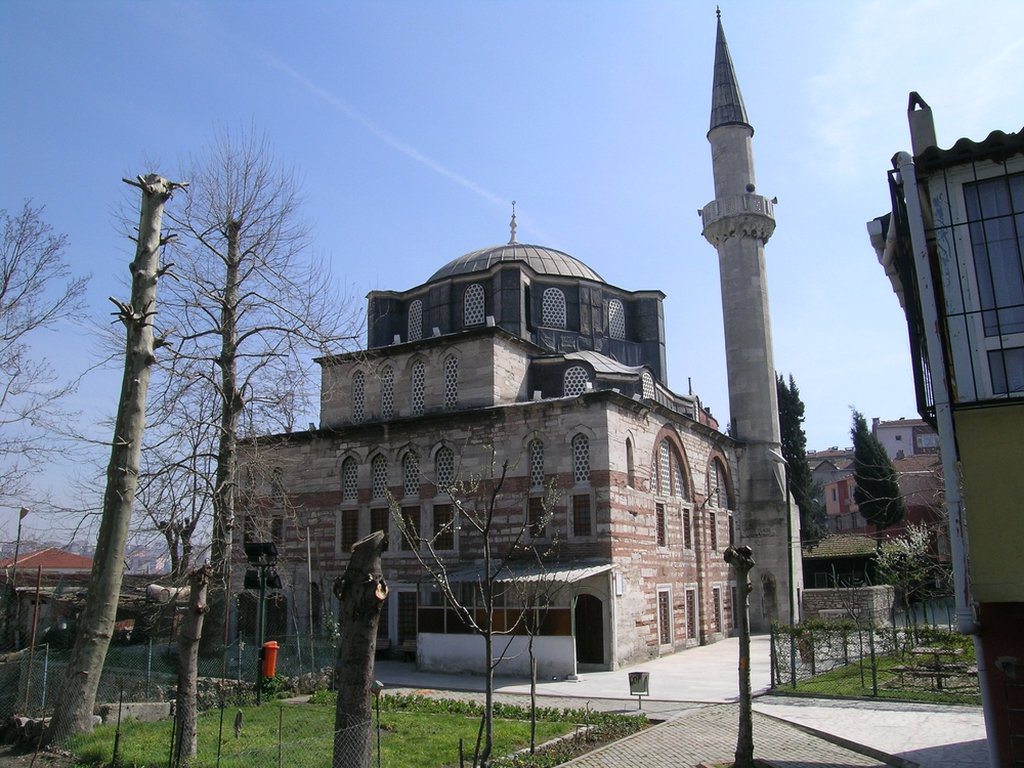 Istanbul, a house of many beauties, is still a big attraction for both domestic and foreign tourists with its various designs of architecture and unique buildings. Not only with its name but also with historical buildings Istanbul makes its mark. And Kazasker Ivaz Efendi Mosque is one of these beauties. Ivaz Ağa Mosque, which is said to have been built by Sinan the Architect in 1585, also can be seen there.

After you leave Edirnekapı and go down following the city-walls along the Golden Horn, you will come across graveyards, woods and finally the Kazasker Ivaz Efendi Mosque, which stands out with its all modestness on the city-walls as if hidden in the greens.

Ivaz Ağa Mosque, which is said to have been built by Sinan the Architect in 1585, also can be seen there. The restoration, made after the fires of 1729 and 1782, can be viewed especially well from the west wall of the mosque. The central space of the mosque which measures 15.6 x 14.5 m is roofed by a dome 9.8 m in diameter and 16.6 m in height.

The interior is very elegant and gives a great sense of light, illuminated as it is by many windows in all its walls. The west façade is most unusual: instead of a central entrance-portal there are double doors at each end of the façade, the rest of it being filled with windows; the effect is very pretty. Another odd, indeed unique, feature is that the minaret is at the south-east corner. Originally there was a porch, evidently with a sloping roof supported by columns, which ran round three sides of the building.

The mosque is almost square, its dome resting on four semidomes with stalactite cornices; the mihrab is in a projecting apse and is decorated with Iznik tiles of the best period. The centre of the west wall is occupied by a gallery in two stories supported on slender marble columns. There are also wooden galleries to north and south, but these are probably not original - certainly not in their present form.

There are two doors at the front facade and one door at both the east and west facades. The interior of the mosque is embellished with 16th century İznik ceramics, which are spectacular. The ruins of Isaac Angelus Tower belonging to Blachernae Palace, where the mosque was built upon, can be seen.

It is the only monumental building right next to the Anemas Dungeons in Ayvansaray and single-domed work of architect Sinan. The wooden portico it used to have in the past does not exist today. Well, a work of Sinan as we mentioned before, and finding many characteristic features is possible here.

Generally these kinds of mosques have a door on the centerline. In Kazasker Ivaz Efendi Mosque however, there are same-sized double doors on the left and right of the entrance frontal. The interior doors open to the place where women perform prayer (namaz), and the outer ones open to the essential place for performing prayer (namaz).

This mosque in Edirnekapı has been surviving for about 600 years, built in 1585 by architect Sinan. The Mosque, built on the command of Kazasker Ivaz Efendi, is a significant memento from our ancestors, surviving with the same name.

This mosque is an architectural structure which tells us about the splendid times of its era, which highlights the equality of women and men. Throughout the history it has been used with different purposes. Sometimes it served as a madrasah and sometimes as a school. One of the important features of this unique mosque is the mihrab decorated with Iznik Ceramics.

The colorful and patterned ceramic decorations raised the attraction. Kazasker Ivaz Efendi Mosque stands as one of the most beautiful samples of its time with both its ceramics and architectural features. Today, however, it goes on living with curious looks upon it. The mosque, which is located in a narrow area, is a popular place today for tourists and photographers.

There is a small square on the walkway in front of the Ayazma (the holy spring) on Dervişzade Street in Eğrikapı and the fountain of architect Mustafa Ağa dated from the 18th century is standing in the middle of this square.

These scripts and photographs are registered under © Copyright 2018, respected writers and photographers from the internet. All Rights Reserved.
Posted by ISTANBUL, Extended On Two Continents at 3:07 AM