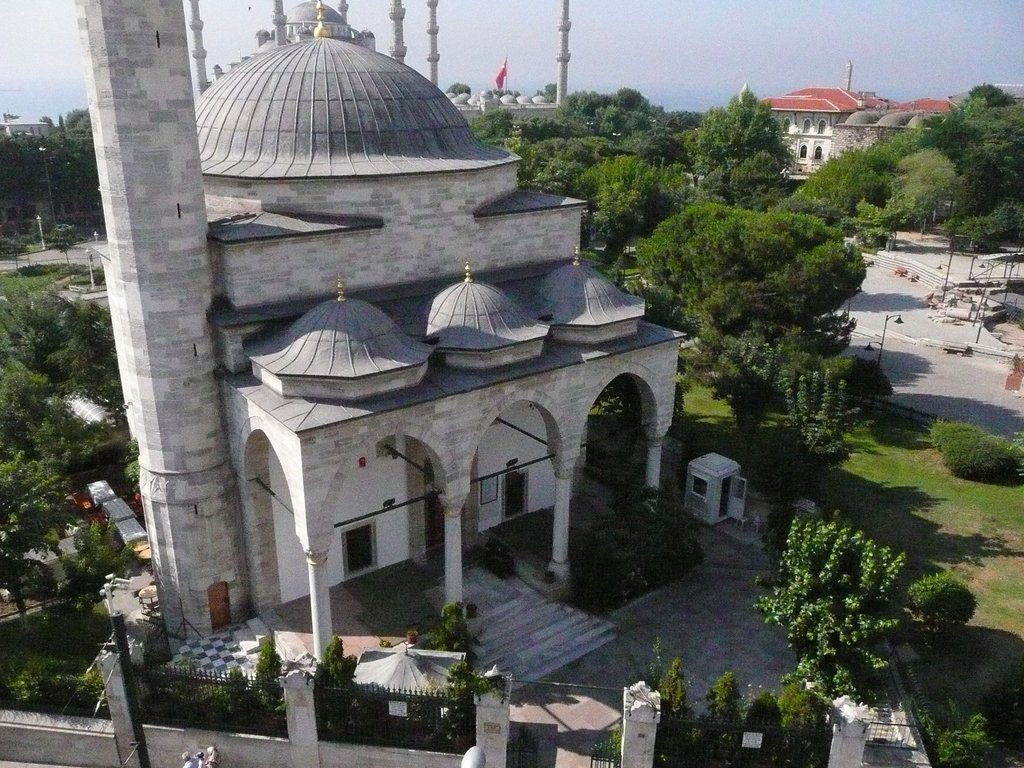 The mosque is located in the historical center of the city, on the Divanyolu Street, close to other prominent historical landmarks. Firuzaga mosque happens to be one of the famous mosques of Istanbul of the Ottoman era. Firuz Ağa Camii is located on Divanyolu, the main street overshadowed by the long queue of trees.

The Firuz Ağa Mosque is an old Ottoman mosque in the Fatih district of Istanbul, Turkey. It was built by Firuz Ağa, the head treasurer of Sultan Beyazıt II (1447- 1512) in 1491. The marble sarcophagus of Firuz Ağa is located in the mosque complex.

Mosque
The Firuzaga Mosque has an interesting history to boast about. The Sultan Ahmet used to go for various expeditions accompanies by the treasurer of the Ottoman Palace. One of the main duties of the treasurer was placing a prayer rug, known as seccade, to be placed before the beginning of the Friday prayer. Apart from this, the treasurer would always sit on the ground, before the Sultan, to lay his forhead there and ensure that there was no danger to the life of the Sultan.

Sultan Beyazid II, the son of Sultan Mehmet II, was ascended to the throne after the death of his father. It was only after a gap of 10 long years that Firuz Agha, the treasurer of the period, built a mosque at the entry point of the famous street of the Byzantine Empire. The treasurer died in 1512 and his tomb, having engravings of rose figures on the marble, is located in the yard of the Firuzaga Mosque.

The Firuzaga Mosque, with a square design of 13.5 m by 13.5 m, is built in the Bursa style and has a dome with eight sides. According to a famous story, this mosque was built at a place which was once a famous spot of horse races being watched by the Roman emperors.

This small mosque, located on the Atmeydanı in Sultanahmet was commissoned by Firuz Ağa, the head treasure of II. Bayazıd in 1491. With its dome set on a actagonal rim, it shows the typical Bursa style. The aches as well as connecting stairs. The spectacular enterance throgh the outer courtyard opens directly on the tram line today.

It has a square plan with a dome and reflects Bursa style. It was built from cut stone and placed on an octagonal tambour. Windows composed of distichous with two and the inscription belongs to Şeyh Hamdullah Efendi. The arcade porches of the mosque are not in contrast with the Classical Ottoman Architecture.

Tomb
The tomb of Firuz Ağa, builder of the mosque, was pulled down by the command of Keçecizade Fuad Paşa, (grand vizier) in the middle of the 19th century during the road widening construction. Today, the marble sarcophagus of Firuz Ağa is present in front of the wall where the minaret is located. Additionally, the cemetery of the mosque has completely been removed during road-widening construction.

Minaret
Unlike other mosques, Firuzağa Mosque has the minaret placed to the left side of the wall while usually, minarets had to be on the right side on the wall. Although, the exact reason behind the minaret being placed on the left is still unknown, there are a number of stories relating different reasons for this.

This mosque was built during the first few years after Sultan Mehmet II conquered Constantinople. The mosque was located in the neighborhood of Sultanahmet which was considered to be the heart of Constantinople. Nearly 80 percent population living in the area was Greeks. The reason why the minaret of the mosque was built on the left of the wall was that the majority of Greek population living near the mosque should not get disturbed with sound of the prayer.

However, according to another account, the Firuzağa Mosque had been built to excel the first mosque built in Mecca by the Muslims. The common tradition during the 14th century and a few years later was that minarets should be located on the left side of the mosques. It was only during some what later that the tradition to place the minarets on the right side became common.

These scripts and photographs are registered under © Copyright 2018, respected writers and photographers from the internet. All Rights Reserved.
Posted by ISTANBUL, Extended On Two Continents at 2:14 AM