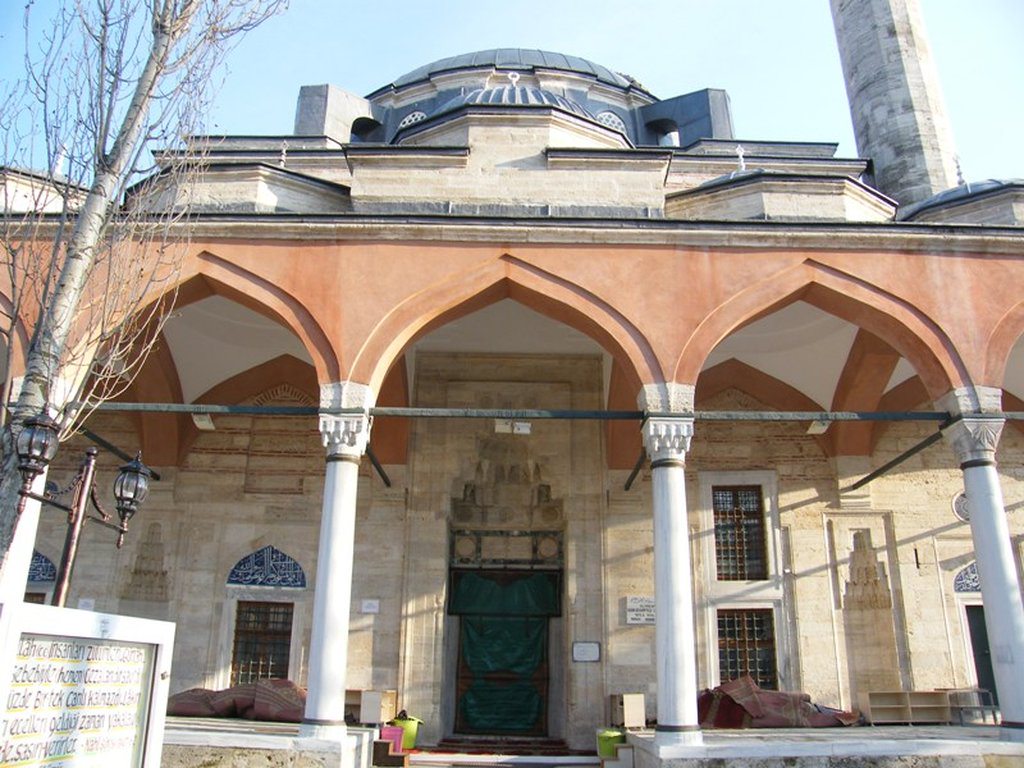 The mosque is in the form of a domed cube with an attached portico. The main dome has a diameter of 12 metres (39 ft) and is supported by eight internal buttresses. There are three tiers of windows. The five small domes of the portico are supported by arches with marble columns. The stone minaret, on the southwest end of the portico, was rebuilt in 1763-64. The mosque is similar in design to the earlier Bali Pasha Mosque in the Yenibahçe district of Istanbul which was completed in 1504-05.

The mosque has a fine porch with five domed bays and a portal surmounted by an elaborate stalactited baldachino. In form it is an octagon inscribed in a rectangle with galleries on each side; it has no columns but in the angles of the octagon, pretty pendentives in the form of shells support the dome. The marble mimber and sultan’s loge are of admirable workmanship, as are the panels of the doors, inlaid with ivory.

Over the mihrab are tiles with inscriptions; these must be a subsequent addition, for they appear to be from the very latest Iznik period or even perhaps from the eighteenth century potteries of Tekfur Saray. In the mosque garden is the attractive open türbe of the founder with a marble sarcophagus. The pious foundation, whose date is given in inscriptions over the garden gates, originally included a mektep and a hamam, but these have perished.

The mosque is decorated with a number of panels in coloured Iznik tiles. Under the portico on the north facade are three lunette panels and two roundels. The underglaze painted tiled panels have white thuluth lettering reserved on a dark cobalt blue background. Between the letters are flowers in purple and turquoise. Above the mihrab is a larger lunette panel painted in cobalt blue, turquoise and dark olive green. The purple colouring is characteristic of the 'Damascus' style of Iznik pottery but is unusual on tiles. The panels help establish the chronology of the different styles adopted by the Iznik potters.

Born in the Sanjak of Bosnia, he became Chief White Eunuch of the Topkapı Palace Harem under Sultan Suleyman the Magnificent. He was appointed Governor of Anatolia, and in 1544 was nominated fourth Vizier. In 1548-9, during the Second campaign of the Ottoman-Safavid War, he got the position of lieutenant Governor of Istanbul, reaching the rank of third Vizier.

Appointed second Vizier in 1553, after the assassination of the crown prince Şehzade Mustafa on behalf of the Sultan, he was sent by Suleyman - then stationing in Aleppo - to Bursa to strangle the son of Mustafa. Appointed again lieutenant Governor of the Capital from 1553 to 1555, after the comeback of the Sultan to Istanbul he was forced to retire because of his old age. Ibrahim Pasha died in 1562. He followed a modest lifestyle and was among the few Court Eunuchs who enjoined unanimously a high reputation.

In 1551 he commissioned Court Architect Sinan to erect his funerary mosque in Istanbul, in the neighborhood of the Gate of Silivri. On January 21, 1562, he established an endowment, which was entitled to administer several institutions in the western part of Istanbul. These were his Friday mosque with an elementary school in the Silivrikapı neighborhood; another school near Silivrikapı; a Byzantine church which he had converted into a mosque, with an attached medrese and an elementary school (also erected by Sinan) near the Isakapı Gate; another elementary school near the Column of Arcadius and a water well for travellers outside Yenikapı Gate.

The endowment was to be financed through villages donated by the Sultan, fields, shops and mills in Rumelia, and buildings in Edirne and Istanbul. The Waqf was administered by the Chief white eunuch of Topkapi. The location of these establishments in sparsely settled neighborhoods along the Walls, where the population was predominantly Christian, shows his desire of pursuing a policy of islamization of the city.

Hadim İbrahim Pasha Mosque was built in 1552 according to its inscription, which is the work of the poet Kandi. It must have been built by İbrahim Pasha, Governor of Bosnia, and designed by the Architect Sinan. The damages caused by the earthquakes of 1648 and 1754 were fixed during the restoration in 1763, and the minaret was renewed.

The mosque’s single dome, where the Sura of Fatiha is written in celi sülüs style, is 11.5 m in diameter. The tile group, which was used in the decoration of the mosque, is called Damascus work, the production of İznik, is important because of it being the first and only example in İstanbul. In addition, the circular tile panels, placed into the stone, have not been used in other buildings. In the building, ancient columns, with Byzantine capitals, can be seen. Vizier İbrahim Pasha is buried within the open sarcophagus in the courtyard.

The mosque which reflects classical period Ottoman architecture and Mimar Sinan’s artistic finesse in architecture is surrounded with walls made of face Stones. It has got three entrance Gates two of which have an inscription. Hadim Ibrahim Pasa Mosque was built as a Kulliye with its Turkish bath and schools, yet today only some ruins from their walls are left.

When the time of azan comes, the muezzin was appraised so that the azan can be recited on time. He also had a 95-page testament dating from 1560 admosnishing that the expenses be provided from the incomes of the trustee’s foundation.

These scripts and photographs are registered under © Copyright 2018, respected writers and photographers from the internet. All Rights Reserved.
Posted by ISTANBUL, Extended On Two Continents at 4:51 AM