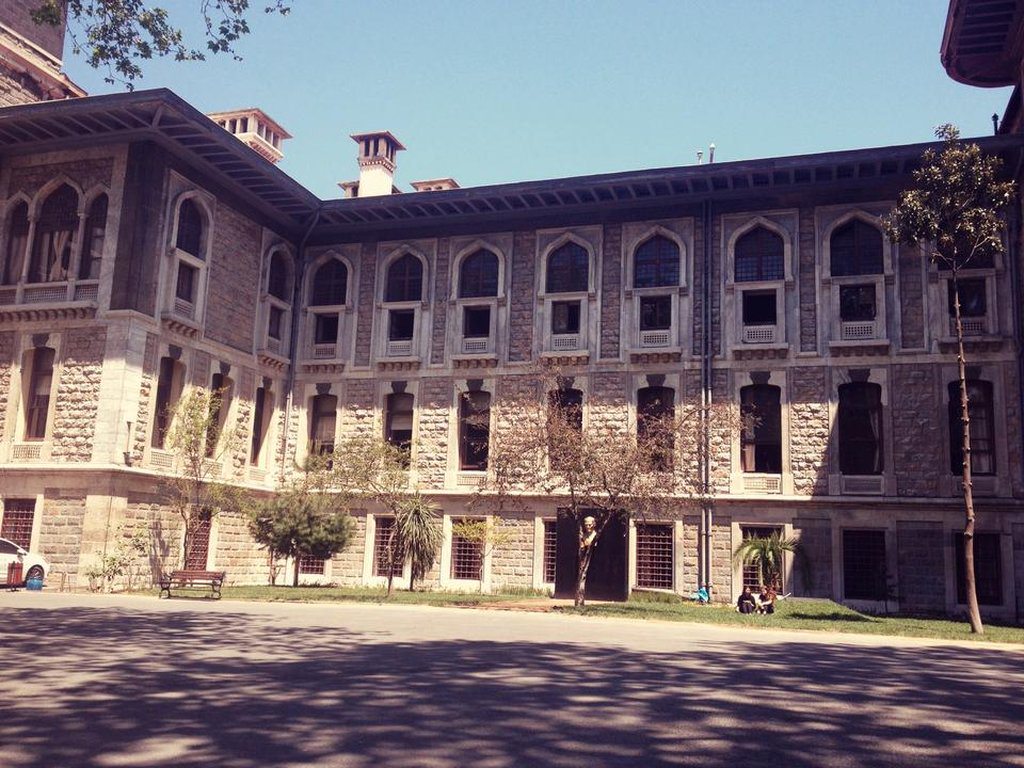 The building was designed by architects Alexander Vallaury and Raimondo D'Aronco and inaugurated in 1882 as the Düyun-u Umumiye (Council of Ottoman Revenues and Debts Administration) Building, which overlooks the entrance to the Bosphorus and the Golden Horn.

The Ottoman Public Debt Administration (OPDA) (Ottoman Turkish: Düyun-u Umumiye-i Osmaniye Varidat-ı Muhassasa İdaresi, or simply Düyun-u Umumiye as it was popularly known), was a European-controlled organization that was established in 1881 to collect the payments which the Ottoman Empire owed to European companies in the Ottoman public debt. The OPDA became a vast, essentially independent bureaucracy within the Ottoman bureaucracy, run by the creditors.

It employed 5,000 officials who collected taxes that were then turned over to the European creditors. The OPDA played an important role in Ottoman financial affairs. Also, it was an intermediary with European companies seeking investment opportunities in the Ottoman Empire. In 1900, the OPDA was financing many railways and other industrial projects. The financial and commercial privileges of the non-Muslim foreigners were protected with the capitulations of the Ottoman Empire.

The school has changed several buildings throughout its history. Since 1933 the school has used its current building.  A new building adjacent to the main historical building was inaugurated in 1984, providing new boarding and sports facilities. The primary languages of instruction are Turkish and German. The secondary foreign language of instruction is English.

Mehmet Nadir Bey, a retired Captain of the Navy, a prominent mathematician and teacher, together with Selanikli Abdi Kamil Efendi, a school principal, founded in 1882 the first private school in İstanbul, the Şems’ül Maarif (The Sun of Education), but for unknown reasons the partnership did not last long.

Mehmet Nadir Bey established his own private school Numune-i Terakki (The Example of Progress) in 1884, which would be the foundation of İstanbul Lisesi. At the beginning, the school provided primary and middle school education for boys, but would soon add high school classes, and also start accepting girls.

In an interview to a newspaper in 1891, Mehmet Nadir Bey would express his pride to have established the first private high school in Turkey. The school would not only attract many students in a short time (the number of students would reach 600 in 1891, of which 150 were boarding students), but also catch the attention of the Ministry of Education, and of the Sultan himself.

After the detection of some teachers’ involvement in an unsuccessful coup to overthrow Abdülhamid II, the school was purchased by the Ministry of Education in 1896, which changed its name to Terakki İdadisi (Progress High School). From 1896 to 1908, the school became a day school, changed several buildings, and according to the facilities occupied, varied in size and number of students. Following the move to a larger building and the legislation combining the 4-year primary school and 3-year middle school into a 5-year education, the school was able to provide boarding again in 1908, and the name of the school was changed to İstanbul Leyli İdadisi (Istanbul Boarding High School) in 1909.

In 1910, the school started to use the word Lise (Lyceum), a first in a Turkish school. İstanbul Lisesi was a 5-year boarding school charging tuition, and was admitting students following an examination. The physical education teacher of the school, Abdurrahman Roberson, established İstanbulspor and a boy scout group in 1912. The scout group, later named Sakarya in honor of the Turkish victory in Battle of Sakarya, is still active to this day. Also in 1912, during the First Balkan War, about 30 students volunteered for the defense of the capital against the advancing Bulgarian army.

The school name was changed to İstanbul Sultanisi (Istanbul High School) in 1913. Following the closing of the foreign schools in İstanbul due to the beginning of the First World War, İstanbul Sultanisi was moved to the buildings of the Saint Benoit High School, and some parts of the buildings were changed to dormitories. The faculty was supported with the addition of prominent teachers, and the student populace exceeded 1600.

Subsequent to the increased collaboration between the German and Ottoman Empires, 22 German teachers were sent by the German Ministry to the school, and the curriculum was changed to German. The curriculum was similar to Galatasaray High School, only the foreign language was German instead of French. The students would take 14 hours of weekly lessons in German, and the same lectures again in Turkish, except history and literature, which were taught only in Turkish.

The Armistice of Mudros, the subsequent occupation of İstanbul, and the incompetence of the government in İstanbul had important effects on the school. As the school was given only 2 days to evacuate the building by the commander of the occupying forces, most of the valuable library and the educational material had to be left behind. The school was not able to find a suitable building for a long time, and some students continued their education in different buildings, sometimes in different schools.

Nonetheless, the faculty was still very strong and many of the teachers, such as Hasan Ali Yücel, Mazhar Nedim, Memduh Şevket Esendal, would become the prominent figures and/or leaders that contributed to the shaping of the society, ideological basis, and the governance of the Republic of Turkey. Some of the students and many alumni would join Atatürk in his struggle for independence at very early stages, and some would lose their lives during the battles.

With the declaration of the Republic, the school moved to the Fuat Paşa Mansion in Beyazıt and its name was changed to İstanbul Erkek Lisesi (Istanbul Boys' High School) in 1923. On Atatürk’s instructions, the school moved to the building of the former Düyun-u Umumiye (Council of Ottoman Revenues and Debts Administration) in 1933. During the Second World War the German education was suspended in 1942.

Curriculum in German was introduced again in 1958 with the Bilateral Collaboration Agreement on Culture and Education between the Federal Republic of Germany and the Republic of Turkey. Last students of the regular high school curriculum would graduate in 1962, and the school started to admit girls in 1962, although the boarding was only provided to boys. The school remained a 7-year secondary school (1 year of preparatory, 3 years of middle school, and 3 years of high school).

As a state school, admissions to İstanbul Lisesi are through the Secondary Education Institutions Entrance Exams (OKS), the central state school examination. İstanbul Lisesi is one of the most difficult schools to enter of all the 400 Anadolu Lisesis (special state secondary schools) in the country. Admission to the İstanbul Lisesi requires a tough competition, since only 180 students out of 1,400,000 applicants can make it through every year, and İstanbul Lisesi is usually among the first choices of best ranked students along with Galatasaray High School and leading Fen Lisesis (Science high school).

The school offers a tuition-free, high level education, providing voluntary boarding possibilities, and as such, draws a diverse group of students from all over Turkey, including students who cannot afford private education. The academic program enables students to pursue academic excellence and acquire fluency and literacy in German and Turkish.

İstanbul Lisesi is the first Turkish school to offer private high school education (~ 1886) to publish the first student newspaper (before 1887) to use the title "Lise", equivalent of 'Lyceum' (1910) to provide German education to students (1912) to show a movie in the school (~1913) "Les Misérables", shown as "Jean’in Hikayesi" (Jean’s Story) to establish a student theater group (~1913) staging Abdülhak Hamid’s “Eşber” and “Pinti Hamid” (L’avare), a Molière adaptation by Teodor Kasap whose students wore hats in İstanbul, following the announcement of the Reform of headgear and dress (1925).

The education period is five years (one year German preparatory, and four year high school). The German Abitur has been offered at İstanbul Lisesi since 2002. The Abitur diploma permits successful students the admission to any German university in almost any faculty. All science and mathematics courses in the last two years are at Abitur level. İstanbul Lisesi has a very strong academic record, with a high proportion of its students proceeding to prominent universities in Turkey, Germany, Austria and the United States.

The school combines both German and Turkish curricula. Mathematics, geometry, chemistry, physics, biology, computer science and German classes are instructed in German, while history, geography, civic education, military sciences, religion, philosophy, literature, physical education, art and music are taught in Turkish. Textbooks, curricula and standards are under the permanent supervision of the German government. German and English are the compulsory foreign languages taught at İstanbul Lisesi.

Since 1999 İstanbul Lisesi has been a 5-year school. All students are required to spend their first year learning to master the German language, taking twenty-three hours of instruction in their first year and eighteen hours in their second year. Science, mathematics and English courses also start in the preparatory class.

Biology is the first science class followed by physics and chemistry in the ninth and tenth grades (second and third years, respectively).
In the eleventh grade the students choose between two majors: Mathematics and Sciences (FEN), or Turkish and Mathematics (TM). Students who aim to pursue careers in engineering, sciences or medicine, major in FEN, concentrating on science and mathematics courses. TM major is dominated by courses in social sciences and mathematics and is for students who want to study humanities, business, economics or social sciences.