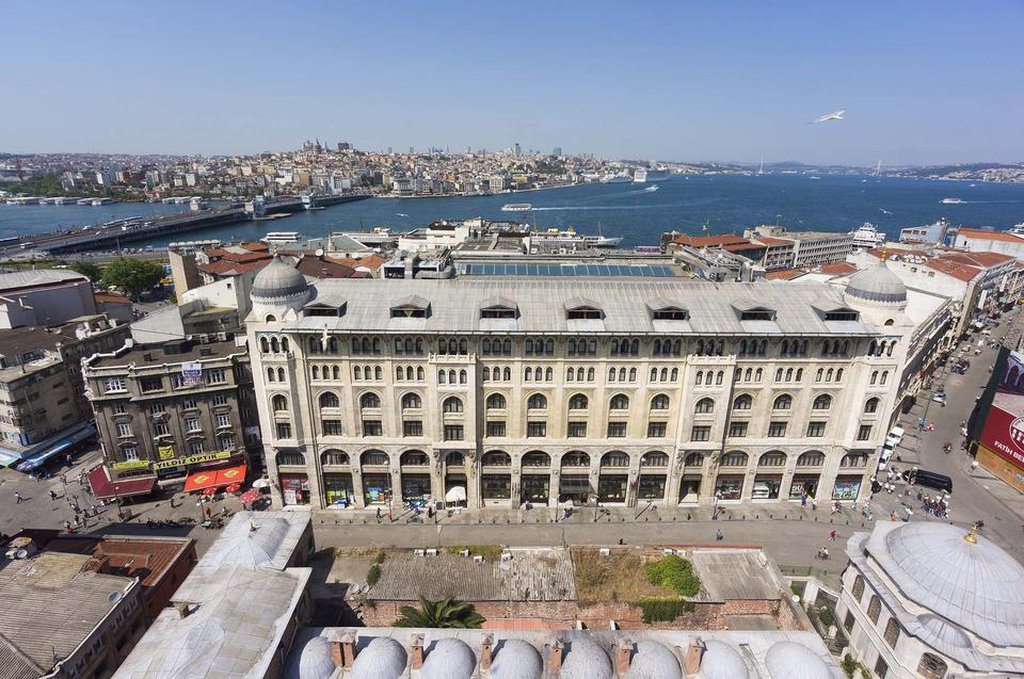 4. Vakıf Han which was built in the place of Sultan Abdülhamid I Külliyesi (Islamic-Ottoman social complex) is one of the prominent works of main representative of National Architecture Movement; Architecture Kemalettin Bey. It was built in the late period of Ottoman Empire in order to meet the dense requirements for the office blocks convenient for the contemporary life.

This building; constructed between 1911 and 1926, is the most beautiful and magnificent among the similar ones. It was not completed because of the war, its outer side was completed during the Conquer of Istanbul, but in spite of being incomplete, it was used as headquarters by the France under the name of "Caserne Victor".

The entrance of the 4.Vakıf Han facing Hamidiye Mosque is 76,70 meters width and 27,21 meters height. The depth of the building in the widest part of the building which is constructed partially adjacent to the neighbour buildings in the Western direction is 32,43 meters. Inner courtyard is 35, 32 meters length, 5, 20 meters width. The courtyard is divided into two parts by a flush over the 1st floor. On the level of this flush; the lower part covered by glaze with metal construction, is similar to the outer part in terms of richness of marble coverings, woodworks and meticulous craft.

The outer sides are designed as ashlars stone and marble overlay in the west, coast and east directions; the north front, which is designed simpler, is left with plaster over the brick wall. Roof covering is of Marseilles tile. The architectural construction of the inn had been considered under the steel structure system and it has 7 floors with the basement.

The side fronts are built of ashlars stone; the divisor walls and back front are built of brick. Asbet tablets cover the roof. The two entrances located symmetrically on the ground floor are opened to the ends of a passage shaped as “U”. The stairs and elevators that are placed on the corners of this passage are linked to the upstairs. The two domed rooms built flat in the corners of the roof provide a tower appearance to these parts.

In architecture, arch corners and the piers in locked stones, muqarnas in cubali cantilever, medallion and Julian patterns, Turkish triangles on the windows of first floor; muqarnas flushes on the windows of third floor; blue-white china on the corners of arches of the fourth floor; between the arches of the upper floor marble pillars in the shape of diamond and the muqarnas, palmate patterned cornices reflects the decoration insight of the style.

4.Vakıf Han is an architectural monument with the rooms with high ceilings, the corridors that are appropriate for long walks, the pillars decorated with ashlars, stone carved balconies, wall ornaments, stair head and bars and aesthetic windows. From the upper floors of 4.Vakıf Han; the Golden Horn’s and Bosphorus’ junction part, Beyazıt Tower and Mosque silhouettes provides a magnificent visual feast. The domed towers formed an important visual beauty both in narrow streets of Sirkeci and the changing urban silhouette of contemporary Istanbul.

These scripts and photographs are registered under © Copyright 2018, respected writers and photographers from the internet. All Rights Reserved.
Posted by ISTANBUL, Extended On Two Continents at 6:42 PM