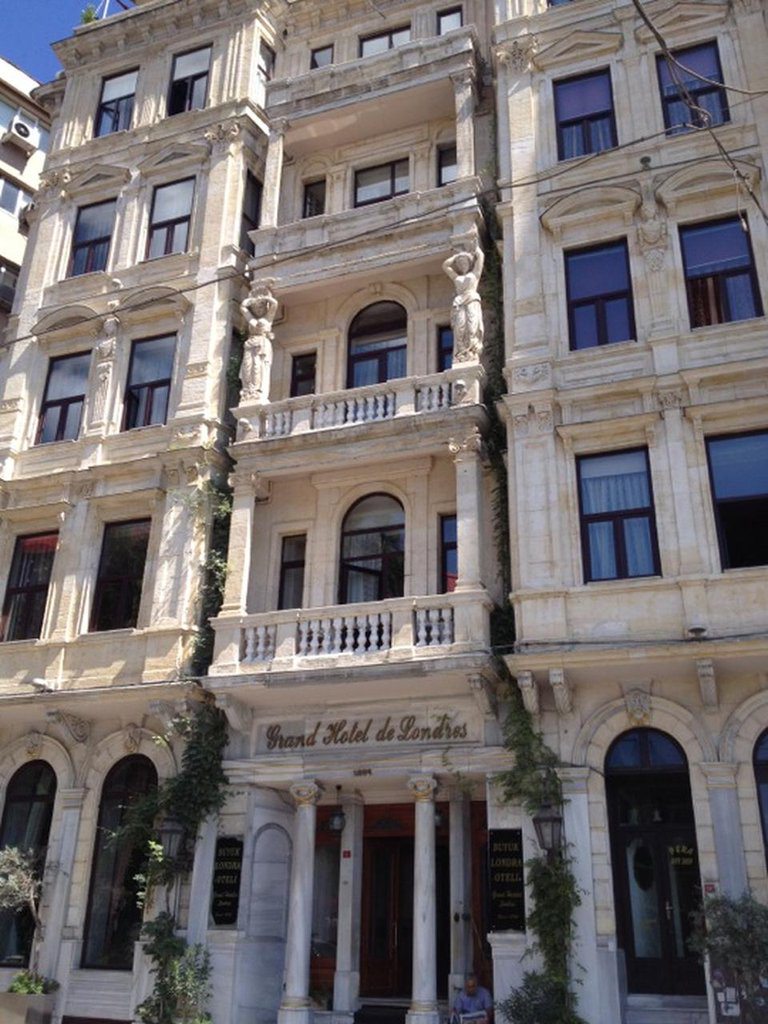 Hotel Büyük Londra owes its name to the tourism movement beginning in the 18th century when English people, as the first tourists of the West, began exploring countries like Switzerland and places like Rivieras. As a result of this movement, the first great hotels built in those places were named after cities in England.

At the end of the 19th century, as the Orient Express stretched as far as Istanbul, this city became a tourist destination as well and hotels began to appear on the northern part of the city, also called "new city", "Pera" meaning "accross (of Istanbul)" or "Beyoglu" at the same time. Hotel Buyuk Londra or Grand Hotel De Londres was one of those hotels standing on a hilltop overlooking the Golden Horn (sea) seperating the "old" and the "new" city.

Hotel Londra was built in 1892 by two partners named L. Adamopoulos and N. Aperghis in the place of the former residence of Glavany family, whose name was given to the adjacent street. (today "Kallavi street") The building was multi-storey and masonry which was rather new for Istanbul and had the latest technology of the time, including a hydraulic elevator and bathrooms with tubs (according to rumours, tubs with jacuzzis).

The interior also looked good with heavy furniture and ornate curtains. Moreover, the panaromic Golden Horn view was unimpeded and could even be seen from the lobby as the front side of the building was the popular Tepebaşı Park. It was because of this view that for some short period the hotel was called as "Hotel Belle Vue" instead of Hotel Londra.

Architect Semprini followed the popular eclectic architectural movement of the time; with the facade of the building very richly ornamented (thanks to the very soft stone used) which still makes Hotel Londra one of the most beautiful buildings in the city.

Ownership and management of the hotel changed hands several times. According to an advertisement in the Istanbul City Guide 1926, the owner of the hotel was Moulatich. In 1930's the land registry records show the D'Andria family as the new owners of the hotel. This Levantine family carried the ownership of the building and its management until the end of the 60's, when they are supposed to have emigrated to Greece.

There is an interesting story of an American banker escaping from his country, which took place during the D'Andria management of the hotel. The banker escapes first to Greece and then to Istanbul with 198 million dollars that he acquired by illegal means. He chooses to settle in Hotel Büyük Londra. After bargaining for a price of 2.5 Liras from the rack rent of 5 Liras, he starts living at the hotel for one week before he is caught. Police searches the money everywhere, in every corner of the hotel, but they can never find it.

In the list of famous residents of the hotel, Ernest Hemingway is noticeable who was here for three weeks in 1922 to cover the story of progressing Turkish nationalistic forces for his newspaper Toronto Daily Star.

In this era, Hotel Londra competed with bigger hotels in the area such as Pera Palace and Tokatlıyan by its lower prices. In 1930's the hotel began losing its splendour as the new government of Turkey followed more nationalistic policies in economy. In 40's, the hotel was almost forgotten because of the WWII and its economic hardships. When modern and new hotels such as Hilton and Divan were built in Istanbul of 1950's, Hotel Büyük Londra had lost all its hopes for recovery.

In 1967, the Huzmeli family became the new owners of the hotel, but the glories of the past were only a memory then. The hotel passed through a comprehensive renovation in 1983 which coincided with the tourism revival in Turkey. This increased the Hotel's popularity and in a slow process reaching our time, Hotel Buyuk Londra became the meeting place of intellectuals, travellers and curious people.

When "Orient Express" reached Istanbul five years after its operation in 1883, the first hotels of Istanbul had already begun to appear, in the very cosmopolit westernized section of the city called "Pera". One of those hotels was "Hotel Büyük Londra" or "Grand Hotel De Londres", which soon after its opening took its place among the best hotels of Istanbul, together with Tokatlıyan and Pera Palace.

Hotel Büyük Londra is one of the few establishments managing to survive from that era to our time. Passing through many renovations, the hotel nevertheless still graciously reflects the atmosphere of the 1900's. With some of its rooms overlooking the Golden Horn and a lively bar, Hotel Büyük Londra is the meeting point of many people - local and foreign- looking for something different and special...

"This hotel is one of the most famous and popular in Istanbul, and certainly the best in its price-range. The beautiful building dates back to 1892 and is very tastefully and ornately decorated, with such oddities as parrots, gramophones and other strange items (portable coal burners!). The hotel attracts the artsy-fartsy crowd, including writers (Hemingway himself in 1922), artists and actors. The normal rooms are clean, the suites are quite plush with jacuzzis and nice thick carpets."

"This six-story, mid-19th-century hotel has aged gracefully. The rooms are small and comfortably worn, the furnishings heavy and traditional. The dark woods and velvet drapes used in the high-ceilinged lobby and dining room evoke an Ottoman Victorian era."

"Grand Hotel de Londres (Büyük Londra Otel), was the most prestigious establishment of Pera (Beyoğlu) for ages. This luxury hotel was built in 1892 by a Levantine family which was called Glavani. The hotel was decorated with the same style as that of "Orient Express" and is the only example which is still alive today.

Some of the 54 rooms in the hotel have a splendid view of the Golden Horn and the old Stamboul. The hotel is particularly well situated. it is just a few steps from the Galatasaray Square and it is in the middle of the Main Street (Istiklal Caddesi) between Taksim and Tünel. It is situated in the center of the old district of the Latins Christians. The theatres, the opera, the cinemas, the cafes, the taverns and the restaurants are all around the hotel in this district.

GUEST ROOMS
With our rooms at various sizes and locations in the hotel, there is something for everyone. Some rooms are recently decorated. All rooms have private baths.

BARS AND EVENTS
Once, Grand Hotel de Lonres Restaurant was located at the lobby floor and it was well-known amongst locals. This tradition continues today with two bars located in various floors and Buyuk Londra hospitality. From presentations to celebrations, our hotel is the ideal destination for all your meetings, events, banquets and gala affairs.

These scripts and photographs are registered under © Copyright 2018, respected writers and photographers from the internet. All Rights Reserved.
Posted by ISTANBUL, Extended On Two Continents at 7:09 PM