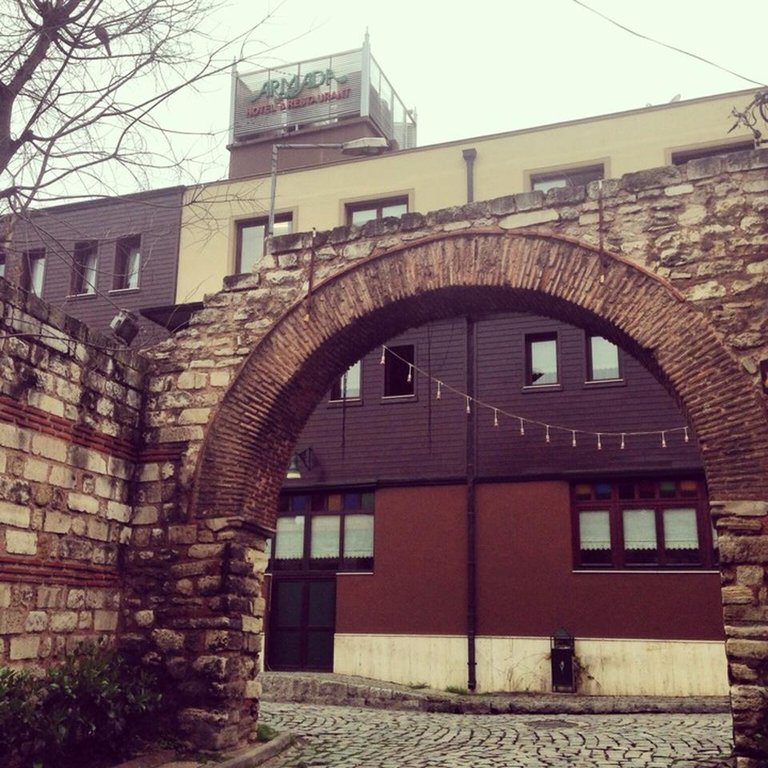 Its own building is an example of cultural preservation. At one time, the wooden row houses that Barbarossa Hayrettin Pasha had built for his sailors stood where the Armada building is today. Armada was constructed by redesigning these houses.

Armada was constructed in the heart of the old Istanbul peninsula surrounded by the historic city walls in the Sultanahmet quarter, where, at one time, Admiral Barbarossa Hayrettin Pasha had houses built for his sailors in the 16th century, and when these burned down, row houses were built in their place. Therefore, Armada was designed based on old photographs of these houses remaining faithful to the exterior architecture. Today’s comfort and yesteryear's atmosphere were combined and reinterpreted through both interior and exterior decore.

Armada was constructed in the heart of the old Istanbul peninsula surrounded by the historic city walls in the Sultanahmet quarter, where, at one time, Admiral Barbarossa Hayrettin Pasha had houses built for his sailors in the 16th century, and when these burned down, row houses were built in their place. Therefore, Armada was designed based on old photographs of these houses remaining faithful to the exterior architecture.

Today’s comfort and yesteryear's atmosphere were combined and reinterpreted through both interior and exterior décor. Armada succeeded in establishing a positive impression with its building and influenced the immediate vicinity so that numerous buildings in the quarter were repaired and brought back to life so that literally served as a civil model of the “social complex” (külliye), which played such an important role in old Turkish urban culture with new, distinctive establishments.

Interior design is an inseparable aspect of proper architectural preservation. Which of the remaining historical elements can be reinterpreted to resonate with a contemporary modern context in a way that is also timeless? When making these decisions, Armada avoided kitsch, nostalgic and populist interpretations, preferring instead to create a space truly reflective of the Istanbul lifestyle.

Our Interior Designer, a valuable expert in his own right, played the most important role in this area, along with some of our other friends. From the very beginning, Yontan, who created our logo, has demonstrated an unwavering sensitivity to the historical integrity of our interior design and decoration and has maintained an eager, authentic, ethical approach to his work, whichever aspect of it he may be dealing with. From his hundreds of sketches, we have several examples that were brought to life, her eon display.

Armada’s Office Building and Garden
After the hotel opened for business, the Armada team turned its attention to restoring the neglected neighboring property on Keresteci Hakkı Sokak.The concrete house was restored and given a historically correct wooden facade, and converted to an office. The garden was arranged in a style reminiscent of old Bomonti gardens and opened as a restaurant in 1997. Today the garden is used as Giritli Istanbul restaurant’s summer location.

"Alafranga Lokanta" / Giritli Restaurant Building
In 1999, we renovated the wooden Sultanahmet-style house that was left to rot on Keresteci Hakkı Street so that it would take people back to the period when European culture was first introduced to Ottoman society. The building was brought back into use as a chic restaurant with a 70-person capacity. The menu included a mixture of late 19th-century and early 20th century cosmopolitan and Ottoman and western cuisine.

The “Alafranga” or European feel was reflected in the decor and the traces of the cultural synthesis of the period as well as in the menu. The restaurant, which in a later period focused more exclusively on French cuisine, came under the current ownership of Giritli Restaurant midway through the previous decade.

Three wooden houses with bay windows on Keresteci Hakkı Street in Ahırkapı were renovated with care, named “Stablesgate Houses” and opened as a guest house for foreign visitors. The trend to live like the locals became popular in the 21st century, and Ahırkapı Evleri attracts travellers who want to experience contemporary life in an historic Sultanahmet house.

Stablesgate House & Studios
This unique concept allows guests to luxuriate in the space and privacy of their own beautifully renovated private house, whilst enjoying hotel-style services. Stablesgate is so named as the area used to be the stables of the Topkapı Palace. Apart from the rare advantage of having so much private space, one of the main attractions is the setting.

Breakfast
Armada offers a Turkish Style breakfast buffet including a variety of pastries (poğaça, açma, börek) and bread made with natural flour and custom baked, as well as natural jellies from the Armada kitchen, fresh eggs and dairy products from villages in addition with cereals. Throughout the summer, breakfast can also be enjoyed outdoors on the Terrace with its spectacular view.

Meeting Facilities
Armada has five meeting rooms, a spectacular Terrace for those special occasions and a multi-purpose “Armada Salon”.

Banquet
During the meetings and organizations to be held at the Armada Hotel, the Armada Kitchen with authentic Istanbul tastes will also be at your service. The home made cookies and pastry, a sort of Turkish donut; "simit" and cheese are served along with the traditional coffee and tea during the breaks. The catering for coffee breaks are prepared and served through the mobile traditional street carts and generally takes place at the Fountain Cafe. For the meals you may choose the restaurants of "Armada Terrace" and/or "Armada Salon" according to seasonal conditions. The capacities of the eating facilities is given below:

These scripts and photographs are registered under © Copyright 2018, respected writers and photographers from the internet. All Rights Reserved.
Posted by ISTANBUL, Extended On Two Continents at 1:12 AM