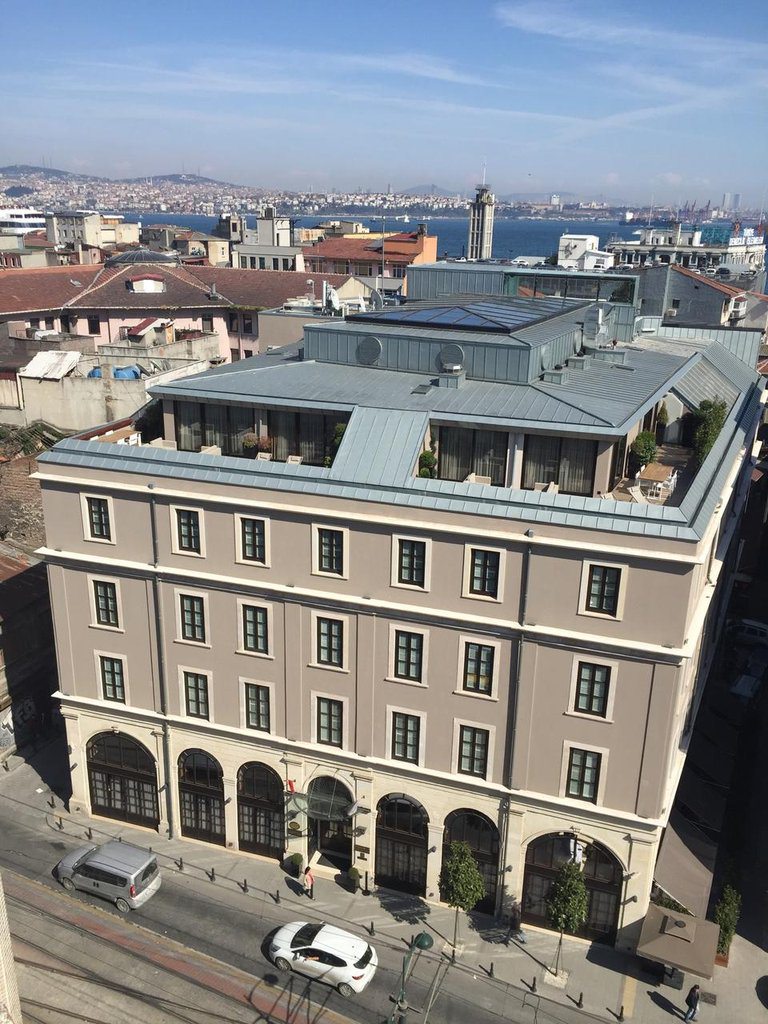 Büyük Balıklı Han is one of the samples of cultural heritage of various civilizations of Istanbul. It was primarily built as a hospital and later used as a commercial center. The building was demolished and rebuilt twice, and the present masonry building was erected in 1875. It is situated on a rectengular area of 951 m2. The building consists of 6 floors, including the basement and has a glass roof over a large atrium.

The wooden building, which shared the same site with current building, used to be operated as Balikli Greek Hospital until 1753. In order to avoid the epidemics in the city such as plague, carried by those who arrived at the hospital by ships back then, the hospital was moved outside of the castle walls to Yedikule. In 1745, the patients with epidemic diseases were transferred and in 1753, the hospital personnel were relocated with all the incumbent physicians.

In 1762, the hospital came into service once again thanks to the support of Yorgo Stavrokoglou, a rich Greek public figure of the period. With Italian, Greek and Turkish elements, the name of the hospital was altered to Ospitalon Ton Gemicidon (Seafarers’ Hospital), with regard to the multi-national characteristic of the Galata neighborhood.

After the wooden building had burned down during one of the common fires in Galata, the hospital was rebuilt by Marko Kalfa with the support of Kirillos IV, the Greek Patriarch of the period, and Yakovos Argiropulos, one of the translators of the Sublime Port and with the financial contribution of Greek Community of Galata. It was put into service on December 1, 1814. The great marble epigraph, which was made in the memory of this incident, can still be seen in the inner yard of the Grand Balikli Inn.

The current building was restored in 1823 and slightly extended. After Skarlatos Stratis, on whose name the hospital building was registered, fled from Istanbul in 1825 to avoid arrest, the Ottoman government took possession of the unclaimed building and auctioned it. It was purchased by Rallu Yorgaki, another Greek rich man who ensured that the hospital was owned by the Greek community. The hospital remained in service until 1839. Since the Greek Hospital in Yedikule had a more extensive area and favorable conditions, the patients within were sent to Yedikule on February 14, 1839 and Galata Hospital was closed down.

Until 1873, the building was used as an inn with manufacturing shops and storerooms inside. After the demolishment in 1873, the inn, which is dated 1875 according to the inscription on the yard wall, was built on the same location as an income to Balikli Greek Hospital by Patriarch Yoakim II with the donations of the well-known Zagforos, Zarifi, Rali, Koronos, Hacopulo and Kazanova families, all from the rich Greek community.

Having been built by the Architect Aristidi Razi and completed in 1875, Grand Balikli Inn, which is now the property of the Balikli Greek Hospital Foundation, was registered as a historical building subject to protection in accordance with the decision of High Council of Monuments. There was a variety in the professions performed in Grand Balikli Inn in 19th Century. Almost all of the business men in Grand Balikli Inn were non-Muslims as was the case with the other inns.

Besides the main entrance on Kemeraltı Avenue, it has three more entrances saved in harmony with the original architecture. The rooms on the guest floors are lined in porticos as in the Ottoman architectural style. On the ceilings of the rooms, the original old brick has been protected as an element to enrich the interior design. The basement that is made of arched passages forms tunnels of large vaults. These vaults are kept visible to create an effect of the historical architecture.

The atrium at the main entrance of the lobby floor, which is paved with marble, extends the outdoor atmosphere inside. The pool embellished with bronze piscine figures is placed right in the axis of the main entrance, which refers to the original name of the building. The main restaurant-bar located on the 5th floor overlooks the Karaköy Port and the historical peninsula of Istanbul as well as the unique Galata Tower.

Stone cladding on the exterior of the building was refined and with required restoration the building has gained its original façade. The main concept of the architecture aims not to surpass the characteristics of the building but to remain in compliance with the historical values to stress the original architecture with well-selected elements. As such, bronze is one of the main materials used.

EAT & DRINK
ON10 : Located on the hotel’s terrace floor, ON10 draws guests with a tempting menu of world snacks
RUDOLF : Award-winning Chef Rudolf Van Nunen is a man of many talents. He has extensive practice in, and unarguable mastery of, a variety of global cuisines, including French, Dutch, German, English, Turkish, Indonesian, Thai, and Cajun

These scripts and photographs are registered under © Copyright 2018, respected writers and photographers from the internet. All Rights Reserved.
Posted by ISTANBUL, Extended On Two Continents at 3:20 PM