TOWER OF THE HEAD TUDOR 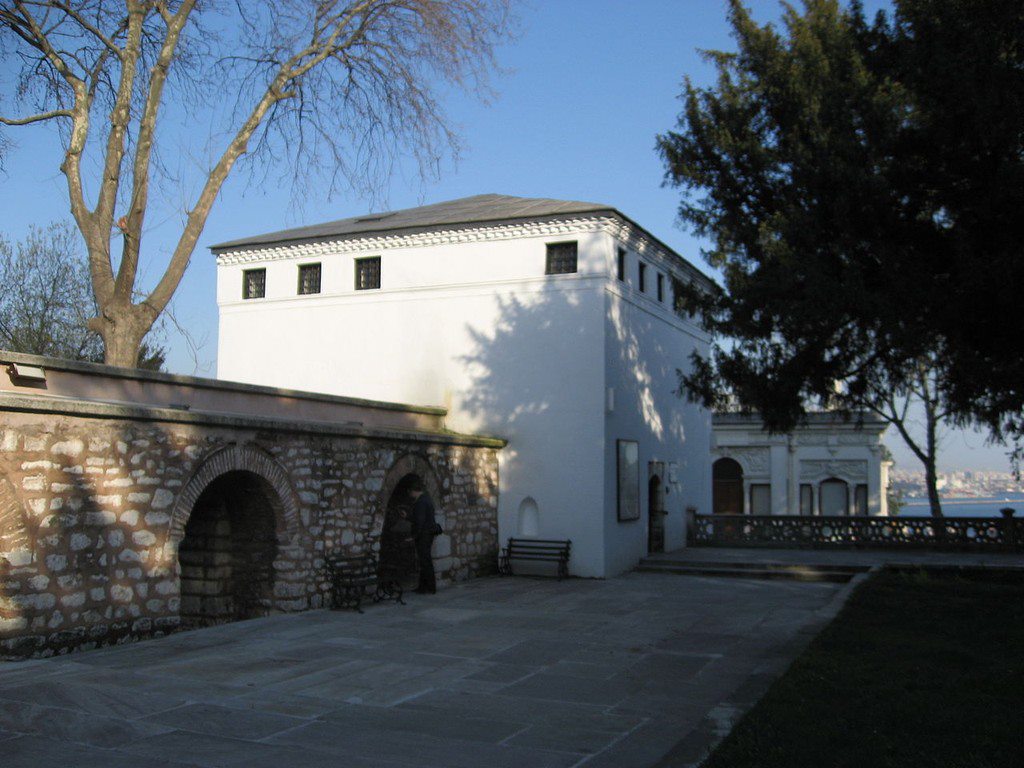 The square Tower of the Head Tutor (Başlala Kulesi), also known as the Chamber of the Chief Physician and court drugstore (Hekimbaşı Odası ve ilk eczane), dates from the 15th century, and is the oldest building in the Fourth Courtyard. It was built as a watch tower, probably during the time of Sultan Mehmed II. It has few windows, and its walls are almost two metres thick. The physician had his private chamber at the top, while below was a store for drugs and medicine.

The first court pharmacy was established during the reign of Sultan Mehmed II. There were also other pharmacies and infirmaries at the palace besides this particular one. According to a legend, Enderunlu Tayyar Efendi, who was the Chief Tutor (Baş Lala) during the reign of Sultan Selim III, saw from the upper floor of this tower the rebels coming to the palace to assassinate the sultan and alarmed the sultan's loyalists. The historian Afa writes that the tower was more than two floors higher than today but today it only has two storeys left.

The Chief Physician (Hekim Başı) and the Chief Tutor shared this place as their residence. The Chief Physician was responsible for the health of the sultan and the imperial family and used to prepare the medicines here. Under his supervision and those of the chief tutor the palace drugs were prepared, mixed and sealed in bottles, jars, boxes or bowls and given to the patients. The mixtures and drugs to be administered to the patients were prepared by health workers under the authority of the Chief Physician and in particular, the pages of the Pantry Ward.

The Sultan in particular and all the members of the Harem and Enderûn were medically treated by a group of physicians, eye doctors and surgeons headed by the Chief Physician. The Chamber of the Chief Physician was a sort of court pharmacy named after the chief of the court physicians, ophthalmologists and surgeons whose number was ranging from 60 to 70, and who belonged to the Ottoman government structure called the “Bîrûn”.  In addition to the Chamber of the Chief Physician there were two more pharmacies and five hospitals in the court, including one on the Harem premises.

The Chief Physician was also a companion of the sultan outside the palace, accompanying him even on battles. The office of the chief physician was traditionally held by Jews. After the 17th century, there were increasingly Muslim physicians along with Jewish and European physicians.

The last Chief Physician was Abdülhak Molla, who lived during the reign of Sultan Abdülmecid I. After the sultan moved away from Topkapı, the tower was used as a music conservatory and later used for the cleaning of palace arms. It was restored in 1911 and houses the medical and pharmaceutical objects collection.

These scripts and photographs are registered under © Copyright 2018, respected writers and photographers from the internet. All Rights Reserved.
Posted by ISTANBUL, Extended On Two Continents at 3:14 AM