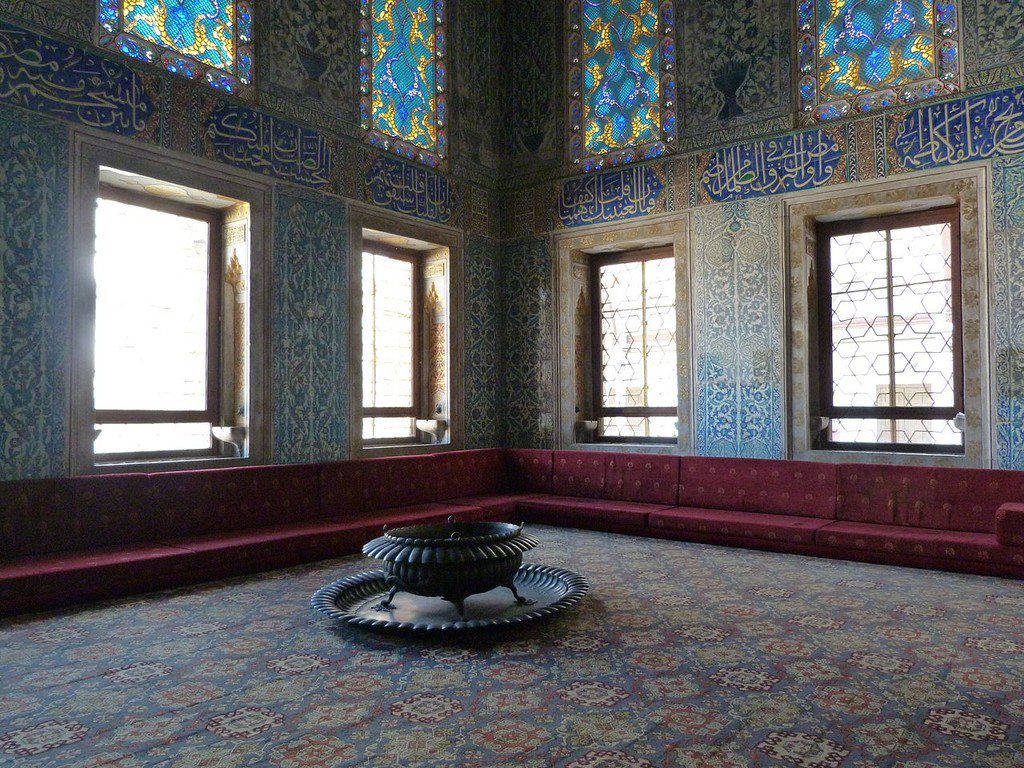 The word harem, as meaning taboo and/or forbidden, had been used for family concept in the Islamic society. Harem is the private and prohibited place where the dynasty lived in the Ottoman Palace. Harem is a rather important complex in terms of architecture that contains examples of palace architecture styles belonging to various periods starting from 16th century to early 19th century, where hundreds of concubines and harem chiefs that consisted the families of Sultans lived together. As visitors enter the door of Topkapı Palace Harem their sense of anticipation is tangible.

Even today they envisage the possibility of meeting an odalisque, her long skirt trailing on the ground as she walks. The word harem originates from the Arabic harim, comprising the concepts of secrecy, inviolability and sacrosanctness that pervade the very walls of this place and marked life here over the centuries that it was a closed book to strangers. The harem section of Topkapı Palace was carefully situated so that it could not be seen from the state apartments and the courtyards where public affairs were conducted.

Harem Life
The secrecy associated with the royal harem and the harems of upper and middle-class Ottoman houses aroused the keen curiosity of foreign travelers and artists who visited Ottoman Turkey, but their written accounts and pictures of the harem were based for the most part on hearsay. With a few exceptions it was not until the end of the 18th century, during the reign of the enlightened reformist Sultan Selim III (1789-1807) that the architect and draughtsman and other artists were admitted to the palace harem to draw from observation instead of imagination.

The harem was home to the sultan himself, his mother, wives, daughters, sons, brothers, the high ranking female officials who managed the affairs of the household, hundreds of maidservants, and black eunuchs. In the royal harem, under the guidance of the sultan's mother or the principal officer of the harem household, a woman known as the chief treasurer, the girls were taught to read and write, play music, and the intricate rules of palace etiquette and protocol.

As an institution in Ottoman society the harem reflected the secluded privacy of family life. The cariyes or maidservants who served the women of the household were trained and educated in the skills and accomplishments thought appropriate for women at the time, and after a certain number of years in service allowed to marry.

Very few were honoured even by the privilege of waiting at the sultan's table, and still fewer became royal wives. After nine years of service the harem girls were given their manumission document, a set of diamond earrings and ring, a trousseau and some gold as their marriage portion, and suitable husbands found for them. They were renowned for their good breeding and for their discretion, never being known to reveal any intimate details about the royal family to outsiders.

The Imperial Harem (Harem-i Hümayûn) is one of the sections of the private apartments of the sultan. The harem was home to the Sultan's mother, the Valide Sultan; the concubines and wives of the Sultan; and the rest of his family, including children; and their servants. The harem consists of a series of buildings and structures, connected through hallways and courtyards. Every service team and hierarchical group residing in the harem had its own living space clustered around a courtyard.

The earliest parts of the harem quarters are the Golden Road, the sultan's private kitchen, and that section known as Eski Hasekiler. The service sections of the harem included kitchen, food cellar, baths, laundry, sick room and the dormitories of the maidservants and black eunuchs. As the population of the harem increased from the end of the 16th century onwards, mezzanines and additional buildings were constructed containing bedrooms for the serving women and self-contained apartments for the wives of the sultan.

Sultan Süleyman the Magnificent (1520-1566) took only his wife Hürrem Sultan and some women-in-waiting to this palace, the complete transferral of the harem from the Old Palace taking place during the reign of Murad III (1574-1595). On 24 July 1665, while Mehmed IV (1648-1687), his harem and household were at the palace in Edirne, a great fire broke out at Topkapı Palace, destroying the Palace of Justice, the Council of State, the Treasury, the Land Registry Office, most of the harem from the Carriage Gate to the Apartment of the Sultan's Mother, and the kitchens.

The 17th century the fire was started by a maidservant who had stolen a ring. Mehmed IV and his mother returned to Istanbul to inspect the situation, and the sultan ordered the construction of a new harem building whose interior walls were entirely decorated with tiles. This was completed in 1668, but since Mehmed IV and his successors who reigned during the second half of the 17th century lived for the most part at Edirne Palace, the harem at Topkapı did not regain its importance until the reign of Ahmed III (1703-1730), a period popularly known as the Tulip Era.

European baroque began to influence Turkish art and architecture at this time, and the Tulip Era is characterized by a new naturalistic style which is perhaps most strikingly exemplified by the painted wall decoration consisting of vases of flowers and plates of fruit in the Fruit Room of Ahmed III in the harem. The passion for garden flowers became evident everywhere, on clothing, furnishings and in architectural decoration, and extending even to the names of the harem women, who began to be given melodious Persian names that suggested they were as beautiful and graceful as flowers.

Later in the 18th century, rococo, with its delicate colour schemes and light romantic motifs, began to influence Turkish art, and the Pavilion of Osman III built on a terrace facing the Hünkar Sofası (Throne Room of the Harem) and the gracefully decorated wooden structures known as the Gözdeler Dairesi (Apartment of Favourites) above the Golden Road are typical of this later style.

Being supported by many dynasty palaces, mainly Old Palace, Topkapı Palace Harem constituted one wing of coverts kapıkulu staff in accordance with the Ottoman administration understanding. The concubines that were taken into Harem used to learn the Turkish-Islamic culture at best. Thus, a part of concubines that were raised as wifes for the Ottoman dynasty used to stay in Harem as administrative head of servants, whereas the best of them would be offered to Sultan and constitute the dynasty.

Another part of concubines used to be excluded from Harem with the condition that they would marry the chiefs at Enderûn. The hierarchy of Harem that went younger every year and spreaded the palace culture to the imperial domain depended on rules. The value of a woman in the Ottoman palace was related to her ability to give birth to a child. A concubine that is offered to Sultan would be displayed at Sultan’s Table and would be brought to Sultan’s own room if approved, upon a process that includes the preparation ceremonies at hamam.

The concubine that has relations with Sultan or gets close to him was called as Gözde. When Gözdes give birth to a child, they would be allocated a private apartment and be assigned as Prosperity or Head of Wives. The mother of heir to throne among those that do not exceed eight in every section, would be called as Haseki (Official Wife of Sultan), and had a real leverage as Sultan’s first wife even she would be listed after The Mother Of Sultan (Valide Sultan).

Harem Buildings
Harem has approximately 300 rooms, 9 hamams, 2 mosques, 1 hospital and dormitories as well as 1 laundry room. Harem that displayed a hierarchical development rather than systematic burned in 1665 on a large scale. Harem that survived today has been enlarged with the restorations after the fire and occasional expansions within time. General plan of Harem consists of dormitories that surround the entrances divided by doors one after another, rooms, pavilion and service buildings.

The number of rooms is not determined, with probably over a 100 of which only about a couple are open to the public. These apartments (Daires) were occupied respectively by the harem eunuchs, the Chief Harem Eunuch (Darüssaade Ağası), the concubines, the queen mother, the sultan's consorts, the princes and the favourites. There was no trespassing beyond the gates of the harem, except for the sultan, the queen mothers, the sultan's consorts and favourites, the princes and the concubines as well as the eunuchs guarding the harem.

The harem wing was only added at the end of the 16th century. Many of the rooms and features in the Harem were designed by Mimar Sinan. The harem section opening into the Second Courtyard (Divan Meydanı), to which the Gate of Carriages (Arabalar Kapısı) opens to, expanded over time towards the side of the Golden Horn and became a huge complex.

The buildings added to this complex from its initial date of construction in the 15th century until the early 19th century captures the stylistic development of palace design and decoration. Parts of the harem were redecorated under the sultans Mahmud I and Osman III in an Italian-inspired Ottoman Baroque style. These decorations contrast with those of the Ottoman classical age.

Topkapı Palace Harem Section, which was carefully hidden from the courtyards where the selamlık (meeting) and administration functions happened, divides the Harem residents into 4 groups through stony places stretching from the entrance of Gate of Carts to Private Room. The first section at the entrance is allocated to Black Eunuch Chiefs. After this, Harem’s Common Door follows and after that, it leads to paved courtyard that is surrounded by structures where Mother Of Sultans, sultans and princes live.

Prince Harems
The princes that were sent to Anatolia as Sancak Beyi up to the end of 16th century, used to bring their families with, including their Head of Wives who were their mothers. After that point, after the sultanate turned into old-becomes-Sultan (ekberiyet) procedure that stipulates the sultanate of the oldest dynasty man, the princes were made to live at Palace’s Harem. With this new system that enabled the brothers to become sultan as well, the sultan used to form his own harem staff with his mother, and send the rest to Old Palace.

The concubines could not marry the princes not to create rivals to dynasty, yet would be assigned. Sultan’s daughters used to marry viziers and paşas (generals) and live in hanım (wife) sultan palaces in Istanbul, and were granted with the right to divorce their husbands if they wished so.

Sultanate Of The Women
The Imperial Harem or Harem was one of the most important powers of the Ottoman court. Beginning in the 16th century and extending into the 17th, the Harem effectively controlled the Ottoman Empire (see Sultanate of the women). The harem had its own internal organization, and order of formulating policies.

The mother of a new sultan came to the harem with pomp and circumstance and assumed the title of Queen Mother (Valide Sultan) upon her son's accession. She was paramount chief and ran the Harem and ruled over the members of the dynasty. The Valide Sultan who influenced the political life of the Ottoman Empire during various periods of history had the authority to regulate the relations between the sultan and his wives and children. The Valide Sultan as a majestic symbol of the Ottoman dynasty wielded great power.

These scripts and photographs are registered under © Copyright 2018, respected writers and photographers from the internet. All Rights Reserved.
Posted by ISTANBUL, Extended On Two Continents at 11:36 AM