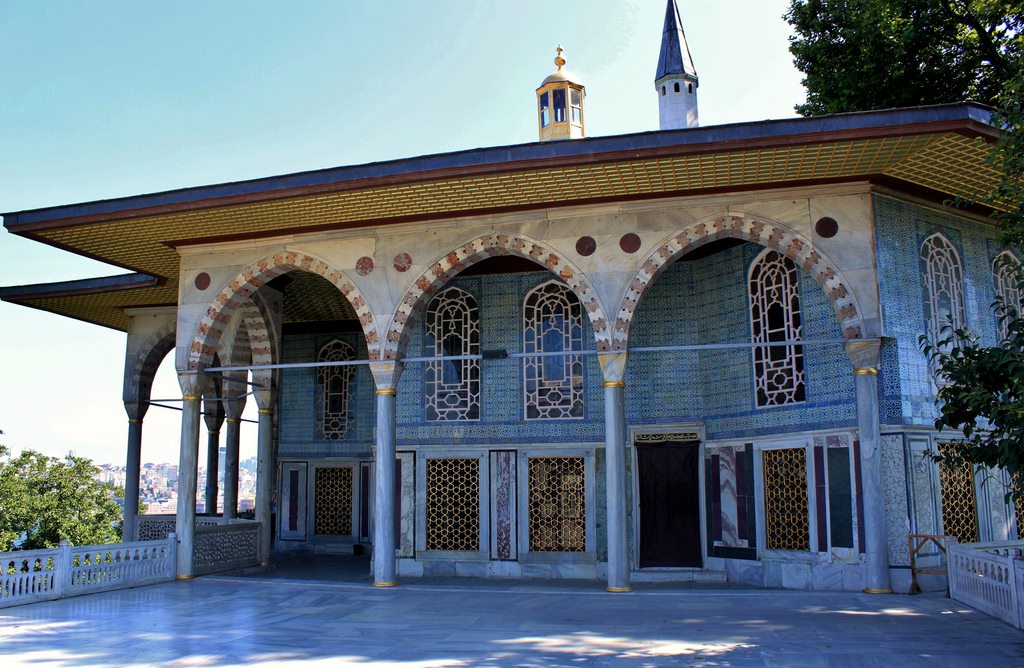 Located in the fourth courtyard of the palace. This pavilion is sited to allow uninterrupted views of the golden Horn, Galata and the Sea of Marmara. Built in 1639 on the orders of Sultan Murat IV, it is one of the best examples of Turkish art and architecture. Standing today in its original from the exterior is decorated with tiles and internally these are very rare decorations of arabesque painted on leather.

Built by the architect Koca Kasım, this pavilion is also eight sided, and Surrounded by marble columns supporting a broad overhanging roof line, in a circular portico. Like the Revan, the lower walls are of marble and the upper walls of tiles. The mother - of pearl and tortoise shell inlay work in the doors, window frames, and closets in the interior are excellent examples of Turkish workmanship.

This construction which is one of the most beautiful köşks, not only among those in Imperial Sofa, but also among those of palace that survived today was built in 1693 to commemorate the conquest of Baghdad by Murad IV. The wall spaces throughout are totally covered in tile. From the heavily decorated dome hangs a golf - leafed sphere. Seating divans line the wall insets covered in velvet fabrics. The solid bronze fireplace blends with the massive tile bird figures on either side.

It closely resembles the Revan Kiosk. The three doors to the porch are located between the sofas. The façade is covered with marble, strips of porphyry and verd antique. The marble panelling of the portico is executed in Cairene Mamluk style. The interior is an example of an ideal Ottoman room.

The recessed shelves and cupboards are decorated with early 16th century green, yellow and blue tiles. The blue-and-white tiles on the walls are copies of the tiles of the Circumcision Room, right across the terrace. With its tiles dating to the 17th century, mother-of-pearl, tortoise-shell decorated cupboard and window panels, this pavilion is one of the last examples of the classical palace architecture.

The doors have very fine inlay work. On the right side of the entrance is a fireplace with a gilded hood. In the middle of the room is a silver mangal (charcoal stove), a present of King Louis XIV of France. From the mid-18th century onwards, the building was used as the library of the Privy Chamber. The small room behind the mansion was used as coffee kitchen.

The köşk that was built for the memory of Baghdad victory was built on that place where a tower existed before at the end of terrace. In order to build the köşk, terrace required to be widened further towards Haliç direction. This köşk that has been one of the most successful, best protected examples was used as the library of Private Room along with Revan Pavilion starting from the mid- 18th century. The palace in the books in Baghdad Pavilion was turned over to Palace Library Collection.

The Koran verses inscribed on the cincture wrapping the building all around were written in white Celî Sülüs (a style of Arabic script with large letters used in writing inscriptions) characters on a blue background by Tophaneli Enderûnî Mahmut Çelebi, a famous palace calligrapher of the era. The couplet in Persian language inscribed above the gate to the pavilion includes the Kelime-i Tevhid (The Word of Unity: Islamic declaration of faith in the oneness of God).

These scripts and photographs are registered under © Copyright 2018, respected writers and photographers from the internet. All Rights Reserved.
Posted by ISTANBUL, Extended On Two Continents at 10:54 AM