The Fourth Courtyard (IV. Avlu), also known as the Imperial Sofa (Sofa-ı Hümâyûn), was more of an innermost private sanctuary of the sultan and his family, and consists of a number of pavilions, kiosks (köşk), gardens and terraces. It was originally a part of the Third Courtyard but recent scholars have identified it as more separate to better distinguish it. 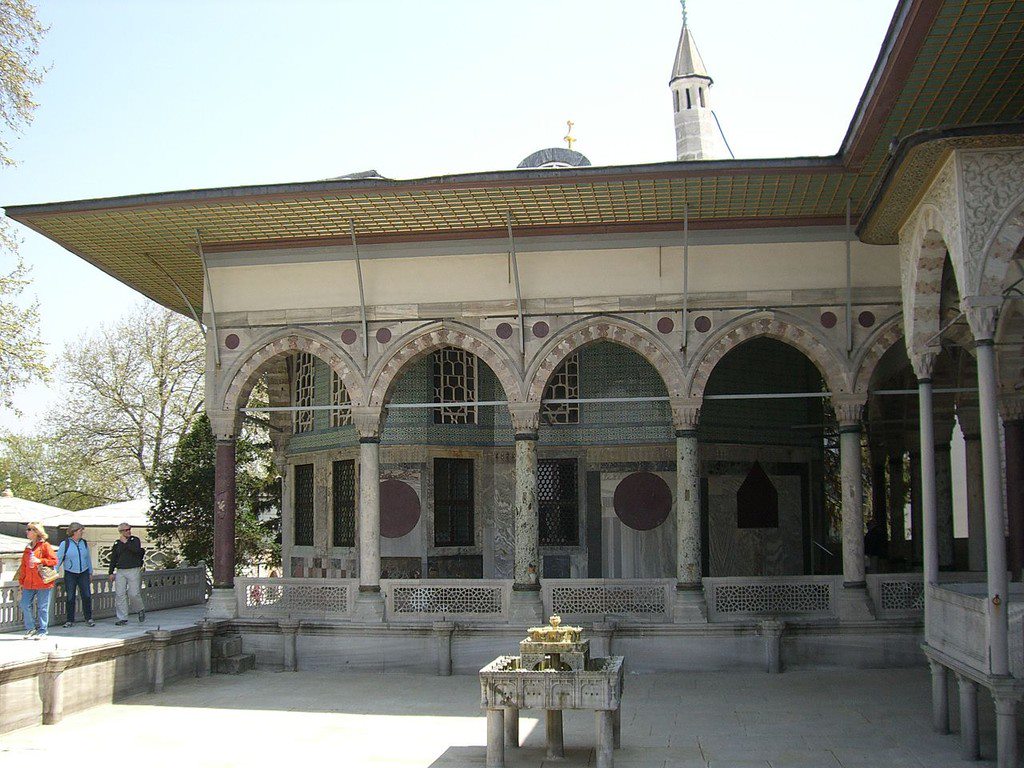 The Revan Pavilion was built in 1635 under Sultan Murat IV (1623-1640) to the memory of the conquest of Yerevan (Revan), on a piece of land gained by reducing the size of the pond that existed on the Sofa-i Hümâyûn since the time of Sultan Mehmet the Conqueror (1451-1481). The pavilion believed to have been conceived by the Head Architect of the period, Koca Kasım Ağa, with an octagonal floor plan has three iwans.

The ceiling of the gazebo situated between the two iwans on the east flank overlooking the Tulip Garden is inscribed with some of the verses of the Kaside-i Bürde (a sacred poem). On an octagonal layout, it is a single room, whose walls to the window edge are marble, and above are tile work. There is a double line of windows decorated in mother -of -pearl and tortoise shell. The central brazier was a gift of the French King Louis XV, to Sultan Mahmut I, made by Duplesisa, a famous worker in bronze of the time.

In 1733, during the reign of Sultan Mahmut I (1730-1754) a foundation library consisting of extremely valuable books, mainly of history, destined to the use of the Imperial Pages (Has Odalılar), was established in the wood cabinets of the pavilion. The library which was further developed by Sultan Osman III (1754-57) and Sultan Mustafa III (1757-1774), has been included in the collection of the Palace Museum Library when the palace was converted into a museum.

On our way to the Baghdad Pavilion, the heavily tiled outer wall of the Circumcision Room is seen, and next the lovely gilt - bronze baldachin of Sultan İbrahim dating from 1640. It was here that the sultan broke his daily fasting at sunset during the Month of Fasting (Ramazan). Like the sultan himself, let us break our tour here, and enjoy the same lovely overlook of the city which this position affords us. From here, we ill then proceed to the Baghdad Pavilion.

The köşk that was built for commemoration of conquest of Revan by Sultan Murad IV was constructed on the terrace in an area that was obtained upon shrinking and reshaping of the pool that existed in Imperial Sofa since Sultan Mehmed II. Köşk has a octagonal shape and has three balconies. The Revan Kiosk (Revan Köşkü) served as a religious retreat of forty days. It is a rather small pavilion with a central dome and three apses for sofas. The fourth wall contains the door and a fireplace. The wall facing the colonnade is set with marble, the other walls with low-cost İznik blue-and-white tiles, patterned after those of a century earlier.

The fact that Revan Pavilion is mentioned as "Turban Room (Sarık Odası)" in some of the Ottoman sources is related to the fact that the turbans that represented the Ottoman Sultan were safeguarded here by Cheesecloth Servant (Tülbent Gulamı). Also, Holy Relic Section (Hırka-i Saadet) and other sacred articles used to be transferred to Revan Pavilion during the cleaning of Private Room every year in Ramadan month.

Sultan Mahmut I created an utmost valuable predominantly history books-library in this köşk for those in Private Room. The library that was further enlarged by Sultan Osman III and Sultan Mustafa III had been returned to Palace Library Collection when the palace was transformed into museum. Köşk is open to visits.

The Revan Pavilion is also called sarık odası (turban room) by some sources with reference to the fact that the sacred relics were kept there during the Chamber of the Holy Mantle’s traditional cleaning ceremony attended by the sultans.

The Revan Kiosk is one of the finest examples of the classical Ottoman mansion style. It is a relatively small pavilion with a central dome and three apses. The projecting eaves decorated with Iznik tiles, central dome and delicate woodwork in recessed cupboards and doors are worth seeing.

These scripts and photographs are registered under © Copyright 2018, respected writers and photographers from the internet. All Rights Reserved.
Posted by ISTANBUL, Extended On Two Continents at 10:49 AM