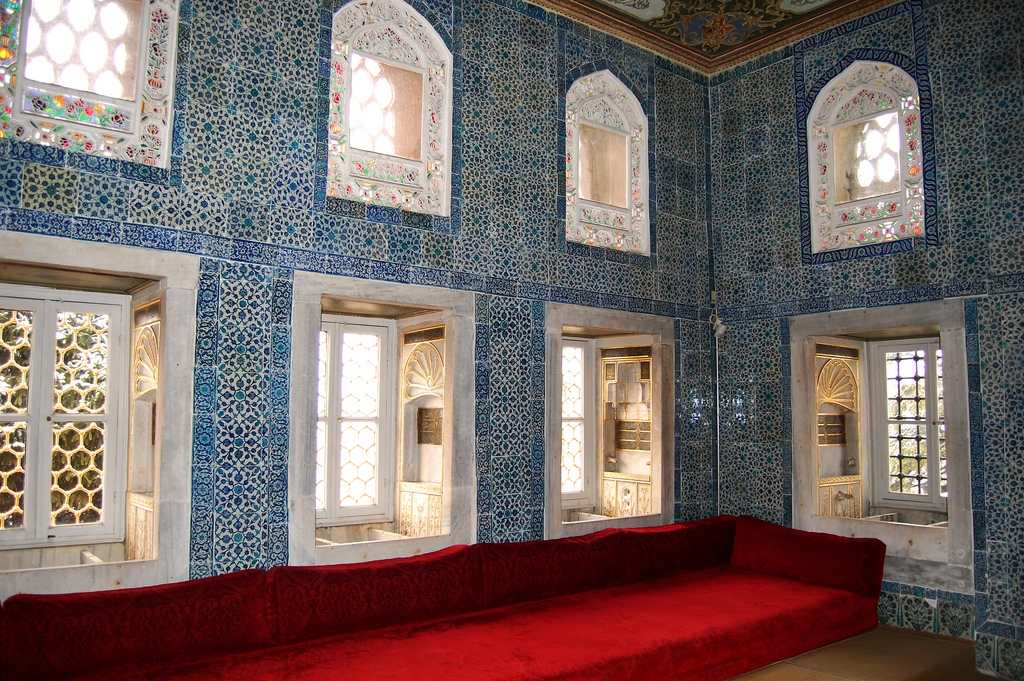 The literal meaning of the word harem in Arabic language is, “a holy place that everyone is not allowed to enter”. In  Muslim societies, it is a notion which defines intimate family life. In Ottoman tradition, the word "Harem" was used in two different senses. First, "the sultan's harem" i.e. his family, and the second meaning would have referred to the space where his family lived. Besides constituting the core of the dynasty, the palace harem forming a wing of the cadre of sultan’s household officials recruited via devshirme (devşirme) - a system of recruitment of youngsters of foreign background for serving the Ottoman Empire - was also  an environment serving the purpose of creating a sound state aristocracy by wedding the concubines having received a disciplined education to the recruit-aghas (squires) who had been thoroughly educated and trained at the Palace’s Enderûn School.

The Topkapı Palace Harem was the living space of the  Sultan, the Queen Mother,  the sultan’s women, children, brothers and sisters and servants and concubines and Black Eunuchs who were the protectors of the Harem. This set of structures, which constituted the private and prohibited space of the Ottoman dynasty, underwent a constant evolution from the 16th until the beginning of the 19th century, displaying a great variety of building styles changing with each period, hence forming an extremely important and interesting complex from the point of view of architectural history. Expanded in time through the additions made by each sultan, the Topkapı Palace Harem today consists of about 300 rooms, 9 baths, 2 mosques, 1 hospital, 1 laundry, and numerous wards of different kinds.

The living spaces of  all the service groups integrated within the institutionalization system of the Harem were gathered around a common courtyard. The fact that the pebble stone walking path ends at the Fireplace Chamber constituting the entrance to the private quarters of the Sultan, highlights the sovereign’s itinerary

The Imperial Harem (Harem-i Hümayûn) occupied one of the sections of the private apartments of the sultan; it contained more than 400 rooms. The harem was home to the sultan's mother, the Valide Sultan; the concubines and wives of the sultan; and the rest of his family, including children; and their servants. The harem consists of a series of buildings and structures, connected through hallways and courtyards.

Every service team and hierarchical group residing in the harem had its own living space clustered around a courtyard. The number of rooms is not determined, with probably over 100, of which only a few are open to the public. These apartments (Daires) were occupied respectively by the harem eunuchs, the Chief Harem Eunuch (Darüssaade Ağası), the concubines, the queen mother, the sultan's consorts, the princes and the favourites. There was no trespassing beyond the gates of the harem, except for the sultan, the queen mother, the sultan's consorts and favourites, the princes and the concubines as well as the eunuchs guarding the harem.

The harem wing was only added at the end of the 16th century. Many of the rooms and features in the Harem were designed by Mimar Sinan. The harem section opens into the Second Courtyard (Divan Meydanı), which the Gate of Carriages (Arabalar Kapısı) also opens to. The structures expanded over time towards the Golden Horn side and evolved into a huge complex. The buildings added to this complex from its initial date of construction in the 15th century to the early 19th century capture the stylistic development of palace design and decoration. Parts of the harem were redecorated under the sultans Mahmud I and Osman III in an Italian-inspired Ottoman Baroque style. These decorations contrast with those of the Ottoman classical age.

End of 15th  to mid-16th Century
The Old Palace in Bayezit was used as a Harem following the conquest of Istanbul in 1453. However, the  Women's Palace (Saray-ı Duhteran) situated along the Golden Road is believed to have been the Harem nucleus belonging to the initial phase of the palace construction. Women brought from the Old Palace to the Topkapı Palace upon the Sultan’s demand were temporarily accommodated at this dwelling.  This apartment is today the section called the Haseki  (Sultan’s favoured wife) quarters. It was probably remodelled several times. Since women did not yet reside in the Harem at this early stage, large staffs of concubines and eunuchs  were not deemed necessary.  Another building of that first period is the tower-mansion  called the “Sultan Selim I Tower” located adjacent to the exit of the Harem’s Privy Chamber.

Period of Sultan Süleyman the Magnificent (1520-1566)
It was established that the building up of the Topkapı Palace Harem actually began following the settlement of the favoured wife of Süleyman the Magnificent, Haseki Hürrem Sultan at the Topkapı Palace. During this period, several wards were built adjacent to one another but without being interconnected for the concubines and the Black Eunuchs. The former Privy Chamber which formerly existed on the emplacement of the dwelling currently called the Privy Chamber of  Sultan Murat III,  is known to have been built by Süleyman the Magnificent.  The First Woman (Baş Haseki) apartment came to be referred to under the name of Hürrem Sultan since then.

Period of Sultan Murat III (1574-1595)
The institutionalization of the harem was completed in this period. The early construction style developed around landscape-exposed open spaces evolved, during the 10-year-long construction phase, towards structures gathered around privacy-oriented enclosed inner courtyards.   Buildings rising on pillared base structures due to the topographical circumstances of the area were endowed with rich façades in harmony with the classical architecture concept of the period. These rich façade configurations also represented the hierarchical order of the Harem. The Head Architects of the era were Mimar Sinan and Davut Ağa. The Concubine wards; the Apartments of the Queen Mother; the double baths; The Imperial Hall (Hünkâr Sofası), also known as the Imperial Sofa; the Privy Chamber of  Sultan Murat III and the Crown Prince quarters were all erected during that period.

17th -18th Centuries
The Privy Chamber of Sultan Ahmet I , the Privy Chamber of Sultan Ahmet III, the Kiosk of Sultan Osman III, the Apartments of Sultan Selim III and the Mihrişah Sultan Quarters constructed above the Apartments of  the Queen Mother, the Twin Kiosks, the Interval (Mabeyn) and Favourites (Gözdeler) apartments were built after the 1665 fire, by applying  Baroque and Rococo style decorations onto the structures. The reason behind the proliferation of constructions during this period was the gradual changes occurred in the governing style as well as customs and tastes of the dynasty.

These scripts and photographs are registered under © Copyright 2018, respected writers and photographers from the internet. All Rights Reserved.
Posted by ISTANBUL, Extended On Two Continents at 11:24 AM