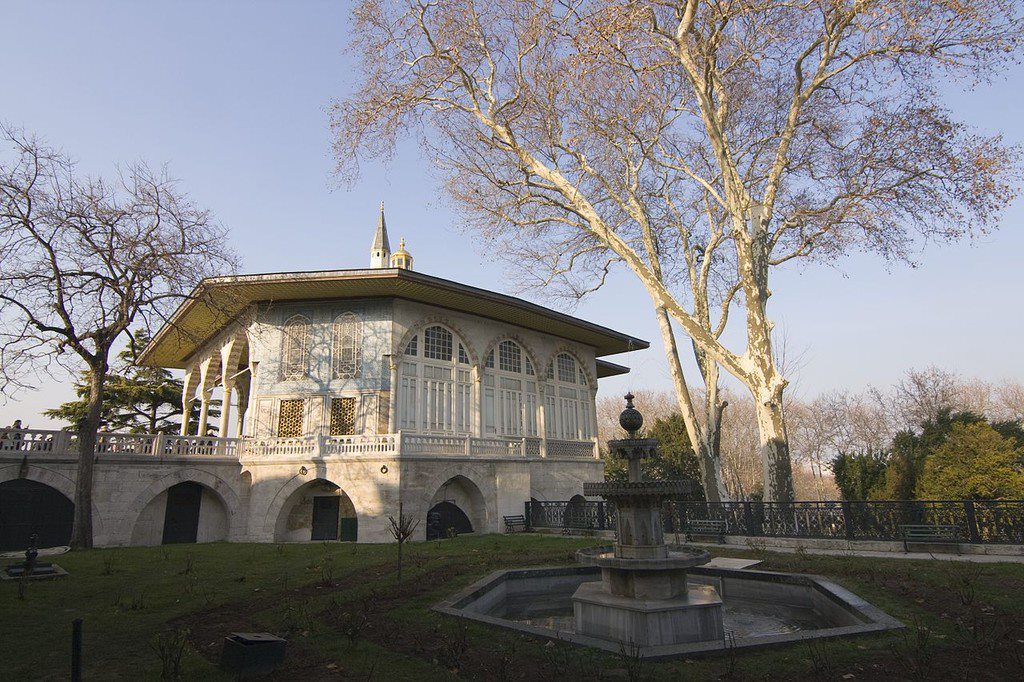 The Fourth Courtyard (IV. Avlu), also known as the Imperial Sofa (Sofa-ı Hümayun), was more of an innermost private sanctuary of the sultan and his family, and consists of a number of pavilions, kiosks (köşk), gardens and terraces. It was originally a part of the Third Courtyard but recent scholars have identified it as more separate to better distinguish it.

The Fourth Place consists of the Tulip Garden and the terrace called Imperial Hall (Sofa-i Hümayun). The Pond Terrace also called Marble Hall was extended in the direction facing the Golden Horn with the addition of new pavilions in the first half of the 17th century under Sultan Murat IV (1623-1640) and Sultan Ibrahim (1640-1648). The arcades of the Marble Sofa took their current form in 1916.

The wooden Hall Kiosk used as privy chamber by the sultans and the Stone Pavilion / Hekimbaşı (Chief Physician) Tower located in the Lale (Tulip) Garden below the Pond Terrace have survived up until our present-day. There were various vineyards and fruit trees including orange and lemon trees in addition to the multitude of flower beds adorned with a variety of roses, tulips, hyacinths, carnations and jasmine flowers in the Tulip Garden.

On the Tulip Garden wing facing the Sea of Marmara is located the Grand Kiosk, also known as the Mecidiye Kiosk, Grand Pavilion or Kiosk of Sultan Abdülmecit I (Mecidiye Köşkü), built in Empire style in 1840, which was the last significant addition to the palace, along with the neighbouring Wardrobe Chamber (Esvap Odası) and the Hall Mosque (Sofa Camii), built on the orders of Sultan Abdülmecit I. The Tulip Garden is connected to the current public leisure ground Gülhane Park, the old imperial rose garden, through the towered Mabeyn (Interval) Gate.

The royal architect Hasan Ağa under Sultan Murat IV constructed during 1635-1636 the two Revan Kiosk (Revan Köşkü) and in 1638-1639 the Baghdad Kiosk (Bağdat Köşkü) to celebrate the Ottoman victories at Revan and Baghdad. Both have projecting eaves, a central dome and interior with recessed cupboards and woodwork with inlaid nacre tesserae. Both are based on the classical four-iwan plan with sofas filling the rectangular bays.

These scripts and photographs are registered under © Copyright 2018, respected writers and photographers from the internet. All Rights Reserved.
Posted by ISTANBUL, Extended On Two Continents at 3:01 AM