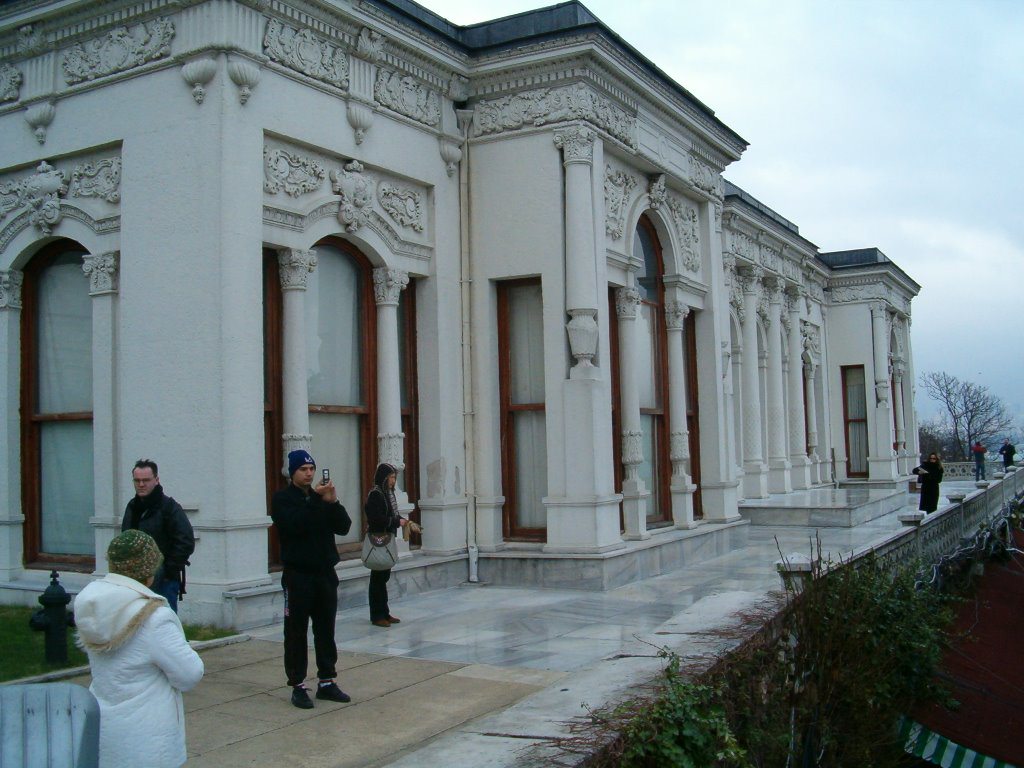 The Grand Kiosk, also known as the Mecidiye Kiosk, Grand Pavilion or Kiosk of Abdül Mecid I (Mecidiye Köşkü), built in 1840, was the last significant addition to the palace, along with the neighbouring Wardrobe Chamber (Esvap Odası). Both were built on the orders of Sultan Abdül Mecid I as an imperial reception and resting place because of its splendid location, giving a panoramic view on the Sea of Marmara and the Bosphorus.

This pavilion is located at the east end of the palace. Built by Sultan Abdülmecid it, has the distinction of being the last Sultan's pavilion constructed at the Topkapı Palace, as after this Sultan moved from this palace. Built on the Empire Style this singular storied rectangular building was designed by the architect Sarkis Balyan. The external facade's ornamentation is particularly noteworthy.

It is the last sultan pavilion that was built in Topkapı Palace. The residence location of the Ottoman Dynasty during Sultan Adbülmecid was newly built Dolmabahçe Palace. It must have been built because he wanted to have a pavilion that was named after himself and where ascending-to-throne ceremonies would be held as it was being held similarly in Topkapı Palace during his ancestor’s times.

The pavilion and the room that was designed fitting to contemporary western architecture style added a mixed foreign eclecticism to traditional architecture understanding and texture of the Ottoman and palace and is in a great scale.

The sultans would stay here whenever they visited Topkapı from their seaside palaces. These constructions were erected on the vaulted basement of another kiosk dating from the 15th century. The architect Sarkis Balyan constructed it in an eclectic Europeanized style, mixed with traditional Ottoman style. Inside it is furnished in the Empire style. The two buildings were also used occasionally to accommodate foreign guests.

It was erected on the vaulted basement of the Third Place and Tent Kiosks dating from the 15th century; certain parts of the basement walls and foundations underneath date from the Byzantine period. During the late period where the Sultans had moved their permanent residence to the Dolmabahçe and Yıldız Palaces, they would visit the Topkapı Palace only for brief journeys and stay at the Mecidiye Pavilion when they would come here for their Accession to the Throne Ceremony (Cülus) or their processional visits to the Mantle of Felicity.

The wall is made of coarse sandstone. The interior is lighted through large windows. There are three entrances on the main front. The middle gate leads to a staircase descending to the basement. To the left, there is the Selamlık, Mabeyn section. The kiosk commands a panoramic view, which stretches the angle vision to comprise the Princes Islands and the Marmara Sea. It has also a wide terrace paved with marble slabs.

These scripts and photographs are registered under © Copyright 2018, respected writers and photographers from the internet. All Rights Reserved.
Posted by ISTANBUL, Extended On Two Continents at 12:37 PM