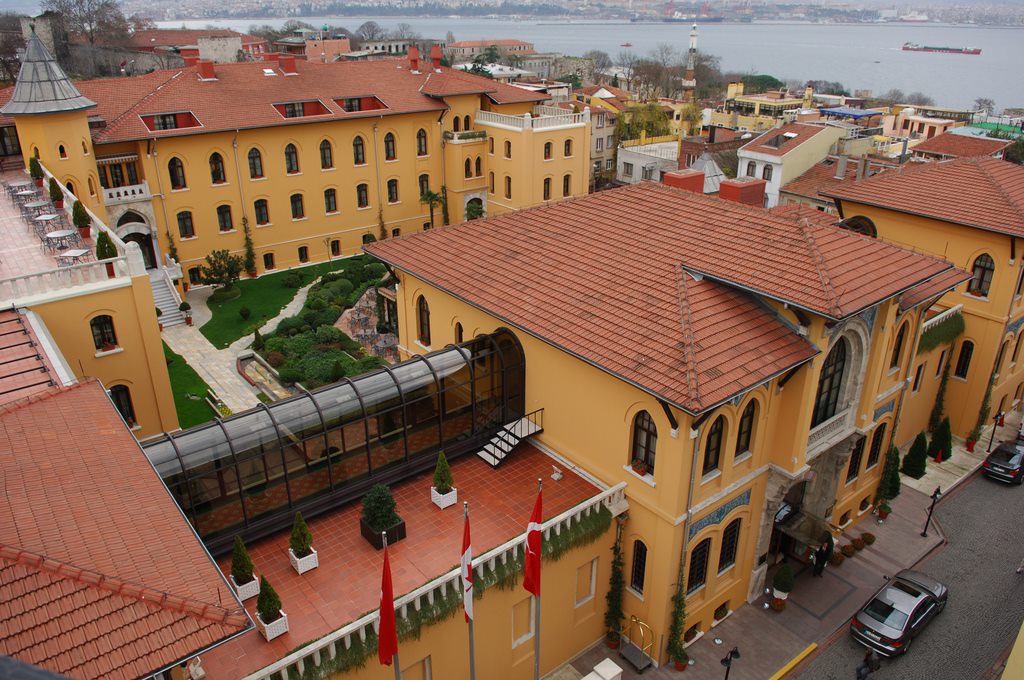 Sultanahmet Prison (Turkish: Sultanahmet Cezaevi), a former prison in Istanbul. It is located in Sultanahmet neighborhood of Fatih district on the historical peninsula. Built in 1918 / 1919, it was the first jailhouse in the capital of the Ottoman Empire, constructed in a contemporary concept considering the regulation of the daily life and relationship with the outside of inmates, who were awaiting trial or serving brief sentences.

The building was designed in Turkish neoclassical style in the beginning of the period called "First National Architecture". It was built next to the courthouse building, which was constructed in 1845 initially as university (Ottoman Turkish: Darülfünun). An inscription in Ottoman language upon the main gate of the building states the name of the facility as the "Capital City Murder Jail" (Ottoman Turkish: Dersaadet Cinayet Tevkifhanesi). It is a four-story building with guard towers enclosing a courtyard.

In the jailhouse, juveniles and women were also detained. Following the establishment of the Sağmalcılar Prison, the inmates were transferred to the new site and the jail was abandoned on January 25, 1969. Later during the military rule, the building continued to be used as a military jailhouse.

In 1992, after a long period of neglect, a redevelopment project was considered to convert the building into a hotel. The jailhouse, having great significance in terms of history of art and architecture, was renovated and opened in 1996 as a deluxe hotel of the Toronto-based Four Seasons Hotels and Resorts chain.

Four Seasons Hotel Istanbul at Sultanahmet is an intimate retreat of just 65 rooms and suites located in a former prison in the centre of Istanbul’s Old Town. The three-storey, neo-classic building wraps around a landscaped, courtyard garden - formerly the prisoners’ exercise yard - and neighbours some of the city’s most impressive historical monuments. Opened in 1996, the Hotel is one of the jewels in Four Seasons’ crown, most recently named "Best Small Hotel in Europe - 2012 by Travel & Leisure’s coveted annual readers" poll.

The UNESCO World Heritage Sites of Topkapı Palace, Haghia Sophia and the Blue Mosque are just a couple of minutes stroll from the Hotel. In keeping with this privileged location, the Hotel’s interiors and decoration pay homage to the city’s rich Ottoman heritage. Shuttered windows and arched doorways open to reveal well-lit, uncluttered spaces; decorative Ottoman artefacts and antique rugs are incorporated amongst neoclassical furniture and welcoming Turkish sofas. The resultant effect exudes an easy, homely ambience that belies the exclusivity of the address.

The Hotel’s restaurant, Seasons, is located within a glass pavilion that forms the focal point of the lush, courtyard garden; here, International and Turkish fine dining come together. Turkish traditions are also evident throughout the Hotel in the warmth of the welcome and consistently high level of service – both exceptional, even by Four Seasons’ standards.

Inside, the prison’s original wooden doors, a multiple-arched hallway opens onto a series of inviting lounges - simple and relaxing yet richly decorated with Ottoman tapestries, antique rugs and paintings. Ottoman traditions are further mirrored in the mural-style artworks by Timur Kerim Incedayi, which also complement the cosy, residential appeal of the ‘Blue Room’ lounge and lobby areas.

Sensitively preserved details throughout the Hotel recall its fascinating history: from the courtyard watchtowers (now housing the elevators) to torque-like brass rings and an inmate’s poignant engraving on an old marble pillar. The use of local materials and decorative geometric motifs further evoke Turkey’s rich history and link the regenerated interiors to the traditional artefacts on display.

The Hotel features a total of 347 windows - a surprising number considering its size and previous use. Light and airy interiors are decorated in warm, natural tones, which defer to the vibrant beauty of the landscaped courtyard and historical monuments beyond. Three-dimensional mosaic artworks by local artist, Hulya Vurnal Ikizgul, bring a simple yet powerful beauty to alcoves and walls both within the Hotel and courtyard, providing an appealing synergy between the indoor and outdoor areas.

ACCOMMODATIONS
With 65 Old City Istanbul luxury guest rooms and suites circling a manicured courtyard where birds sing and a fragrant herb garden gives off an enticing smell, Four Seasons Hotel Istanbul at Sultanahmet provides an intimate enclave in the heart of the city.

Wedding Planning
From invitations to wedding cakes, floral creations to memorable farewells, our team of event planners and experts will simplify your planning and make your wedding in Istanbul everything you have ever imagined, whether it's a private ceremony for two, a week-long celebration with family, or an outdoor event on our rooftop terrace overlooking the Blue Mosque.

Honeymoon
Spend sunny days and food-and-music-filled nights in a peaceful oasis and Ottoman landmark in the heart of Istanbul's historic centre. We'll do everything we can to make sure you get the most out of this special time.

These scripts and photographs are registered under © Copyright 2018, respected writers and photographers from the internet. All Rights Reserved.
Posted by ISTANBUL, Extended On Two Continents at 3:06 PM